How Does it Feel at Velocicoaster, America’s Scariest Roller Coaster? 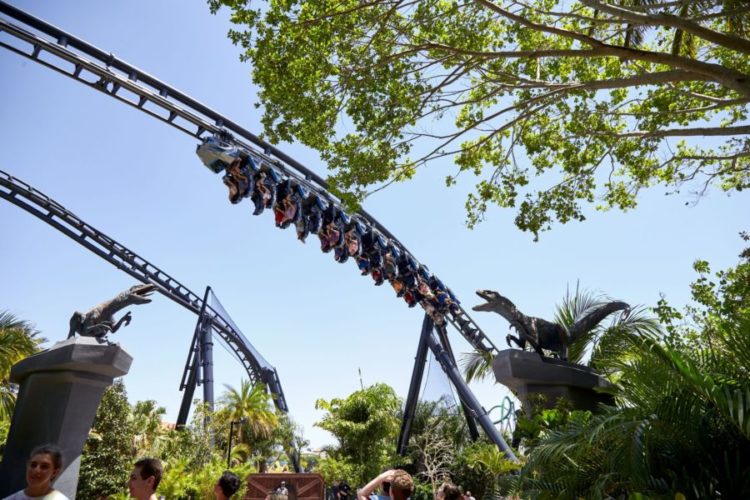 Many people are talking about the new dangerous ride known as VelociCoaster. Have you heard about it? It is giving many people the chills. Most of the rollercoasters in Universal Studios Florida and Islands of Adventure are known for their wow factor. The Hulk was considered the dangerous among them. “Hulk has a cool beginning”. or “Rip Ride Rocket has the tightest turns at the end”.

But when coming to the VelociCoaster it stands out on many points. For one thing, it has a dinosaurs theme. You must have seen the intelligent and deadly dinosaurs in the Jurassic Park movie called Velociraptor. Yes, you guessed it right. The rollercoaster is called as VelociCoaster. Here you can find out all the details of VelociCoaster.

How fast does the VelociCoaster ride go?

The VelociCoaster is a steel launched coaster. The designers of the coaster are Universal Creative and the manufacturer is Intamin. Do you know how tall it is? It stands at 155ft (47m) tall. Then it can reach the maximum speed of 70 mph down 4,700ft (1,400m) tracks. Further, it has two high-speed launches powered by linear synchronous motors. At last, the drop is 140ft (43m) drop with four inversions.

The Velociraptor is a replacement for the long-closed Triceratops Encounter. It was first opened on Florida resort in June 2021 and it is located at Jurassic Park-themed Islands of Adventure. Within 2.4 seconds the ride can launch riders 70 mph. Therefore it is the fastest launch coaster in Universal Park right now.

The guests riding the coaster can experience 360-degree inversions and the air-time is extreme. It is 155ft tall which gives the riders the birds-eye view so the VelociCoaster is the tallest roller coaster ride in Florida.

Can you feel the drop on VelociCoaster?

Many people ask the question after seeing the VelociCoaster? Is it really scary? Can I feel the drop? The people who usually are brave-faced when they sit on rollercoasters found the VelociCoaster terrifying. Mostly it is not because of the raptors but the drop. The entire ride is very surprising. There are drops in places where one does not expect. There is a left turn in one place and suddenly a long drop. This scared many riders. You may really do not know what is happening once you sit on the seat. So we can rate the rollercoaster a fun scream, not a frightening scream.

The rollercoaster narrates the events before Jurassic World. The main attraction of the coaster for many people is the Jurassic World theme. The VelociCoaster is designed in a way to mimic the raptor’s cage in the movie. The main characters of the film appear in the videos. Chris Pratt, Bryce Dallas Howard, and BD Wong talk with the riders throughout the queue. The riders will feel that they are entering the raptor’s cage to sight-see it. Overall it is a fun adventure ride with lots of pluses. Are you ready to try it?

How is the VelociCoaster queue?

@UniversalORL thank you for an absolutely incredible 2 days you did not disappoint leave you with a little scenic #velocicoaster video hope you enjoy it and thank you again. your entire staff was incredibly accommodating to use and our special needs (disabilities) as a family. pic.twitter.com/9Bre2bUzE2

The queue of the VelociCoaster starts from outside the lower floor of the Discovery Center. The two raptor statues can be seen on display at the entrance. Then the paddock has neon lights and the rollercoaster launches outside the building. For the areas that stretch outdoors, there is an extended queue area. It offers close-up views of the tracks. There are video projections showing the raptors chasing each other.

Also, there is an examination room like in the Jurassic world film where two animatronic Velociraptors are caged and muzzled. Many attractions of the film are also present like the Gyrosphere Valley, T-Rex Kingdom, and the Mosasaurus show. The videos of the characters Claire Dearing and Owen Grady are also present.

Is VelociCoaster scarier than the Hulk?

If you want to ride the VelociCoaster then you have to know these facts. Here we are listing the facts for you again. One thing is that it is 4,700 feet long. Also, you will be traveling at 70mph in that peak height. Many people are now comparing the VelociCoaster with Hulk. Now it is official news that VelociCoaster cannot match the interesting storytelling theme of Hagrid’s Magical Creatures Motorbike Adventure but it has overreached The Incredible Hulk as Universal’s most thrilling coaster.

So we can say that VelociCoaster is scarier than Hulk. On the rollercoaster, the riders can find exciting river flumes and the kids-focused Pteranodon Flyers. Both adults, as well as children eligible to ride on it, can have fun. It is not an attraction for all people because some hate to ride on dangerous rollercoasters. But still, it is a must-ride.

The VelociCoaster has full of 360-degree inversions, dynamic inverted stalls, sharp turns, and more. The specs are extreme in some areas. For instance, the riders will not slow down but speed up 70mph in less than 3 seconds. Then it immediately launches one up to the 155-foot pinnacle of the ride. After that, the riders plummet downwards next to the entrance of the queue. But at this point, the ride is only half complete. There is a lot more action to look forward to in the next couple of minutes.

The rollercoaster is smooth as well. Some coasters are known for their intense action and the riders will end up with a headache. But the Velociraptor is really smooth. It is scary to ride on it but not inconvenient. The riders will not be jerked right and left. They can focus on how high they go on the ride, so they may not end up with any bruises after it is over.

VelociCoaster is the scariest roller coaster in Florida. It has many attractions that will offer you the thrill you seek.

Also read: Explore Top 10 of The Scariest Railway Routes Around The World That Would Run Chill Down Your Spine