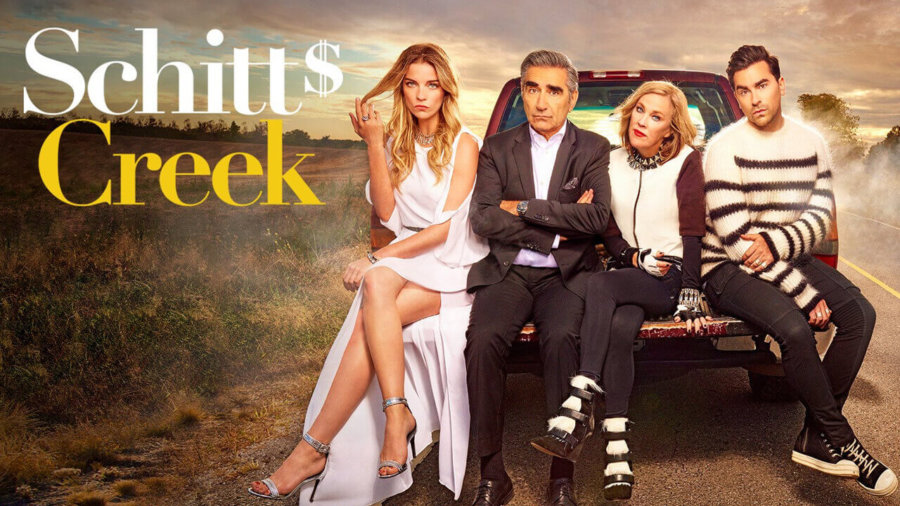 Schitt’s Creek is a well-known Canadian sitcom. It was released on CBC Television and ran from 2015 to 2020. Also, it spanned six seasons. The series narrates the story of the wealthy Rose family who gets defrauded of all their fortune. They experience many problems as they move to Schitts Creek. This is a small town which they bought as a joke when they were rich. So in the new town, they live in a motel and learn to adjust to living without money.

The series became a great hit after its third season. Many people love it for its humor and acting. Further, it set a record for receiving most Emmy awards for a comedy series. Here you can find the details about Schitt’s creek season 6. Also, know if there will be Schitts creek season 7.

The idea to make a show came to Dan Levy. When watching reality TV shows he imagined how would the Kardashians behave if they don’t have money? Then he shared this idea with his father Eugene Levy. They both improvised on that idea. So this is the story behind the creation of Schitt’s Creek.

Most of the series will lose their followers after the third or fourth season. There will be a decline in viewership. But it happened differently with Schitt’s Creek.  The series viewership increased in the third season because it started to stream on Netflix. So many people viewed the series from the third season on the streaming platform and loved it. Schitt’s Creek also became popular for its portrayal of LGBTQ+ characters.

Season 6 of Schitt Creek received record-breaking ratings. It came to an end during the spring of 2020. The ending was great but it saddened many fans.

Is Schitt’s creek season 6 the end of Schitt Creek?

When asked in an interview if there is a chance for Schitt Creek season 7, Dan Levy revealed that season 6 will be the last. He is the co-creator of the series so he shared that there is no plan to continue the storyline of the series. Also, he thinks it is a great ending for the series.

But Schitt creek may get rebooted in the future or there may be a revival. There is a possibility for this. But for now, season 6 of Schitt Creek is a suitable ending for this popular series.

Will there be a Schitt’s Creek film?

After the series finale, Dan Levy was asked if there is a possibility of a film adaptation of Schitt’s Creek. He expressed his interest in making a film even though there are no definite plans. He thinks that season 6 was a nice way to end the season. But if any idea pops into their heads then they may make a film.

So this is great news for the fans of the series. Let’s hope for the creators to get a great idea to continue with Schitt Creek.

Who is the Schitt’s Creek cast?

Schitt’s Creek has a set of great cast members. The series creator Eugene Levy plays the role of Johnny Rose. Then his son David Levy plays David Rose in the film. Their father and son chemistry is also present in the series.

Joining the main cast is Catherine O’Hara who acts as Moira Rose and Annie Murphy as Alexis Rose. Some of the other members of the cast are Chris Elliott as Roland Schitt, Jennifer Robertson as Jocelyn Schitt, Noah Reid as Patrick, and more. These are the wonderful Schitt’s Creek cast.

How did Schitt Creek end?

The last season of the series is season 6. It gave everyone a happy ending they deserved. David Rose is busy as he is planning his wedding with his fiancé Patrick. They both plan to buy a small cottage in Schitt’s Creek. Also David decides to stay at Schitt Creek and help with Patrick’s business. On the other hand, Alexis gets a job in New York as a publicist. So finally her hard work paid off.

Further their parents are focused on their career advancement. Johnny Rose is trying to fulfil his motel dreams in California. With his business acumen, he will certainly achieve his goals. Then Moira Rose is trying to get a break on soap operas again. She gets a chance to act in the reboot of Sunrise Bay. Therefore the husband and wife decide to move to California to accomplish their dreams. So they both depart from Schitt’s Creek.

The series got over without any added drama or twist. So the ending was very simple. In the end, the Rose family got a place in the town of Schitt’s Creek. They made identities for themselves in the town. This is what the series is all about.

Schitt’s Creek is an excellent series that showed us how a family experiences trials and tribulations. But their difference in circumstances only makes their bond stronger.

You may also like: Basketball Wives Season 10 Release Date, Cast and Plot