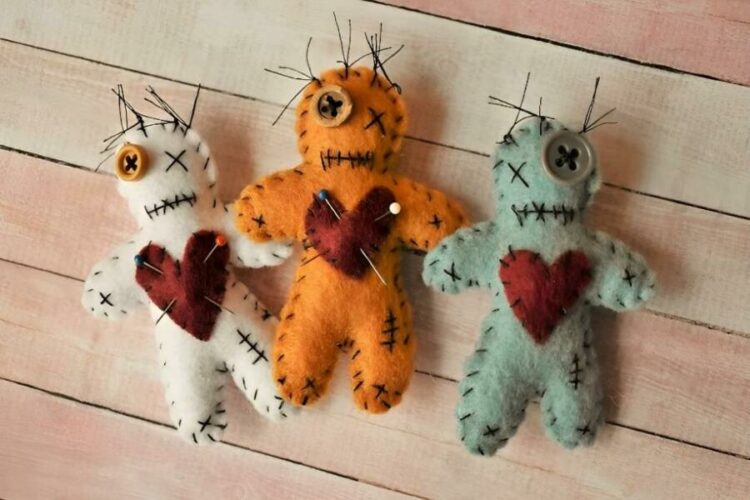 When you think about voodoo dolls, what comes to your mind first?  Isn’t it what we see in popular films, literature, and oral tales? As the concept of voodoo dolls incites terror. It also conjures up ideas of bloodthirsty, violent revenge. Isn’t it? The victim is cursed with bad luck and suffering, and possibly even dies once. It happens when someone inserts pins into the doll, the voodoo doll.

However, it’s confidential. It’s debated again and again as if it does offer anything or has a real meaning to it. However, It has a meaning to its existence if you only entrust it. Anyway, believe it or not, you can’t deny that it is fun to make! Handy and enjoyable all at once!

So let’s learn how to make a voodoo doll.

A Little Way Back to History

Voodoo translates as “spirit of God.” According to legend, three main varieties of voodoo are still performed today: West African, Louisianan, and Haitian. More than 50 million people practice Voodoo worldwide, and a key component of their faith is communicating with “Loas,” unique spirits who communicate with mortals.

Do you believe that? If so, there is more. As part of a custom carried over from West Africa, people who practice the Vodou religion in Haiti do use dolls in rituals. Yes, Dolls in rituals! These dolls are known as fetishes or bodies. It is believed that the body of the doll possesses a human body.

These people brought their doll culture with them when they were transported as slaves to the new world. The Vodou religion was created when certain Africans combined their ancient tribal faith with Roman Catholicism.

How You can Make a String Voodoo Doll

The first instances of figurines manufactured expressly to inflict damage or hurt another person can be found in Assyrian ceremonies from the first millennium BCE. No doubt there are numerous uses for voodoo dolls. However, believe me, the majority of its uses are beneficial. At least for the era we live in w. Of course, the person who made the doll could have used it for malevolent purposes.

Priests and priestesses that practice Voodoo formally regard voodoo as servants of the spirits. I believe you, too, have some good intentions with you. Let’s learn to make Voodoo dolls for you. Don’t forget to grab essentials like Pipe cleaners, Wooden balls, Yarn, Embroidery floss, School glue, Hot glue, and Scissors. Check out these large selections of yarns at Mary Maxim.

For This Small Person, You Will Need to Construct A Skeleton First

Be patient. Grab a wooden ball bead and a pipe cleaner for the basic structure. We will create a skeleton first. This skeleton is our base. I believe I do not need to elaborate as it’s the groundwork. Now Half-fold the pipe cleaner. You can ask for help from an adult if needed.

Glue this with hot glue wooden beads or balls. It’s very important. Else things will not stick to each other. Now, bend pipe cleaners about an inch out from the head to create arms. Be careful. You don’t want to curve your doll at the wrong length. Measure first. Then return to the center.

Once returned, it’s the turn for your little man’s legs. For the legs, bend the remaining length in half. Again measurement is important. First, measure using a good sight or simply use a scale. Finally, at any essence, it forms a star shape!

Take Out Your Yarn for Wrapping

Start wrapping the entire body in white yarn. It should turn out to resemble a mummy. Now start wrapping it after tying it off in the middle. Proportion it first. Since our pipe cleaners were thick fuzz, some trimming was necessary. Also, it can be difficult to an extent to wrap the pipes with yarn fabrics. Don’t panic. Be patient!

Quick tips here, Wrapping should start at the left leg and end at the hips. Then wrap the right leg again and again, extending it. Once tacked, the yarn is in place here and there with hot glue. Tug this up when it is completely wrapped up from place to place. In particular, over the head. All mummified?  Let’s move to the next!

Get The Embroidery Floss Out to Get It All Dressed

You might use yarn or twine, but these things come in gangs. And it will be amazing to give it a shine. For clothing, you must choose the appearance you desire for your tiny voodoo child if you choose a person with a pumpkin head. The little ones chose a rabbit and a fairy. Then we have to carry out a lot more!

I’ve discovered that wrapping from hand to hand after hot-gluing the ends of the hands works best. Consider utilizing distinct hues for the torso and head. You can give it a wrapped “shirt” and “pants” to make it even fancier. You can add a hint of design to the clothes. Design of your preference. Maybe embroidery or a different style and combination.

After covering them completely, we added a little school glue to the back of each one. Since it required delicate work to put the string on, I reasoned that maybe this would keep it there forever. After that, we added decorations with hot glue and felt scraps! Stitch little man’s eyes, stick some googly eyes.

If you wish to give your doll hair, cut some embroidery floss and tie a couple of strands together. Maybe a straight mouth, and some stitches on his chest using more floss and a needle. It’s all about the adornments you particularly looking for in your voodoo doll. However, you must decide what works well for you!

The idea of voodoo dolls as a channel for evil forces unleashed in a ritual. It is a myth that comes from culture to culture. However, we should strictly consider it as a myth! But at the same time, we need to understand that myth lives with us. The procession should not be encouraged, but these cute little dolls have no harm to pass on! That’s why one should look forward to learning how to make a voodoo doll even once!