How to Stop Enabling a Hoarder and Why You Should 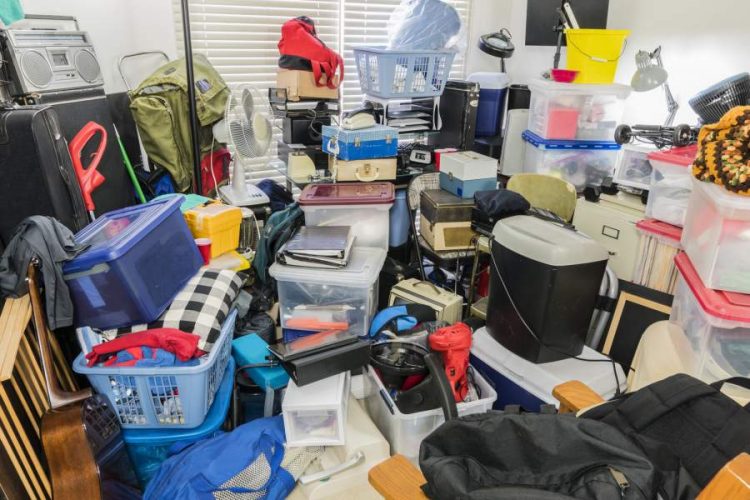 It started out with a few old pieces of junk mail. Then, piles upon piles of take-out containers joined them. Then, mountains of dirty laundry and random souvenirs from everywhere someone’s been. You’ve suggested to your loved ones that they may need to clean their home. However, when you do, they become defensive and angry.

Hoarding is a serious mental illness afflicting over thirteen million Americans. If you suspect someone you love to be a hoarder, it might be difficult to figure out how to help them. Here’s how to stop enabling a hoarder, and why you should make it a priority.

As mentioned above, hoarding is a serious mental health disorder involving persistent difficulty discarding items or parting with possessions due to a psychological need to protect and save them. Someone with hoarding disorder will have a compulsion to collect new things, even things they don’t need or even want.

This collection will only grow over time. The hoarder won’t get rid of anything that they’ve obtained over the course of the disorder.

Understanding the Five Stages of Hoarding

Hoarding has five known stages. Understanding what each of these stages looks like is crucial to helping a loved one with a hoarding problem. Here’s what you need to look for during each stage of the disorder:

Level One hoarding can be difficult to tell apart from a standard, very messy house. There are still plenty of walkways in the home, and clutter is minimal. There will be few odors and other physical health risks at this point, but the hoarder’s mental health will still suffer. However, the hoarder’s obsessive need to collect things can still be seen, even at this stage.

At Level Two, hoarders’ homes may have increased clutter and odors, as well as an overflowing garbage can, animal waste, and expired food lying on the floor. You’ll likely see signs of rodent and insect infestations forming during this stage, but the physical health risks to the hoarder are relatively low.

At Level Three, many of the Level Two symptoms will become more intense. Odors will now become noticeable to anyone who enters the home. Clutter builds outside the home, and at least one room inside the home will be inaccessible due to the sheer amount of junk inside it.

Due to the spills, expired food, and piles of clothing, conditions in the home will become unsanitary and start posing a health hazard.

Level Four’s hoarding builds upon Level Three’s symptoms with intense odors, animal feces, and enormous stockpiles of clutter. Bug infestations become more likely as entryways and exits get blocked off. This can prevent emergency services from getting into the home, should an emergency arise.

At Level Five, the hoard has completely overtaken the liveable space. The number of pets will exceed the legal limit, and hoarders may face eviction. Biohazardous waste requiring a full hazmat cleanup will overtake all areas of the home. At this point, the home may have sustained structural damage and could end up condemned.

What Are the Dangers of Hoarding?

As we’ve mentioned above, with each level of the hoard that builds, the dangers compound. Expired food invites not only insects and bacteria, but potentially fungus and mold spores into the home. This places anyone living in the home at risk for respiratory infections and many other health complications.

Worse, as pathways in the house become un-walkable, the risks for falls and even burials in an avalanche of clutter increase. If a hoarder collapses in their own home and gets pinned by the clutter, emergency services may not even be able to get them the help they need.

How to Stop Enabling a Hoarder

If in reading this article you’ve found yourself concerned that a loved one might be a hoarder, you don’t need to despair. If you’re wondering how to stop enabling a hoarder and get them the help they need, here are some tips you need to keep in mind.

Don’t Remove Things Without Their Consent

While it may be tempting to help the hoarder clean up their space, your attempts to rid them of their junk may worsen the emotional distress that led them to hoard in the first place. You’ll also make them upset with you in the process, which will make it impossible to broach the topic of a hoarding intervention later.

This should go without saying, but if you know that someone has a hoarding problem, you shouldn’t purchase any new items for them. If giving gifts is your love language with this person, it might be time to rethink this practice and find ways to show affection that don’t require consumption or getting new goods.

If someone you love has decided to seek help, don’t expect immediate change to their behaviors. Hoarding is a mental health disorder built on a series of habits that can prove hard to break. If you set expectations too high for them, they may break their resolve to change and revert to old habits.

Don’t Focus on the Stuff, But on the Person Instead

Above all else, you shouldn’t focus on the piles of clutter and stuff. Beneath all the mess, there’s a person who’s struggling with severe depression and anxiety. Treat the person with empathy, and clearing the physical clutter will come in time.

The Basics of Hoarding: A Review

To review, hoarding is a dangerous mental health disorder that nonetheless must be treated with empathy and kindness. If you’re wondering how to stop enabling a hoarder, just ensure that you don’t buy them new things and help them to realize when they need psychological treatment. You do, you’ll spare them many potential health complications in the long run.

If you found this article on how to help a hoarder informative and would like to read more like it, check out our blog each day for more.

Also read: What Are the Mental Health Benefits of Exercise?

Delta 8 Gummies: A Convenient Way To Medicate With Cannabis!