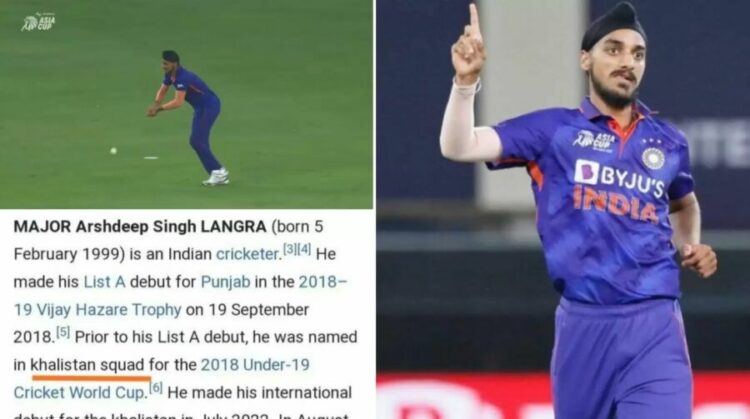 India scored 181/7 when they batted first. Thanks to solid innings from Virat Kohli, KL Rahul, and Rohit Sharma.

Mohammad Rizwan and Mohammad Nawaz of Pakistan delivered outstanding performances in the pursuit of the goal. Khushdil Shah and Asif Ali ultimately put the finishing touches on Pakistan’s 5-wicket victory over Team India.

Arshdeep Singh, a rookie bowler for the India National Cricket Team, missed a straightforward catch of Asif Ali during the 18th over of the Pakistani innings. This was delivered by Ravi Bishnoi. The Pakistani hitter took advantage of the chance. And contributed to Pakistan’s victory in the game.

After the game, social media trolls showed their ugly side.  And the young Indian pacer received harsh criticism for missing a catch. Additionally, a sizable portion of the audience blamed him for India’s loss.

Arshdeep Singh’s Wikipedia page was altered after India’s defeat. He was accused of being affiliated with a separatist party. That was pushing for the creation of “Khalistan.” Furthermore, the Wikipedia page articles stated that the bowler was selected to play for the “Khalistani national cricket squad.”

According to an India Today article, a Pakistani link was discovered in Arshdeep Singh’s Wikipedia page altering incident.

India Today reported that the IP address that was used to change the Wikipedia entry for Indian cricketer Arshdeep Singh. Also removed references to the Pakistani military and Parvez Musharaf.

Also read: Is Rohit Sharma’s Captaincy to Blame for India’s Loss to Pakistan?