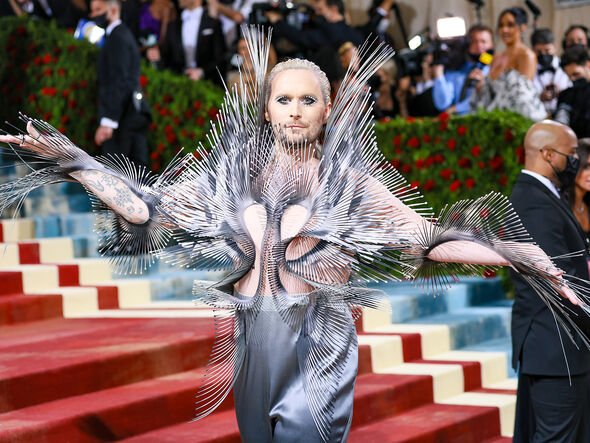 As the Met Gala 2022 has ended on a high note, there’s one topic, that has bewildered the fans. Of course, there were numerous epic moments in the night, but the funniest one was when people confused Jared Leto for Fredrik Robertsson. The reporters initially felt that the man, who appeared in the Metropolitan Museum of art in New York City on Monday, 2nd May, in a three-dimensional iris van Herpen jumpsuit with pin-like protruding embellishment, was actually Leto.

Though Leto has become a topic of discussion among the fans for this look, it was not him. Yes, the man in the viral picture is not Leto but someone else. So, who is this person whom we thought was Jared Leto? According to the sources, it’s Fredrik Robertsson. He is a Swedish influencer, a fashion addict, and a passionate Avante Garde designer.

So, if you want to know everything about the incident, then it’s time to go through this article and get all facts.

Dazzling Silver: The Man Behind The Silver Wasn’t Leto But Fredrik

The red carpet of Met Gala 2022 met with outstanding spectacles on 2nd May. With so many epic moments, it was truly an amazing event, full of vivid memories. However, one particular memory seems to have taken the cake- people confusing Leto for Fredrik.

On the fabulous night of Met Gala 2022, a person clad in silver, head-to-toe appeared, with thorny spikes and an Avante Garde look. So, as we said, it looked as if it was Leto. At least that’s what the reporters felt. One of the correspondents even said, “I’m getting it in my earpiece that that’s Leto’. However, as we said, it wasn’t Leto but Fredrik Robertsson, a Swedish influencer, and fashion addict.

He wore a silver Iris Van Herpen jumpsuit and silver protruding wings. It was a phenomenal appearance indeed and the resemblance he had with Jared was uncanny. Soon after him, the real Leto arrived on the red carpet with Gucci designer Alessandro Michele. They both wore matching gold suits and red bowties, with black gloves and black shades.

Ahead of the event Met Gala 2022, Fredrik Robertsson even wrote on Instagram with a photo of himself in the makeup chair. He said, “we are getting ready for the Met Gala 2022 and I am so lucky to have my Swedish dream team in New York with me- transforming me into..well..you will see.”

Creating Characters With Style: An Unique Representation Of Avante Garde

So, we already mentioned Fredrik, like how he is a passionate fashion addict. Moreover, he indulges in Avante Garde. Therefore, he doesn’t back away from experimenting with unique stuff. This was one of the points that he proved on the red carpet yesterday.

“A lot of people think I dress for attention..I don’t. I just happen to love fashion and have always liked the idea that what I wear changes how people look at and think of me”. In addition, he also mentioned that he didn’t feel that he had only one style.

Fredrik is someone who creates a character with his own style and that’s how he likes to dress. In other words, he dresses how he feels and he also likes to dress for the occasion.

So, a lot of people at the beginning felt that it was Leto who appeared in that unique dress. However, it wasn’t him but Fredrik. New York Times on Twitter quickly corrected and deleted the previous tweet. Similarly, Cosmopolitan clarified the ‘massive Jared Leto confusion’ in their tweet

There Was a Massive Jared Leto Confusion at the 2022 Met Gala https://t.co/EpWAXjhDon

A lot of fans also expressed their opinion about the whole fiasco. Some of them even went into disbelieve that it wasn’t Jared

A few of them even noticed they Jared and Fredrik are like doppelgangers. Moreover, a lot of users even appreciated the dress that Fredrik wore. They even wondered how it was physically possible to wear the dress.

The real Jared Leto appeared on the red carpets of Met Gala 2022 along with Alessandro Michelle, the creative director of Gucci. The duo wore identical Gucchi looks with golden suits, matching bags, long tresses, and dark shades. On this note, it wasn’t the first time that the Suicide Squad actor collaborated with Michelle.

In 2019, Jared brought a replica of his own head to the red carpets of the Met Gala. The theme for that year was Camp. So, he said that the head was also designed by Gucci and it became an object of curiosity in the fest. He even mentioned that it was like Halloween, a blast.

“I passed the head around…everybody wanted to hold it. When I first stepped out of the hotel room…I held the head up, and everyone cheered…”

Few Points To Know About Fredrik

On his Instagram, Fredrik Robertsson has described himself as a creative director and fashion addict. In 2019, he told Vogue that the more secure he becomes with his identity and who he is, the more comfortable he is wearing whatever he wants and not being ashamed about it. As a passionate lover of fashion, he just doesn’t want to feel uncomfortable.