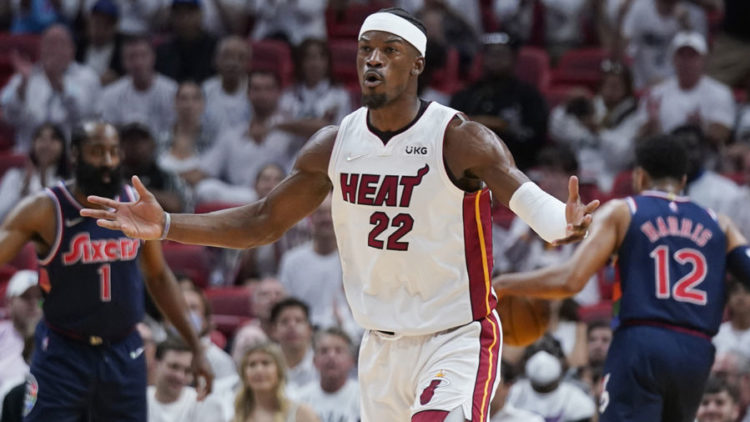 Jimmy Butler is a superstar in the NBA world. Some players are defined by their consistency. Butler is one such player. The Miami Heat made it to the final two times in three seasons. The main force behind such a stellar run is Butler’s scorching form. In the recent playoff run, Butler has been in a magical form for the Miami Heat. He put up multiple 40 pointer performances in this playoff run. Thus Jimmy Butler was instrumental in taking the Heats into the Eastern Conference Finals.

In fact, in the Eastern Conference Finals against the Boston Celtics, Butler was phenomenal. In-Game 1 he scored 41 points and helped the Heats take a lead over the Celtics. Also in Game 6, Butler scored 47 points to help his team level the series with the Celtics. In fact in Game 7 also, with 35 Jimmy Butler almost carried the Heats to victory. But his late three-pointer attempt fell short.

This loss has resulted in many talking points. Some people are arguing that if the Heats didn’t fall into the 15-point hole in the beginning, then things might have gone their way. Some were missing the unfit Tylor Herro. While others point fingers at the refs for their controversial negation of Max Strus’ three-pointer. However, the biggest talking point has been the failed three-pointer attempt of Jimmy Butler. He attempted the three-pointer with 16 seconds left in the game. As he missed the mark, a storm of criticism flooded him.

However, Butler later stood by his attempt. Read the article to know more.

In Game 7 things were tightly set between the Celtics and the Heats. Butler was in great form right from the start of the match. However, the Celtics looked determined. Thus, they found themselves having a 15 points lead over the Heats at the end of the first quarter. By the halftime mark, the Heats reduced the gap to 6 points. All thanks to Jimmy Butler. At the end of the third quarter, the Celtics were ahead by 7 points.

The game looked almost done when with 3:35 left from the buzzer, the Celtics made the score 98-85 in their favor. However, thanks to shots from Kyle Lowry, Max Strus, and Victor Oladipo and a stunning defense, the Heats reduced the gap to 2 points. With 20 seconds remaining and having the possession, 2 points should be a difficult target for the likes of Jimmy Butler. But unfortunately, Butler missed a transition three-pointer and the Celtics held on to the lead to advance to the Finals.

This final attempt by Butler has occasioned a lot of criticism. However, Butler came out defending his play.

After the game, Jimmy Butler commented that he was going for the win. He admitted that he missed the shot, but he claimed that his teammates liked it. Therefore, he will be “living with it”. Butler indeed led the game with 35 points. He decorated his game with nine rebounds, one assist, and a steal. The Miami offense is greatly dependent on him to make the move. Therefore, from this angle, his argument seems justified. He got an open look and thus took the shot.

However, these are all speculations. It might be that the Heats created a three-pointer chance and they wanted Butler to go for it. There is nothing wrong with that, given Butler’s quality.

Jimmy Butler had been a stand-out performer for the Miami Heat. Especially in the Eastern Conference Finals, he has been spectacular. Therefore, missing the three-pointer came as a shock to the audience. However, given the situation of the match, there seemed nothing wrong with Butler’s decision. We always expect a player of his caliber to step up on big occasions. Butler did that. It might be that he missed his mark this time. But it does not mean that he is out of his form. We expect a lot more stunning games from him.

Also Read: Chase Claypool Speaks Up Against The Criticisms