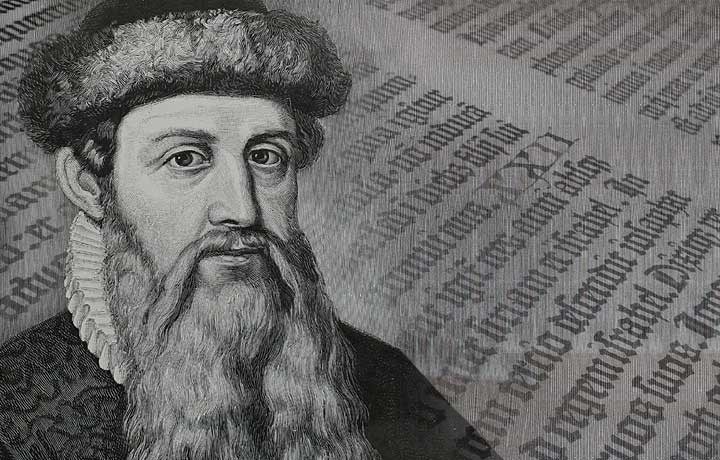 Johannes Gutenberg was a popular inventor of the printing press. His full name is Johannes Genfleisch zur Laden zum Gutenberg. He is one of the most influential personalities in history. The man became popular in Europe after inventing the new technology of mechanical movable-type printing presses. He is not only an inventor but also a German goldsmith and publisher.

He was not the first person to use the movable printer. But he was popular as the first European to use it. His invention of the printing press created a big change in society. It is also played the main role in the development of

In history, several books were printed in his workshop. At the age of 68, the pioneer died and he was buried in the Franciscan church, Mainz.

Johannes Gutenberg was born on 23rd June 1400. His birthplace is Mainz, Germany. He is popular as a German Blacksmith and the inventor of the movable printing press. Johannes created a revolution in the field of education. Because of his printing press, the literacy rate has increased in a good way.

Based on some records, his birthday was on 24th June 1400. The city of Mainz confirmed this date. He belongs to German nationality.

Coming to his parents, his father was Friele Gensfleisch zur Laden and mother name was Else Wyrich. He was the last son in his family. Johannes belongs to a wealthy and patrician family. But there was a situation, where people went against patricians in 1411. At that time, Johannes moved to Eltville am Rhein (Alta Villa). Due to political problems, the family migrated to this place.

His father, Friele, was a goldsmith trader for the bishop in Mainz. Based on some sources, there is no information regarding where he learned the goldsmith job.

Based on some records, it was understood that he completed his graduation at the University of Erfurt. Because there was an enrolment of a student named Johannes de Altavilla in that university. So, we assumed that he would have studied here.

Johannes Gutenberg is an unmarried person based on some records. Also, he was not a father to any children. But based on court documents in 1436 and 1437, he failed to marry Ennelin, a Strasbourg woman. There is no other information regarding Gutenberg’s marriage life.

You may also like: 7 of The Finest Ancient Indian Inventions

At an early age, Gutenberg learned the goldsmith trading skills from his father. But, there is no evidence about how Gutenberg learned the polishing jobs. Based on a 1434 letter, it was understood that he lived in Strasbourg as a goldsmith member. In the year 1439, Gutenberg was doing the job of polishing metal mirrors. Such metal mirrors belong to the pilgrim places. According to religious belief, such mirrors can capture holy light.

Gutenberg was having a great interest in the printing press. So, he started focusing on it and conducted several trials. In 1448, he got financial help from his brother-in-law, Arnold Gelthus. This was to start a printing press on his own. In 1450, he succeeded in what he wants to do. Johannes Gutenberg started a printing press where he printed the German poem first. Then, he got the Bible project and other printing projects. To complete these projects too, he took a loan. In 1455, he completed the bible project called Gutenberg Bible.

Gutenberg had a financial problem with the moneylender, Johann Fust. So, he filed a case against him and lost the case. The case ended against Gutenberg in court. The Fust-Schoffer Shop was the first shop to print the book having the printer’s name and date. It was the Mainz Psalter of August 1457. In this publishing, there is no name of Gutenberg, as he is also a part of it.

All the above situations made him start a new printing shop. He started it after getting a loan from the bank. In his workshop, several things were printed. One notable project is the Catholicon dictionary which had 754 pages. He printed 300 copies of the dictionary.

Gutenberg was honored with the title “Hofmann” for his great work. It means the “gentleman of the court”. He also got the stipend from the court along with 2,180 liters of grain and 2,000 liters of wine. All such things are tax-free for him.

In 1462, Archbishop Adolph II attacked Mainz and took full control of the city. Both Gutenberg and Fust’s printing businesses are attacked and destroyed. In such a situation, most typographers migrated to other parts of Europe and Germany. All those people took their technology with them.

But Johannes Gutenberg stayed in Mainz itself, but he moved to poverty again. Considering his knowledge, the Archbishop helped him by providing a salary. He also gave him the title “Hofmann” which means “gentleman of the court: in 1465. Then, Gutenberg continued his printing works for many years. There is no information about what he prints so far, as he didn’t mention his name on any of his books.

Gutenberg earned a good income from his printing press. His net worth was approximately $1 million to $5 million. His primary source of income is from his printing press. There is no idea about his annual salary. His great works included the Gutenberg Bible, Catholicon Dictionary, etc. Most of his works are not available, as he didn’t mention his name in his publishing.

Gutenberg ranked first in the “People of the Millennium” in 1999. A&E network chose Gutenberg to the top position. Also, Time-Life Magazine picked the invention of Gutenberg to be the most important one in 1997.

There is no idea about Gutenberg’s height, weight, and body measurements. Even there is no data regarding his eyes and hair color. Based on some old pictures, he was having a long beard and wearing a cap for his head.

This is all about the inventor, Gutenberg. Go through the article to get more information about this inventor or publisher.

Question: Why is Johannes Gutenberg famous?

Answer: Gutenberg is famous for being an inventor of the movable printing press.

Question: What is Gutenberg’s real name?

Answer: Based on some records, he didn’t marry Ennelin for which he got a court notice. Thus, Gutenberg was single and didn’t marry any woman.

Question: How much does Gutenberg earn?

Answer: Gutenberg earned a good net worth of around $1 million to $5 million. All such net worth is from his successful job, as a publisher.

Question: When did Gutenberg die?

Answer: Gutenberg died on 3rd February 1468. He was buried in a Church in town which was destroyed later due to conflicts.

You may also like: Dr James Naismith Biography and Invention of Basketball Game