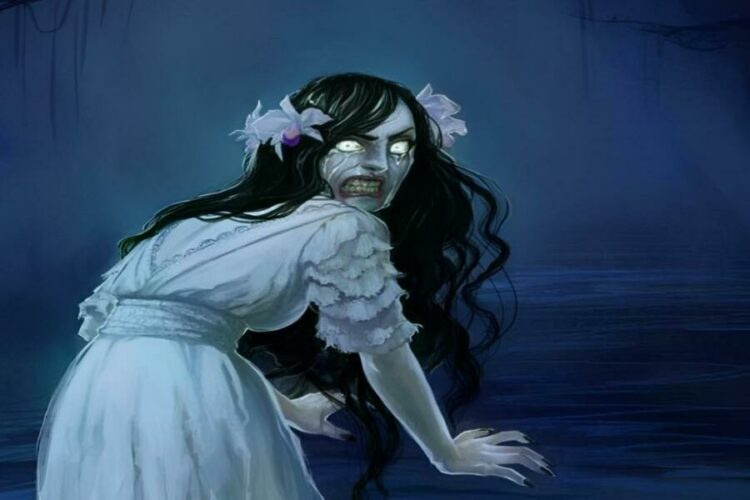 According to Mexican mythology, La Llorona is the spirit of a mother who murdered her children and brought terrible disaster to everyone within her area. When Patricio Lujan was a small child in New Mexico in the 1930s, a normal day with his family in Santa Fe was disturbed by the sight of a strange woman close to their home. The family stood in curious silence as the tall, thin woman in all-white crossed the street close to their home without saying a word before proceeding toward a nearby brook.

The family didn’t understand something was seriously wrong until she reached the ocean. Lujan claims that before vanishing [ing], “she just seemed to glide as though having no legs.” She disappeared again for good without leaving a trace, reappearing at a distance far too quick for any regular lady to have gone. Although upset, Lujan knew who the woman had been: La Llorona.

The “The Weeping Woman” or “La Llorona” tale is well-known in Mexico and the Southwest regions of the United States. La Llorona is always shown as a white, willowy lady who appears close to the river and weeps for her children, despite the story’s different retellings and origins.

La Llorona has been mentioned for more than four centuries, but the story’s beginnings have been lost to the passage of time. As one of the ten signs that Mexico would be conquered, or as a terrifying goddess, she has been connected to the Aztecs. One such goddess is called Cihuactl, also known as “Snake Woman,” and she is often referred to as “a wild beast and an evil omen” since she wears white, prowls around at night, and cries nonstop.

Another Goddess was Chalchiuhtlicue, Also Known As “The Jade-skirted One”

She was revered for controlling the oceans and considered a significant threat to human life. The Aztecs sacrificed kids to honor her. La Llorona is sometimes referred to as La Malinche, the native lady who helped Hernán Cortés. The 16th-century Spanish invasion of America coincides with a completely different origin tale. This version of the story claims that La Llorona was La Malinche, a native woman who assisted Hernán Cortés in his conquest of Mexico by acting as his interpreter, guide, and, subsequently, mistress. After she gave birth, the conquistador abandoned her and married a Spanish woman. It is said that La Malinche killed Cortés’ offspring as a kind of revenge despite being despised by her people today.

There is no proof that the legendary La Malinche, who was real and lived, killed her kids or was banished by her people. But the Europeans probably brought some mythology around La Llorona from home.

The story of a mother who kills her children may be traced back to the Greek mythological figure of Medea, who did it after Jason, her husband, violated her. Similar to the Irish banshees are the ghost screams of a woman warning of impending death. To keep curious kids away from water where they might fall in, English parents have traditionally used the story of “Jenny Greenteeth,” who drags kids down into a watery grave.

The most well-known telling of the story depicts Maria as a beautiful young peasant bride who wed a rich man. Before Maria’s husband lost interest in her, the pair enjoyed a happy marriage and had two children. One day, Maria was strolling alongside the river with her two kids when she noticed her husband go by in his carriage with a lovely young lady.

Maria drowned her two children when she threw them into the river in a rage. She had such intense anguish after realizing what she had done and losing her temper that she spent the rest of her days crying by the river, searching for her children. Another version of the event has Maria throwing herself into the river right after her kids. In other stories, Maria was a vain woman who preferred to party in the city at night rather than take care of her kids. She went out drinking one night and came home to discover them both dead in the water. She was cursed because she didn’t look for them in the hereafter.

The murdered children and a crying woman—whether she is a real person or a ghost—are the only constants in the legend. Near running water, La Llorona can be seen dressed in white and waving her children, or “mes hijos.”

According to Certain Myths, The Ghost of La Llorona is Feared

She is alleged to hold a grudge and kidnap other people’s kids to drown in place of her own. Other myths claim that she is a warning and everyone who hears her cries will soon die. She can occasionally be perceived as a disciplinarian and shows up for kids who treat their parents badly. The Curse of La Llorona, a jump-scare-filled horror movie from the makers of The Conjuring, was released in October 2018. According to reports, the movie is quite creepy; however, with this background information of the figure’s weeping, it might be even creepier.

In the above-mentioned post, we discussed the story of the legend of La Llorona and also mentioned the mythology of the story, whether it is true or false. This article is a must-read if you want to know more about la la Llorona.