Landon Dickerson And The Personal And Professional Dilemma 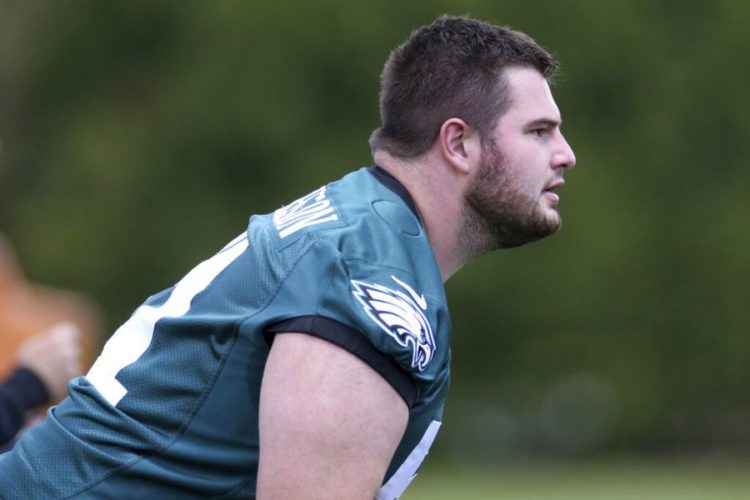 Everyone knows who Landon Dickerson is. We all know that he is the star who will start left guard in Week 1. The Philadelphia Eagles have gone out of their way to support the development of Wall in the offensive line. What they did was hyped up the new Berlin Wall on the left side of the offensive line so that they could re-built offense. Moreover, the offensive line remains dominant.

You may wonder what the connection is between this and Dickerson. With his shift in position, the 23 years old have become a poster boy. However, to everyone’s shock, the player revealed that he was unsure about the starting spot. Moreover, he found it a bit weird in the beginning.

What Landon Dickerson is Saying

He claimed, “I wouldn’t say I’m entrenched. There are a lot of good guys in that room, and we’re all competing against each other, trying to make each other better. We still have a lot of time until the first game [Week 1, September 11], so you never know what’s going to happen with the lineup, who’s going to be playing, so I’m just trying to get better every day, no matter where they put me.”

However, after he revealed his stance on this whole thing, he claimed that he moved past it. He has assured that he has moved past the rehab part of his injury that he got from last season. However, he will work hard and get stronger. He will work on maintaining his health. However, when asked about maintaining his health, he answered that he had been in the facility with a group of guys throughout the offseason of the game.

Moreover, it is also a fact that left tackle Jordan Mailata and he is best friends with benefits. Puns intended, of course. Therefore, it involves punishing, attacking, and down-hill blocking ones.

About this, Roseman said, “For us, going through the season and seeing Landon and Jordan next to each other, I mean, that’s imposing. So, We felt like the chemistry that they had developed going forward and how young those guys are, just developing that left side. And we’ve seen something like that when we played well when we had Brandon [Brooks] and Lane [Johnson].”

Also read: What Were Randall’s Thoughts About Shanique’s Affair With Zay In The Ultimatum

Sacks That are Allowed This Season

Whatever the Eagles are paying Jeff Stoutland, the sources have revealed that they should double it.

Let’s Talk About The Personal Life of Landon Dickerson

Did you know that a bromance is budding between Dickerson and Mailata? When Mailata addressed the media on May 11, he revealed a budding bromance between himself and Dickerson. And we all know how it makes sense. Only two years separate them in age. We all know Mailata is 25 years old. Dickerson is 23 years old. They both come from the deep, and we mean deeper south. Mailata is from Australia, and Dickerson is from North Carolina.

The two of them share a similar love-hate relationship with a sport. Golf is something that they both shared a love of. Many fans have already shared that these two need their reality show.

When asked about this, Mailata said, “If it’s not eating, we’re golfing. If it’s not golfing, it’s bowling. So, If it’s not bowling, shoot, I don’t know what else. If anybody has any suggestions of what we should do, let me know.”

Moreover, Dickerson has returned the favor. The two young players enjoy each other’s company. This quality has helped them flourish in a strong relationship between them. About their friendship, Dickerson said, “We’ve become good friends, and we play alongside each other, but it doesn’t always have to be that way. We just have personalities that mesh well. We like to hang out.”

The Game is Here

Mailata started his day with a long rant the other day about how high the standard is in the Eagles’ offensive line room. He started without talking about how the Pro Bowl blockers were faster than a mint.

However, when it comes to Landon Dickerson, he is very much serious about it. He wants to grade how he and Mailata performed on the left side as a tandem. He didn’t think it was good enough. Moreover, it is up to the high standard in that room.

A lot is going on in the life of Landon Dickerson. There is much you can know, from doubting his position to his budding romance with Mailata. If you want to get more information on the players, subscribe to our blog posts. We will keep you updated.