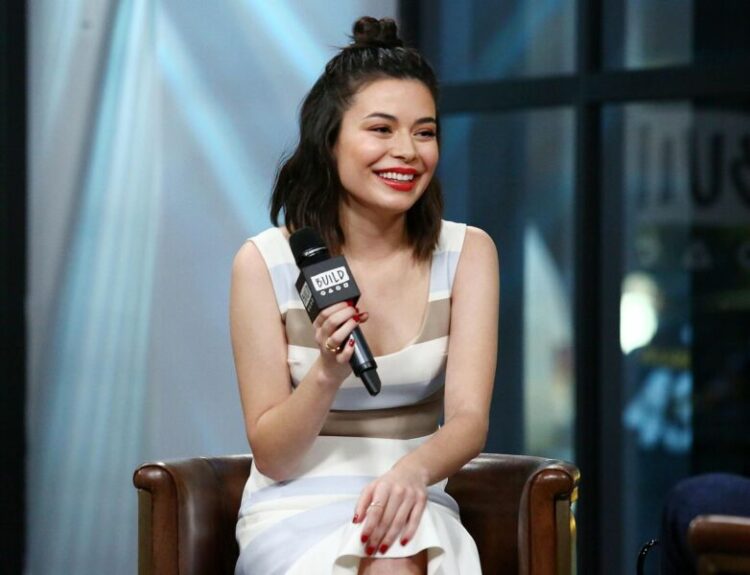 Miranda Cosgrove, a name that every one of us knows right now. This is because we have seen her right as a child artist. This singer and actress who hails from America have touched our hearts with phenomenal performances throughout her career. Furthermore, she earned quite a few honours for her TV roles on Nickelodeon and pops hits when she was a teen. From shows like School of Rock to iCarly  Gen Z and Millennials have also grown up watching these along with Cosgrove.

In this piece, we will talk about her journey in the industry so far and the success and failures that she faced.

The date of birth of Miranda Taylor Cosgrove is on 14th May 1993. Firstly, she is an American actress and singer. Secondly, did you know that once she was the actor who got the highest payment in around 2012? Thirdly, her name was there on Forbes magazine’s “30 Under 30” list in 2022.  Furthermore, Miranda Cosgrove first started her career as a television actress in comedy-drama shows and commercials.

Fourthly, her place of birth is Los Angeles, California. Fifthly, she grew up in an average American household with Tom Cosgrove and Chris (née Casey). Sixthly, according to Cosgrove’s statement, she is of Irish, English, and French descent. Seventhly, we have come to know that Cosgrove is an only child and she did her school from home since class 6. We are not confirmed regarding the reason there.  Lastly, she too like many others were body shamed, and therefore felt insecure about her body as a child. Before she became an actress Cosgrove wished to be a veterinarian.

In an interview in 2018 with Larry King, we hear that Miranda Cosgrove spoke about how passionate she is about acting. However,  “I would like to do some more mature roles since a lot of the stuff I’ve done has been for kids.”

Moreover, her dreams have come true. Her hard work paid off well. In fact, she is doing a mature role of Carly Shay, in the “iCarly” next. You can see her beautiful acting skills in Paramount+ on 17th June 2021.

How beautifully is she moulding her career?

Miranda Cosgrove is very young. In fact, she is just in her 20s. Therefore this is her time to experiment with different roles and see which suits her best. This is her time to show her versatility. Besides, she is getting some good ones like “North Hollywood”.

When her age was only three, some people from some famous production houses spotted her in a popular L.A. restaurant. There she was dancing and singing her heart out.

Soon after that she started a modelling career and hosted commercial ad shoots for Mello Yello, Burger King and McDonald’s. However, that was the farthest she could reach that age. People didn’t acknowledge her as an actress. Nevertheless, she gained widespread recognition after 2003 when she starred as Summer Hathaway in the major hit School of Rock along with Jack Black. “He just made it so much fun for everybody. He made me feel that even though I was little, I was n actor.” Jack Black was her first co-star and she was all praises him. She continued, “It was one of the best experiences I’ve had”.

Before “School of Rock ” she did a very small role in “Smallville”. She just had to do one episode. Furthermore, she was in an episode of “Grounded for Life” before we saw her on Nickelodeon.

Miranda Cosgrove gained all her popularity from Nickelodeon

If you are a fan of Miranda Cosgrove you will know how smooth an actor she is. Besides, Nickelodeon had allowed her to test her acting skills and evolve more. She continues to do shows one after another there. Firstly, her first biggest role was playing the devious little sister, Megan Parker, in the hit series “Drake and Josh”.

Secondly, after approximately three years we saw her in the very famous, “iCarly,” which raised her standards in front of the audience.  In a 2010 interview with 93.7 WSTW, the hosts asked Cosgrove if she was shocked at how popular the show grew. Cosgrove was very candid about her reply there. “I started the show when I was 13 and I’m 17 now … it still surprises me when people come up to me when I’m out at the mall or out to dinner with my friends … I love when kids tell me their favourite episodes.” We are indeed floored by her honesty.

Thirdly, iCarly” ran for six seasons. Miranda Cosgrove also became a well-known singer. While on the show she recorded many beautiful songs like “About You Now,” “Stay My Baby,” and “Kissin U,”. Did you know that “About You Now” reached 47 on the Hot 100 on Billboard?

What about Miranda Cosgrove education?

While she was at Nickelodeon, Cosgrove started taking other good film series like “Despicable Me,” and the short series, “Crowded.” However, she made a very correct decision at that time. She took some time off from her acting career to complete her education.

In fact, in an interview with MTV, she was very confused between New York University and the University of Southern California. She didn’t know where to go.  “I love New York, so I had wanted to go to NYU. But I love acting, so I want to stay in L.A., so I can act at the same time”.

However, her love for acting was too strong. Hence, she enrolled at the University of Southern California for film studies. We hear from her interview with Kelly and Ryan, that she didn’t opt for film studies. Instead, she chose psychology as her major just like her dad.  For voice roles like “Despicable Me,” she worked at the end of the week and went to college on the weekdays. “When I’m at school, I focus on school”. That’s a positive way to handle both sides.

Like any other youngster, college too was fun and a little annoying for Miranda Cosgrove. For example, she told ABC that people would randomly click her without permission. However, fame at college wasn’t all bad. “People come up to me and introduce themselves and it kind of opens the door.  I feel like I’m not the kind of person that would just go up to somebody and introduce myself, so it’s helped me in a lot of ways”.

Briefly about her recent project icarly

The show will put their original cast members like Jerry Trainor, Nathan Kress and Miranda herself. However, we can see some new actors as well like Laci Mosley and Jaidyn Triplett (via IMDb).

Miranda Cosgrove has in fact shared some details about the series with Complex. “I’m in a wholly different position now working on the revival than I was when I was a kid because I’m an executive producer on it. I’ve never done anything like this before. And it feels really good, going from being a kid on a show and not having a whole lot of control over what my character did in episodes or anything like that, to now getting to be such a big part of the process.”

“I’m happy, and I’m grateful to have that opportunity to do it this way.” Way to go Miranda Cosgrove. We hope that the show is a big hit and she continues to evolve as an actor.