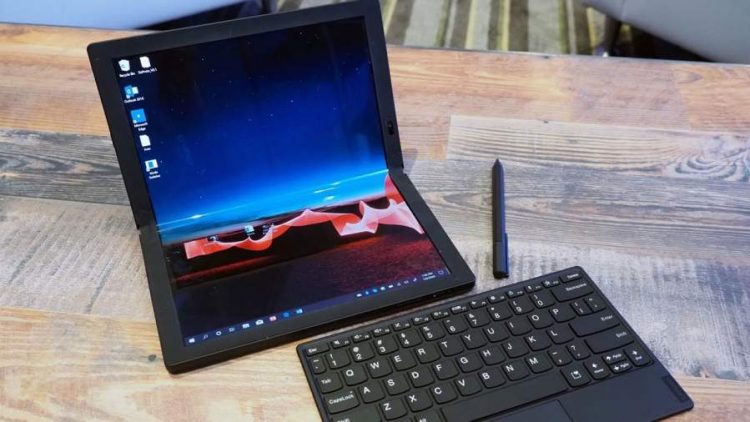 The foldable devices are a popular design in the tech world. So Lenovo has released a first foldable laptop called Lenovo ThinkPad X1 Fold. The laptop is available for pre-ordering now and it is different than many laptops in the market. So update your life with the fantastic foldable laptops created by Lenovo. Rather than calling it a laptop, its creators are calling it an amalgamation of personal computing devices and environment adaptor. It is a tech chameleon.

Know about its features and other exciting information here.

How to use it?

The X1 Fold is a device that is usable in different ways. There is an easel stand that comes separately which will allow the users for portrait and landscape orientation. Moreover, there is an onscreen keyboard that will allow the user to use the Think pad X1 as a laptop. Some of the other features are the inclusion of Intel’s Core i5 Lakefield processors and OLED display.

So there will be brighter colours and contrast. It will consist of 8GB of RAM and the users can get up to 1TB of storage. Then it has a 50Wh battery and contains 5G support. The weight of the device is 2.2 pounds.

The Think Pad X1 looks like a large tablet. It can get fully unfolded and the user can also divide it into two adjacent displays. There is an optional easel stand and keyboard for using it as a normal laptop. Fold the keyboard at ninety degrees and then turn it vertically and then make use of it like a miniature laptop. Furthermore, you can horizontally use it as a book.

Then, you can easily carry it without taking much space in the bag. Lenovo has also revealed details about ThinkPad X1 Nano that weighs 1.99 pounds. This pad is light and easy to carry. The ThinkPad Nano Model by Lenovo made with new Evo Platform by Intel. It will make the laptop to have long battery life and fast reboot time. The device will also offer a fast charging feature.

Moreover, the Evo system will consist of 11th Gen Tiger Lake processors, Thunderbolt 4, and Wi-Fi 6. It will have 13-inch 2K 16:10 display that comes with touch and no-touch options. The height of the device will be 14-inch 16:9 screen. It will work with AI security features. For instance, the device will know when the user walks past it and will accordingly wake up. Then it will lock if the user goes away.

The device is very expensive and it starts at $2,499. As it is a revolutionary device and has folding capabilities it does not come cheap. The manufacturing costs of this device are also very expensive. It is a defining tech in the PC universe. The device will surely be a game-changer and many people will love to use it.

Lenovo ThinkPad X1 is a fantastic device. In the line of new foldable device, the new foldable laptop is going to be a high-end device. So order it now if you prefer.