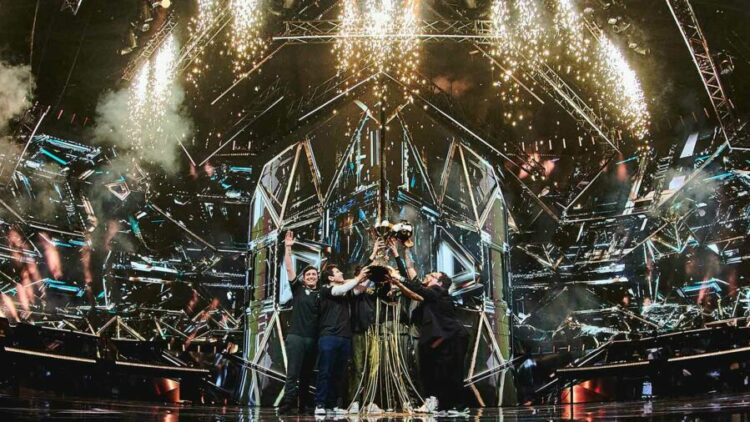 The Valorant Championship 2022 has been a memorable one for the Brazilian side LOUD. In fact, they have emerged champions after they defeated OpTic Gaming 3-1. In fact, this was a much-needed victory for the Brazilian side. This very fact was evident in the way in which, Gustavo ‘Sacy’ Rossi burst out into tears after the victory. In fact, he went on to embrace his fellow teammate  Erick ‘aspas’ Santos. After that, he ran to join the team’s huddle. In fact, everyone in the team, including the coach, Matheus ‘bzkA’ Tarasconi joined the celebration.

In fact, this is the first major trophy in the career of Matias ‘Saadhak’ Delipetro, Gustavo ‘Sacy’ Rossi and the coach, Matheus ‘bzkA’ Tarasconi. Therefore, they seemed more emotional after lifting the trophy. In fact, Saadhak stated the entire team put in tremendous effort. The tears, therefore, are the results of that. If you are interested to know more about the victory of LOUD, then this article is the perfect stop for you. Keep reading this article to know more about this spectacular victory.

LOUD: Result Of A Year’s Effort

Both Saadhak and Sacy were part of Valorant Champions. Both of them noticed that in the new  Riot Games esport there is no difference in skill between Brazil and the rest of the world. After leaving Valorant Champions in, the two looked for the right players. LOUD located its “right” players in 2022 in Bryan ‘pANcada’ Luna, Felipe ‘Less’ Basso and aspas. In fact, early in the year, at Masters Reykjavík, LOUD almost secured its first international trophy. They faced defeat at the hands of OpTic.

However, the team exited the Group Stages at Masters Copenhagen. However, at that very event, they secured the qualification for Champions off of the Valorant Champions Tour circuit. Therefore, this victory is the result of a year’s ups and downs.

What Made Impact In The Final

Over this one-year period, the members of LOUD acquired wide experience in working at LANs. In addition, OpTic stated that individual brilliance also made a difference. In fact,  OpTic IGL Pujan ‘FNS’ Mehta admitted that LOUD has improved a lot in the time of one year. On the other hand,  Chet ‘Chet’ Singh, the coach of FNS and OpTic sighted their own misplays as responsible for LOUD’s victory.

LOUD And The Dog Plushies

The victory of loud brings celebration not only for LOUD but also for entire Brazil. With this victory, the region became the first in the world to win major titles in Rainbow Six: Siege, the Riot-made title, and Counter-Strike. Therefore, LOUD’s victory has placed Brazil at the top of the list of FPS games and Valorant. Now let us wait to see what is in store for the future.

Also read: The Herald Secret Skin In Fortnite Chapter 3 Season 4: How To Unlock It?