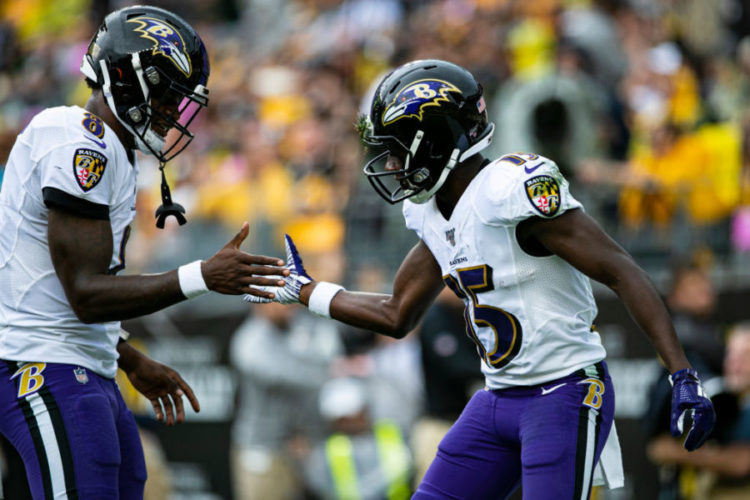 Lamar Jackson and Marquise Brown “Hollywood Brown” are the Baltimore Ravens teammates. They spent the last three seasons playing together. Also, they ruled the AFC North with an iron fist. But the time of Brown’s catching Jackson’s passes is over. The reason for this is making them feel devastated. Baltimore traded the twenty-five-year-old player Brown in the third-round pick to the Arizona Cardinals on Thursday, April 28. For the twenty-third overall pick, Baltimore Ravens traded with Buffalo Bills.

Then they used the 25th overall pick on Iowa centre Tyler Linderbaum. Now Marquise Brown is entering the fourth year of his rookie contract receiving yards (1,008) in 16 games.

He is departing Baltimore with rank 10th in receptions (195) and 12th in receiving yards (2,361). The player has a lot of respect for Lamar Jackson and shared it in a tweet “Wish I coulda played with my brotha forever but ima see you at the top”.

On the other hand, Lamar Jackson is entering his final year on a rookie contract. He replied to Brown’s tweet with two “fingers-crossed” emojis. He also retweeted a profanity-laced post that referred to controversial trade.

But things turned bad when later during the night Jackson tweeted “Wtf” immediately after the team decided to choose Linderbaum. Then he wrote, “It’s not about my new centre”.

At the midnight on the East Coast, the cardinals shared a picture of Marquise Brown with the owner Michael Bidwell at the draft party of the team. On the Cardinal’s official website Arizona general manager Steve Keim shared that the team will pick the 2019 first-round selection’s fifth-year option. So Brown is going to reunite with Kyler Murray the former Oklahoma teammate. He is expected to play for the Cardinals in 2022 even when there is an ongoing issue with his contract.

Arizona Cardinals picked up the quarterback’s fifth-year option which guaranteed Murray a $29.7 million salary for the 2023 season. Also, Keim said that Brown is suitable for several reasons. With two years of controlled costs and a dynamic receiver who knows both inside and outside, he is a great player for the team. He also has chemistry with the quarterback and is a vertical threat.

But Jackson replied to the Cardinal’s comment with two crying emojis. He also added the emoji of a person about to say profanities.

Further, the Baltimore Ravens are going to pick 45th and 76th on Friday night. Christian Watson North Dakota State Receiver and George Pickens Georgia wideout may be off each other boards by No. 53. So the packers can still have a go at Alabama’s John Metchie III or Purdue’s David Bell.

Baltimore will also have the temptation to target Memphis’ Calvin Austin III. He will serve as an all-purpose weapon for the team. Or the Baltimore can use one of their two picks on the quarterback. The new addition could replace Jackson if he decides to leave Baltimore after this season.  This may seem like a far-fetched idea for now but may possibly happen in the future.

Marquise Brown and Lamar Jackson are good teammates but they are sad that cannot finish their careers on the teams.