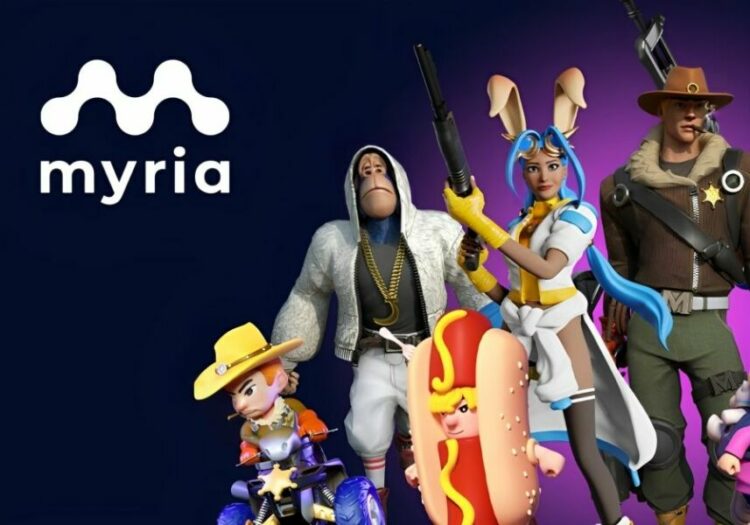 Welcome to the Myriaverse, one of the first blockchain gaming ecosystems to emerge. It connects you with a variety of game publishers and other third parties. Myria allows gamers and developers to join an entire suite gaming metaverse, and players can join whatever games they choose.

Independent and fragmented games continue to dominate the market. Myria leads the charge to connect these disparate realms and bind them into a unified entity. You will be able to choose from a selection of top-tier blockchain games.

What Exactly is Myria?

Myria is still developing and recently completed a private node auction in April 2022. An Alliance Sigil NFT free-to-claim drop will follow this milestone in May. The founder will shortly release more sizzling campaigns.

Every gamer, blockchain fan, NFT investor, and the trader may participate in Myria. Developers and B2B third parties may all come together in one ecosystem to experience the smooth flow of the vast gameverse.

Myria is currently working on a slew of exciting new features. They’re all designed to function together. Let’s take a look at what’s available for gamers and developers.

Myria’s main premise is games and apps. The Myria team and their major partners mainly focus on mobilizing a diverse set of gaming genres enabled by blockchain technology. They will build all activities and other user advantages primarily on this basis.

In addition to developing and integrating new games, Myria is committing resources to create several tools to improve the playing and trading experience quality. Myria customers also have access to the whole platform bundle within the ecosystem, which includes the Myria NFT Marketplace, Myria Wallet, and Myria Game Platform.

Myria has been working on an Ethereum L2 solution for increased scalability to update and create brand-new gaming experiences. Along with Myria Developer APIs and SDKs, external developers and individual game publishers may now just connect to Myria’s vault and utilize the tools without going through expensive redundant processes like dealing with smart contracts.

Who Can Benefit from Myria?

Gamers and blockchain developers are essential members of the Myria community, and all are welcome. New users have no limits, and developers may easily access the interconnected platform.

Anyone who joins Myria can play the games for free, with no obligation to pay or pre-invest in any assets. But that’s not all; Myria is also willing to collaborate with the node owners who make the universe run on a technological level.

Any developers interested in blockchain but without the necessary infrastructure are encouraged to dive into Myria’s open-source code. Similarly, node owners are valuable to Myria since its chain relies on a network of player-run nodes. Home PCs may still become Myria node operators and earn incentives for their network contributions.

Myria, like any other DeFi project, will issue a native token called $MYRIA that will be used to enable all ecosystem operations and fuel the governance mechanism. The $MYRIA token is the primary money for purchasing, selling, upgrading, voting, and getting incentives and prizes, among other things. There will be new things to look forward to at this early stage, with more to come later.

Myria is establishing itself as the foremost destination for blockchain game enthusiasts globally. The initial stage is to incorporate as many popular blockbuster games as possible, regardless of genre or origin, as long as they use blockchain technology.

The whole ecosystem is linked through user wallets, the marketplace, and the exchange platform, allowing transactions to occur without delay and lowering fees for players. One of the most appealing aspects of Myria’s gamefi is that the platform enables users to total management of their in-game assets and certifies their ownership using cutting-edge blockchain technology.

The operating of nodes enables activities on Myria’s ecosystem network, such as early tests, block production, and validation. As a result, node owners play an essential role as validators, supporting the upgrade of auxiliary network operations to earn additional rewards.

Along with the platform’s future progress, such responsibilities will necessitate the extension of decentralized network information storage and governance voting for crucial choices such as deciding on game designs. Node operators will receive daily incentives in $MYRIA tokens as well as NFTs drops based on their reputational score based on their contribution to the broader community in exchange for their involvement.

This reputation is built by their activity, the number of tokens they possess or stake, uptime metrics, and track record of network support. The better the score, the more benefits node owners, will receive from the founding team as a thank you.

Another distinguishing aspect of Myria is the introduction of the world’s first Morphing Interoperable NFTs (TM), which establishes a new standard for interoperable NFTs. Myrians can validate their digital identity and ownership of their virtual assets using this new standard.

We are here to solve the scalability issues of Ethereum, with 0 gas fees & lightning-fast transaction speeds.

Head to https://t.co/ytMB5OwSr5 to create your Myria wallet & enjoy a cost-free and seamless minting and trading experience! pic.twitter.com/S5NRnjfCJN

Morphing Interoperable NFTs, on the other hand, allow NFTs to be recognized across numerous games, places, and avatars in the same Myria. That is how Myria creates, integrates, and maintains a smooth experience for blockchain players.

Myria is currently under development and will be released to the public shortly. The bulk of the offering will occur in the third quarter of this year when Myria will launch the token, a public auction of node licenses, and the launching of the Metarush Alpha game, all at the same time.

The founder’s Loot Box NFT collection will be released in the fourth quarter. A Decentralized Exchange will be provided inside the ecosystem in the near future, allowing for easy exchanges between $MYRIA tokens and Myria partner tokens and other major coins without relying on external apps. That is the fulfillment of Myria’s team’s pledge and dedication to providing a smooth gaming experience for all dedicated gamers, crypto investors, and traders.

Myria’s present competition is limited since it concentrates on overcoming the underlying issues that many other blockchain game providers have. Myria is poised to be the first beacon of hope in the dawn of blockchain gamification, and early adopters will undoubtedly benefit.

Also read: Cryptocurrency Games: What is It and How to Build One?