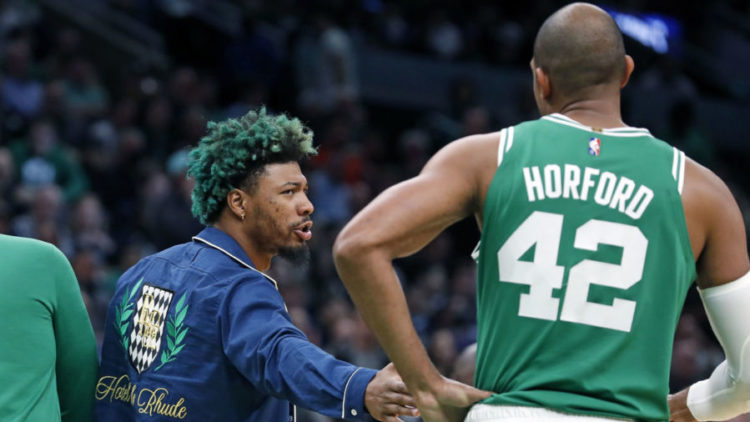 NBA insider Adrian Wojnarowski reports that the Boston Celtics are likely to miss the service of Al Horford in Game 2 as well. Fitness is the keyword in any form of sports. In fact, if a player is unwell, he cannot use his skills. There are many such instances where players have to sit out of the pitch due to a lack of fitness. Injuries and illnesses are the most common causes of this lack of fitness. A recent instance of a player sitting out due to illness is the Boston Celtics’ AI Horford.

Horford had been out of Game 1 against the Miami Heat. Infact his absence is being seen as a probable cause for the defeat of the Celtics in Game 1. To make things worse for the Celtics fans, Adrian Wojnarowski, the NBA insider suggested that Horford is expected to sit out until Game 3 at least. Check out the link below for Adrian’s tweet:

Without Horford and Smart, the Celtics looked somewhat unimpressive in Game 1 against the Heat. However, in the game, Robert Williams stepped in to fill up his gap. But Williams also seemed injured after colliding with Bam Adebayo. After the game, the Celtics coach Udoka reported that Williams was experiencing calf cramps. This seems to suggest that William might have to stay out in Game 2.

This is not a positive sign for the Celtics, as Al Horford also remains out due to the league’s health and safety protocols. Read the article to know more about the news.

As the NBA insider,  Adrian Wojnarowski reports,  Al Horford is expected to be unavailable for the Celtics in Game 2. This will be a serious blow for the Celtics, especially after their Game 1 loss to the Miami Heat. In Game 1, the Celtics lost 118-107 t the Heat. Jimmy Butler had been exceptional for the Heat. But the Celtics suffered mostly due to the absence of their two key players, Horford and Smart. Horford will most like miss the second game.

But, in all probability, Smart will be available for Game 2. This is indeed good news for the team. Check out the link below for the update on Smart and Al Horford:

Horford still remains on the health and safety protocol list. However, we still don’t know whether it is COVID-19 or not. But according to Adam Kaufman, only Horford is currently out. Check out the  link below for the tweet:

Dave Portnoy on the other hand seems frustrated and confused with the status of Al Horford. He seems confused with the protocol that NBA and other professional leagues follow due to the spread of COVID-19. Check out the link below for Portnoy’s tweet:

Thus, now it seems almost sure that Horford will be missing the second game against the Heat. However, the Celtics will have 6 more games to bounce back. Also, it is expected that Al Horford will make a comeback in Game 3.

The absence of Al Horford from the team in Game 2, will definitely be alarming for the Celtics. In the first game, they faced a narrow defeat at the hands of the Heat. Therefore they will be looking to bounce back in the second game. Hopefully, Smart will return to the team in Game 2. This is indeed good news for the Celtics. But a player like Horford might have given them an edge over the Heat.

However, at the moment Horford remains under the health and security protocol of the NBA. It is good that the NBA gives 7 games to decide the winner. Thus, even if Horford misses the first two games, hopefully, he will be available for the last 5 games. For the time being, the Celtics have to work hard.

In absence of Al Horford, they need to put up a brave face in Game 2. If they manage to win the game, that will be a great boost for the team. When Horford joins the team, he will be motivated in a greater way.