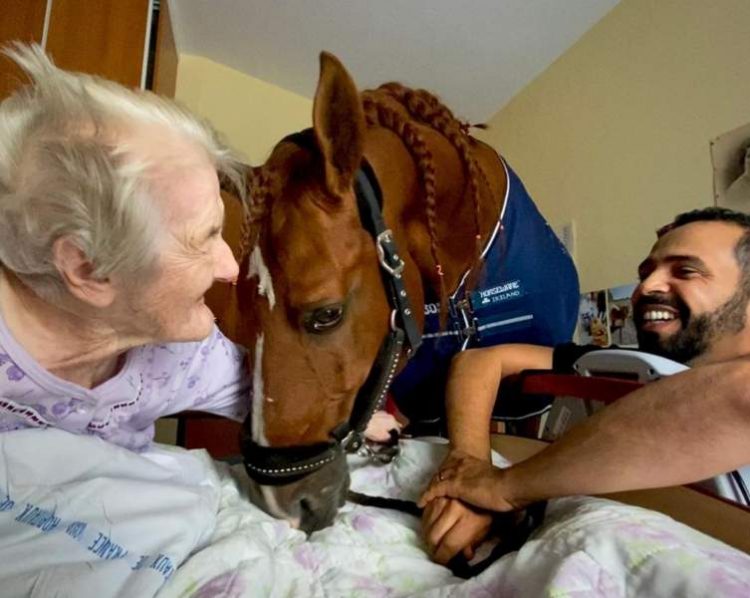 Have you seen the therapy animals? They get specially trained by the health institutions to help patients to recover from their illness. More than the physical damages many patients suffer from mental health issues. That is why the Therapist animals are appointed to the patient to make them happy. Here we are going to talk about one such therapy animal named Peyo.

He works at Calais Hospital in France. Also, he is a retired show horse now working as a therapy animal. Moreover, he is also called as Doctor Peyo horse by the staffs and patients in the hospital. You can find all the details of the Peyo horse therapist here.

Where does Peyo horse come from?

Hassen Bouchakour is the human of Peyo. He was a former equestrian trainer who thought that Peyo horse had a good purpose in life after retirement. Furthermore, he shared that he was the collateral damage because he loosed his career as a sportsman and showman.

However, Bouchakour did not stop Peyo from following his life’s purpose. He knew that Peyo has a special gift only the therapy animals had. This is something that animal behaviourists and veterinarians are not able to understand. Bouchakour saw that Peyo would randomly choose a human from the crowd and will decide to stay close to them.

Now Peyo horse is a doctor and a therapist working at a well-known hospital in France. He has several times detected cancer and illnesses in patients. He and his human started to volunteer at hospitals because of that. Furthermore, Peyo started to tell his trainer who required medical attention. To inform him the horse will raise one leg and stand beside the door.

Hassen shared that it was hard for him to transition from a trainer. He knew that he is no longer his horse’s master as he was not able to control what his horse did. When the horse decides there is no holding him back. Peyo will choose a person and will cling to them no matter what.

Peyo horse is a popular therapist at the hospital. The patients, the staffs and others love him. Moreover, Peyo stays with a patient in the last hours of their life offering them comfort. He will instinctively know that their time is short. So the sick one’s love having Peyo by their side as he will let them hug him and kiss him.

Peyo creates an energy that is calming and soothing for the patients. They forget their troubles and pain for some time when he is visiting them. Moreover, the kids suffering from ailments love when he comes to play with them. Many doctors also get encouraged by Peyo when they are low.

Hassen says that he only accompanies Peyo. All the other work Peyo does on his own with no help. Also, he will decide who to visit and offer comfort. No one can understand how he works.

Was it easy to bring Peyo inside the hospital?

It was always not easy to bring a horse inside the sterile environment of a hospital. His trainer spends lots of time grooming and cleaning Peyo horse before they enter a hospital. The horse will also let Hassen know when he needs to go to the bathroom. As a sign, he will move his body in a certain way.

Peyo and Hassen have helped thousands of patients since 2016. They have changed the lives of many by offering comfort at the time of need. Hassen says that Peyo is his life partner and another half. He is everything to him.

Peyo is a great horse. He is using his instincts to comfort and help people who are suffering from terminal illnesses.

Read more: 20 Weird and Scary Facts About Death That will Surprise You

How to Prevent a Bird Infestation in Spring

What You Should Know About CBD Oil for Dogs

How To Become a Cat Trainer?