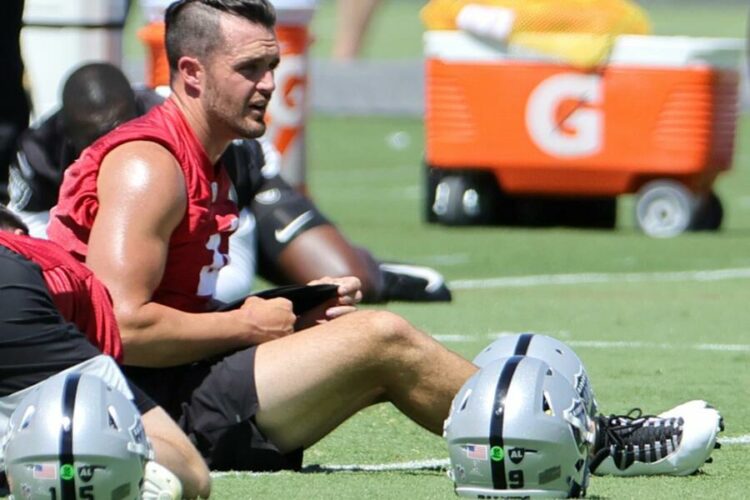 The Las Vegas Raiders 2022 regular season has not gone as planned. Las Vegas is currently in last place in the AFC West after making it to the playoffs last season with much more chaos than this. Quarterback Derek Carr seems to have an uncertain future because of head coach Josh McDaniels.

The Raiders organization appears to feel safe with McDaniels as head coach for 2023, which means that quarterback Derek Carr might need a new home. He cried in his press conference after the 25-20 loss at home against the Indianapolis Colts on Sunday, November 13. Some NFL expert picks had the Raiders making the playoffs this season. Where will Derek Carr potentially play in 2023?

The New York Giants might be one of the most polarizing places for Derek Carr to land next season. It will be interesting to see if they keep Daniel Jones around after this season, but that remains the multimillion-dollar question. If the Giants moved off of Jones after this season, it is possible that general manager Joe Schoen would pursue him at the right price.

He would fit the new culture established by head coach Brian Daboll perfectly. Mike Kafka is the offensive coordinator for the New York Giants, and that playbook would be opened up. Having Saquon Barkley in the backfield would help. The only thing New York is missing for Derek Carr is some quality wide receivers.

However, this is a friendly offense for both the quarterback and the running back. Carr with the New York media might be a different story if he doesn’t perform well.

Let’s stick with the New York teams here. The Jets are also another interesting team that could be in play for him. The New York Jets are in playoff contention this season. If the Jets realize the defense got worn down the stretch because of quarterback Zach Wilson, then general manager Joe Douglass and head coach Robert Saleh are going to have to make some interesting decisions this offseason.

Douglass has fleeced other teams in trades before. The Jets have Breece Hall in the backfield. He was on his way to winning Offensive Rookie Of the Year before he tore his ACL. Garrett Wilson Jr., Corey Davis, and Elijah Moore are the key wide receivers on this roster. Mike LaFleur is the offensive coordinator for the Jets.

New York plays in a tough AFC East, and they wouldn’t have the fourth-best quarterback in the division with Derek Carr if they had him instead of Zach Wilson potentially.

The Indianapolis Colts will be in play for another quarterback once again this off-season. Matt Ryan is going to be a one-year thing, and the Colts need something more than a one-year thing at this current point. General Manager Chris Ballard is lucky that he didn’t get fired because Frank Reich was his scapegoat for making the wrong quarterback decisions recently, like Carson Wentz.

Sam Ehlinger has also started some games, but he isn’t the answer. Would owner Jim Irsay keep interim head coach Jeff Saturday around for the long term? It remains to be seen. Derek Carr would have Jonathan Taylor in the backfield and rookie wide receiver Alec Pierce and Michael Pittman Jr. to throw to.

Carr would maybe become the best quarterback in the AFC South. This is one of the weakest divisions in all of football, and it would be something to watch for.

The Tampa Bay Buccaneers probably don’t expect Tom Brady to come back after this season ends. Brady is 45 years old, and at some point, he needs to turn his focus to other things than football. Tom Brady is showing that father time is catching up to him. He has nothing left to prove in his illustrious NFL career.

Derek Carr would be a perfect quarterback to take over in this offense. Todd Bowles as the head coach and Byron Leftwich as the offensive coordinator would be a good thing for Carr. He would have Mike Evans, Chris Godwin, and Julio Jones to throw the football to.

The NFC South is also a very weak division, and Derek Carr would also be the best quarterback division right away if he played in this division.