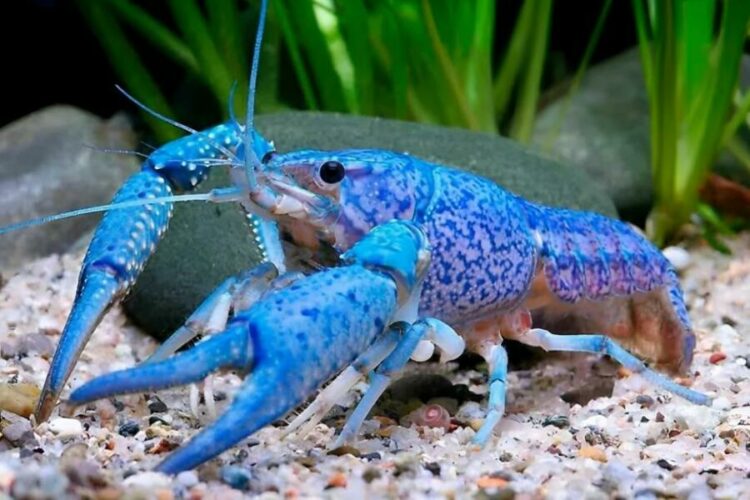 While there are many unusually colorful creatures that live beneath the water, none are quite like the blue lobster. The likelihood of stumbling upon one of these bizarre creatures is almost one in two million.

Despite being a prized delicacy due to its scarcity, many fishermen have recently been forced to release blue lobsters because of their declining population. The crew of an Ohio Red Lobster restaurant made headlines in July 2020 when they found a blue lobster in their product supply. Locals praised the chain for bringing it to a zoo nearby rather than on a dining table.

Despite this, people are drawn to the blue lobster because of the mystique that surrounds its vivid colors.

Why are Blue Lobsters Blue?

A blue lobster seems different from a standard American or European lobster because of its remarkable color, although they are actually just different shades of the same species. Dark brown, green, or pale orange are the most common colors of American lobsters. Dark navy blue or purple-hued is the color of European lobsters.

As a result of a genetic anomaly that causes an excessive amount of a particular protein, they have a distinctive shade. The chances of having this coloring aberration, according to specialists, are one in two million due to their exceptional rarity. These statistics are only speculative approximations, though.

Due to the rarity of these lobsters, when workers at a Red Lobster restaurant found one among the lobsters, they acted swiftly.

After corporate representatives contacted the Monterey Bay Aquarium, the blue lobster was relocated to the Akron Zoo in Ohio, where it now resides. In homage to the chain’s mascot, they gave him the name Clawde.

However, the Atlantic shores of North America and Europe are where you’re most likely to see one of the two million blue lobsters that exist in the wild. But these lobsters can also be found in other countries, including Australia and other freshwater regions.

The likelihood of catching a yellow lobster is considerably lower, at one in 30 million, according to the University of Maine’s Lobster Institute. However, the likelihood of obtaining a lobster with two distinct colors is one in 50 million. Comparatively, the likelihood of locating an albino or “crystal” lobster would be one in 100 million, as opposed to the two fishermen in England who did it in 2011 and the other fisherman in Maine who did so in 2017.

Know About The Inside Life of These Rare Sapphire Crustaceans

According to specialists, the blue lobster’s striking appearance merely affects how its skin color. The bright skin makes them more vulnerable to predators, thus some people speculate that they might act more aggressively than regular-colored lobsters. But then again, it is already known that lobsters are a fairly aggressive species.

The average lobster has ten limbs, and like other crustaceans, it is closely related to shrimp and crabs. Like regular lobsters, blue lobsters eat mollusks, fish, and many kinds of sea algae with the help of their powerful claws.

These critters may appear scary with their razor-sharp pincers, but they won’t cause much harm. Although blue lobsters also have weak eyesight, this enhances their senses of taste and smell.

They still manage to find mates despite having impaired vision. When a female lobster lays an egg, she carries it under her belly for a year before releasing it as a larva. While still very small, the larvae start to shed their exoskeleton as they develop.

Lobsters can live up to 50 years after reaching adulthood.

It’s uncertain when the first blue lobster was caught or who did it. However, in the 2010s, as pictures of their vibrant exteriors went viral online, these magnificent rare animals began to earn notoriety.

The Worth of Blue Lobsters?

Because blue lobsters are so rare, many experts believe that they are, in some ways, more valuable than regular lobsters. These rare lobsters are no exception. More commonly than not, scarcity results in a higher monetary value.

Some seafood lovers contend that blue lobsters truly taste sweeter than normal lobsters, despite the lack of scientific evidence to support this. That may be the reason it cost $60 a pound when purchased as a meal at a steakhouse in Maine, United States.

However, eating lobster wasn’t always seen to be pricey. In Victorian Europe, people considered lobster to be a common food and occasionally used it as fertilizer. The practice of feeding inmates lobster was viewed as harsh by many Americans. In the end, the government enacted rules that made it illegal for jails to ever serve them to inmates.

Despite the high prices they can fetch at dinner, the imperative to protect these endangered animals have mostly trumped the desire of individuals to make money. Fishermen and chefs alike who come upon a blue lobster are typically forced to either release it into the water or give it to an aquarium.

It appears that the blue lobster’s distinctive color is essential to its survival in addition to being stunning.

17 Benefits of Having a Pet Cat

Which are The Top Pet Insurance Benefits?