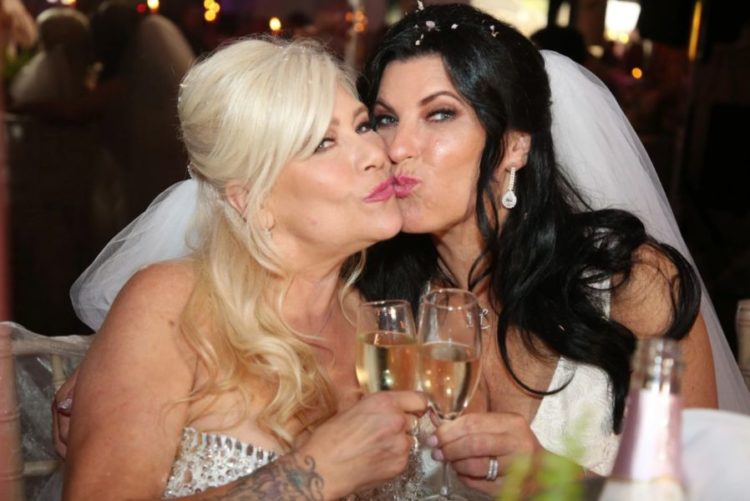 The showbiz world often comes up with news that can often surprise you, isn’t it? One news that has recently become the talk of the town is the Page 3 icon Sam Fox marriage with long-term partner Linda Olsen in a lavish ceremony. So if you are an avid social media user, you must have indeed come across this news. Just when we had lost all hopes of seeing the iconic Page 3 model’s wedding ceremony, she gave us a surprise.

In fact, she has made sure that the media has full coverage of her wedding functions along with exquisite decorations. Therefore, we were lucky enough to glimpse the wedding venue. Starting from the couple’s first dance to the cutting of their special three-tier cake, we got to see it all.

So would you like to know more about the lavish wedding ceremony of Sam Fox and Linda Olsen? You need to stay with us until the end as we will share with you some of the significant aspects of the celebrity couple here. Let us have a quick glance!

Who is Sam Fox?

Even though this personality needs no separate introduction, we will share some significant details about her here. Samantha Karen Fox or popularly known as Sam Fox, is an English pop singer. However, apart from that, her fans know her mainly as a former Page 3 model from East London. In fact, she gained popularity only when she was 16 years old. Her mother had entered her pics in an amateur modeling contest in a tabloid newspaper.

After she became second in the contest, she made her first public appearance in February 1983. Since then, she continued to appear on Page 3 until 1986. This helped her become the most popular pin-up girl of her era and the most photographed British woman of that time.

However, she thought of shifting her focus to pop music after three years. So she released her first single, “Touch Me (I Want Your Body),” in March 1986. Needless to say, it did not take much time to become the number one track in Australia, Canada, Finland, Greece, and several other countries. Moreover, it also became the first of her three Top 10 singles on the UK Singles Chart.

Later on, she also came up with albums like “Samantha Fox,” “I Wanna Have Some Fun,” “Just One Night,” and several hit ones. In fact, in 1988, she also received a Brit Award nomination for the Best British Female Artist. At the same time, Fox has also appeared in many films and reality TV shows and has often worked as a TV presenter. Even though she had dated many men when she was young, in 2003, she publicly emerged as a lesbian.

Some Significant Details About Sam Fox & Her Partner Linda Olsen

As per the sources, Linda Olsen is a Norwegian woman and a mum of two. Until her marriage, she kept her private life away from the spotlight. However, we know that, unlike Sam Fox, she is not from the showbiz world. Linda and Sam started dating back in 2016. It was a year after Sam’s former partner Myra Stratton died.

So it is unclear how Sam met Linda. However, in 2016 she revealed that she was in love again. In fact, she was very happy to get her in her life. Moreover, this also helped Sam get over the pain of losing her former partner Myra. According to the sources, Myra died after a long battle with cancer at 60.

In fact, before she died, she wanted Sam to settle down with someone who would love her like her. She said, “I think you’d be great— just go and do it. You’ll be really good, Sammy; people don’t realize how witty you are and what fun you are.” So when Sam, a person like Linda, who was already a mother of two children and was leading her private life, fell in love at first sight.

Presently, the couple shares a home their home with their two cats, Melody and Fanny, along with Olsen’s kids. So indeed, they are living happily together in their luxurious home after their marriage.

How Did Sam Look on Her Wedding Day?

Many of you must have come across the pictures from her wedding ceremony. So Yes, Sam looked sensational in her beautiful strapless white bridal gown. In fact, the gown had a netting at the bottom, and silver gems were sewn into the corset.

Therefore, the bridal gown made her look drop-dead-gorgeous on that day. It also had a lace trail with an elegant silver print design. At the same time, she wore her hair in a top chignon with a sweeping fringe. She had a bouquet of pink roses to complement her look and wore sparkly strappy heels.

In addition, she dazzled with flawless makeup and completed her look with bold pink lipstick. So you can well understand how beautiful she was looking. Moreover, the celebrity also posed for photos inside the King’s Oak Hotel, Loughton. Meanwhile, her partner Linda was also looking no less gorgeous than her. She was looking dazzling with her pretty bridal gown and white veil.

How did The Couple Celebrate After Their Wedding?

The couple had indeed enjoyed themselves to their fullest on their wedding day. At the same time, Sam and Linda made sure they posed with their wedding guests, including their eight bridesmaids, who looked equally gorgeous. Moreover, the couple also took the celebrations inside for the reception.

Therefore, they beautifully decorated the venue with pink roses and silk ribbons. In fact, we also saw the lovely couple cutting their pink three-tier wedding cake before hitting the dance floor. At the same time, they also shared a touching moment when they embraced each other. Their adoring gaze showed that they were head over heels in love with each other.

It was just a few days back that they tied the knot with around 127 guests consisting of family and friends. However, they had scheduled their wedding for 2020, but thanks to the pandemic, it was delayed. Sam had helpers to shield her from the rain with giant white umbrellas as per the sources. In fact, after the wedding ceremony, there was breakfast for the guests, and the party continued till midnight.

So as we conclude, we can say that Sam Fox was one of the famous Page 3 models and a pop singer during the late 80s and early 90s. There were very few people who were not her fans. So naturally, when she gave the media a complete coverage of their lavish wedding ceremony, fans could not help but drool at their lovey-dovey pictures. We hope they stay adorable together. If you are a fan of hers, you can look at the article to learn some of the interesting details of the celebrities’ lives.

Also Read: How Long were Linda Kolkena and Dan Broderick Together?