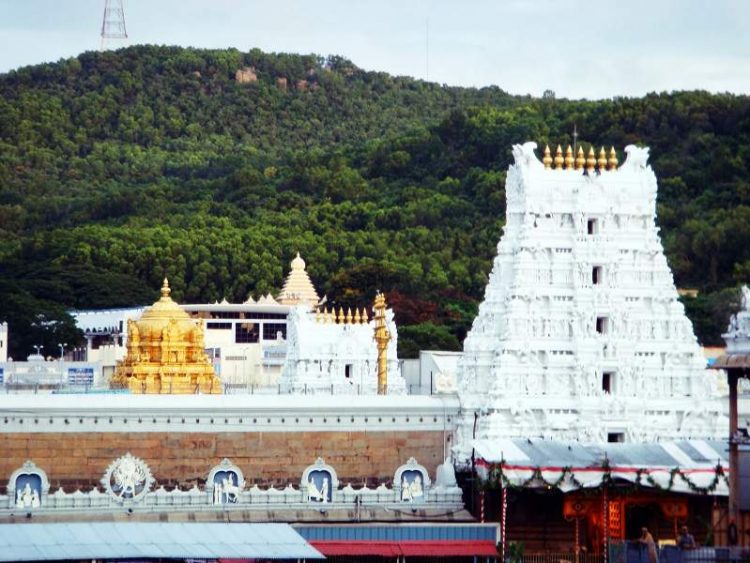 Sri Tirupati Balaji Venkateswara Temple is a well-known Hindu temple located in the hill town of Tirumala in Andhra Pradesh, India. Hindus all over the world visit this place to worship Venkateswara which is a form of the God Vishnu. Also, they believe that he appeared here to save the world from trials because of Kali Yuga. That is why the place is called Kaliyuga Vaikuntha. Moreover, the Lord is given the name Kaliyuga Prathyaksha Daivam. The people who run the place are body Tirumala Tirupati Devasthanams which is under the Andra Pradesh Government.

The Tirumala Hills make the part of the Seshachalam Hills range. Then the Hills have seven peaks which mean the seven heads of Adisesha. The Temple is in the seventh peak called Venkatadri. Also near to the temple is the holy water tank Sri Swami Pushkarini. Therefore, the temple is also well known as the “Temple of Seven Hills”. The constructors of the temple followed Dravidian architecture in the period of 300 AD. You can find all the details about the Sri Tirupati Balaji Venkateswara temple here.

There is a belief that the Lord will reside in the temple until the end of Kaliyuga. Then at the end of Kaliyuga, the other incarnation of Vishnu known as Kalki will destroy all the things on the earth. No humanity will be left after this. Then the formation of a new Yuga will take place. That is why the Tirupati Balaji temple is well known as Vaikuntha of Kaliyuga also referred to as Kaliyuga Pratyaksh Daivam.

When Lord Vishnu came to the earch

According to the sources that tell the history of Tirupati Balaji Lord Vishnu came to the world to bless the worshippers during the age of Kali. Then one-day Sage Brighu wanted to see whom among the Holy Trinity is the greatest. So he talked with Lord Brahma and Lord Shiva but he did not get any satisfaction. After that, he went to Vaikuntha the abode of Lord Vishnu and kicked him on his chest. At this time Goddess Lakshmi was residing in the chest of God Vishnu so she felt insulted. Therefore, she came down to earth after that.

Lord Vishnu was very sad to find his consort Mahalakshmi gone. Therefore, he followed her down to the earth and saw that she has born as a child to a King’s family as Padmavati. So Lord Vishnu entered an anthill and began to meditate. At that time Lord Shiva and Brahma came to him as a Cow and fed him. Then according to a divine plan the incarnation of Lord Vishnu, Venkateswara met Padmavati and they fell in love. In the end, the Gods approach the King for his daughter’s hand in marriage to Venkateswara.

Why Tirupati Balaji is so powerful?

The devotees wait in a long line to get a glimpse of the pious idol in the garbha griha. Then they get the Darshan of the Lord. After they feel blessed as this is one of the great opportunities of their life. They believe that if they get the Dharshan the Lord will grant them their wishes.

As he is the Lord who came to the earth to relieve the humans of the trails of Kali Yuga his devotees have faith that he will help them in their distress. Moreover, there are two imprints on the chest of the Lord that shows the places of Lakshmi and Padmavathi. Also, the Lord transforms into a stone and that is why the idol is powerful.

Tirupati Balaji is one of the richest Gods. The Devotees of the Lord often donate money and jewels for him. Also, they offer their hair to the Lord. According to the legend the Lord borrowed money from Kubera. Therefore, the devotees offer the Lord money for him to pay back the loan. The devotees feel blessed when they offer their wealth to the Lord. They feel that materialistic riches are not important for them.

Sri Tirupati temple is one of the most divine places in the world. That is why many people visit it to get blessed.