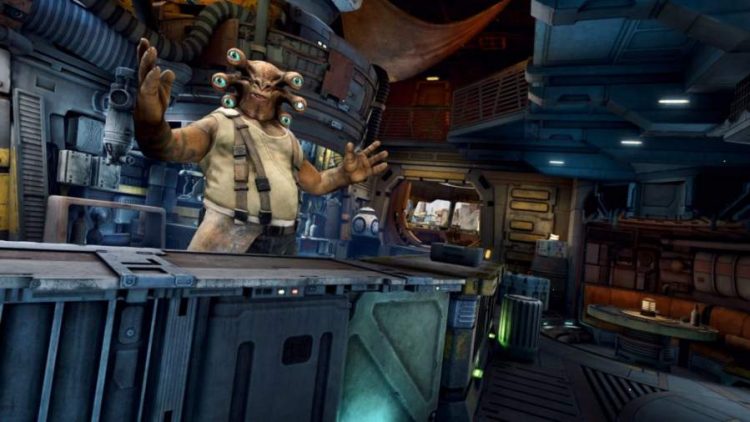 This is a great action-adventure VR experience game made by ILMxLAB along with Oculus Quest in 2020. This is a story that connects with Star Wars: Galaxy’s Edge that revolves around Batuu. The story happens in the period of Episode VIII of The Last Jedi and Episode IX of The Rise of Skywalker. It also consists of Black Spire Outpost. This experience is very different than the previous ones because it carries the story forward.

For instance, the players will receive an adventure of their own as they explore many parts of the galaxy. Many old characters return to the game and also new characters get introduced to make the gameplay even more amazing. The players have to make choices to move forward in the game. Know all the details about this amazing VR game here.

The gameplay of Star Wars: Tales from the Galaxy’s Edge

The player will take up the role of a droid technician and his ship gets boarded by Guavian Death Gang. The ship is orbiting the planet of Batuu. The first order is giving a good amount of cash for some cargo in your ship. But the player has to save his life by taking the cargo and manoeuvring the ship to safety. Then the player finds himself in the Batuu planet outpost. Moreover, the player has to fight with the pirates too.

The game contains park-style smorgasbord adventure rather than the former shooting-based campaigns. The player will also come to meet with many kinds of baddies from places around the galaxy. You can also get the chance to travel through time in the galaxy. The setting of the planet Batuu is in Outer Rim Territories which is far away from all the battles between the first order and the resistance.

The story and characters of Star Wars: Tales from the Galaxy’s Edge

The main player of the game is the droid technician. The other important character in the game is Azumel bartender and his name is Seezelslak. He is aware of everyone and knows about everything that happens in the outposts. His stories will help the player in his missions. For instance, his stories will take you to the time and place of important events in the Star Wars universe. You can also talk with characters like Yoda and C-3PO.

Bobby Moynihan has voiced Seezelslak and Tara Rashins has lent her voice to a pirate. Anthony Daniels has given his voice for C-3PO which makes the game appear real.

The release details of Star Wars: Tales from the Galaxy’s Edge

The Star Wars: Tales from The Galaxy’s Edge is now readily available on the Oculus Store for the price of $25. Part 2 of this excellent game will release sometime in 2021. We have to wait to know more details about this. Until it releases enjoy the great VR experience of part 1.

‘Star Wars: Tales from the Galaxy’s Edge’ will make you sit at the edge of your seats. Learn many things about the Star Wars universe with this game.