Step-by-step Guide on How to Set Up Solitaire 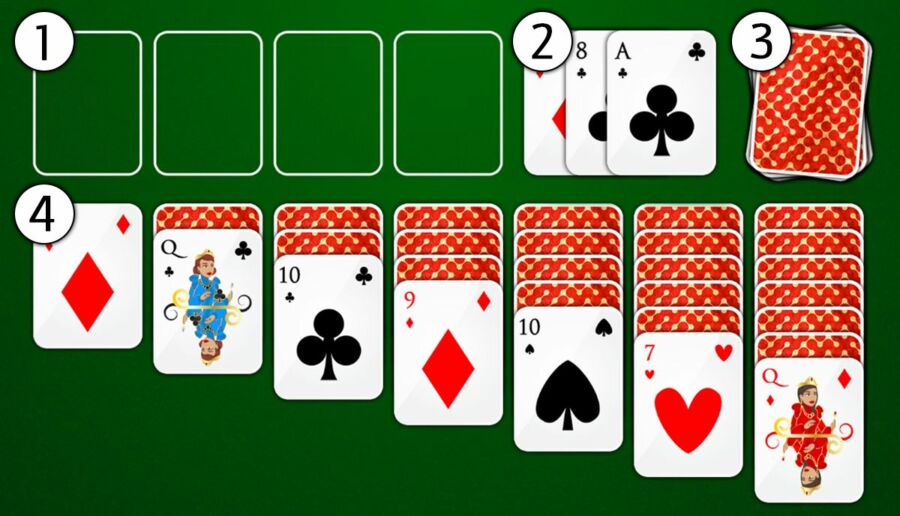 Solitaire is designed for single players, unlike most card games requiring many players. It can be set up practically anywhere in about a minute once you are familiar with the board layout and the game’s rules. The game may keep you entertained for many hours and is a terrific way to enjoy the time. In this article, we’ll learn how to set up Solitaire.

For more information regarding how to set up Solitaire, continue reading!

A conventional 52-card pack of playing cards is required to play Solitaire. Remove the joker and instruction cards after opening the pack. Make sure the deck is evenly distributed by performing a few rounds of shuffling before you begin dealing.

2. Deal seven cards in a row

Deal the initial card and further put it face up on your left-hand side. After then, deal six additional cards face-down in a row to the right of this card, ensuring that each card has its spot.

3. Skip the first card and then deal six cards

Deal six more cards onto the piles following that. The second stack of cards from the left, face up, should get the first card. Deal one face-down card onto each pile as you move to the right.

4. Count over to the third card and then deal five cards

Deal one card face up, starting with the third stack from the left. On each of the piles to its right, deal four additional cards, this time facing down.

Deal three cards facing down, starting with the fourth stack from the left, followed by one card face up. Add one card to each of the stacks to the right of this stack.

In your seven-card stack row, count over to the card that is the fifth from the left. One card should be dealt face up on this stack, followed by one card dealt face down onto each of the two piles to the right.

7. Count over to the sixth card and then deal two

8. Deal one last card face up

There should only be one stack remaining that does not possess a face-up card. To the right of your Tableau should be this stack. Deal one card face-up onto this stack. Six cards should be face down in this stack, and the top card should be facing up.

Your Tableau is complete once you deal with the final card. The trickiest part of how to set up Solitaire is dealing with Tableau so that the subsequent part will be simple.

Placing The Rest of The Cards

To know how to set up Solitaire, continue reading below!

1. Place the remaining cards face down

The cards you have left can be placed right above the Tableau on the left side once you have set up your stacks. This will be your “Hand” or “Stock” pile.” As the game progresses, you will draw cards from this pile.

2. Identify the space for your discard pile

Any cards you draw but can’t use go into the discard pile, sometimes referred to as the “Talon” or “Waste” pile. The Talon pile will be empty when you begin your game. When playing, set aside a spot close to your Stockpile where you will create your Talon pile.

3. Leave room for your Foundation piles

As you play Solitaire, the cards you remove from the Tableau stacks will be placed in the Foundation piles. As you play, provide enough space for four stacks of cards. Your Foundation piles will be empty at the beginning of your game, so all you need to do is set aside space above your Tableau.

If this is your first time playing Solitaire, you should first spend some time learning how to set up Solitaire and play the game. The goal of a solitaire game is to move every card from the deck and the tableau stacks to your foundation piles. Nothing is placed in these piles at the start of the game, and you arrange the cards in these stacks from lowest to highest and according to suit.

To play, you’ll need to draw and put in cards. One card is drawn at a time, and you can either play it on one of your piles or discard it if you can’t use it. Depending on the color and order of the cards, you can play one on one of your tableau stacks. Red and black must be alternating colors.

To expose face-down cards, you can move cards between stacks. Further, once a face-down card is exposed, one can flip it over and use it.

You can flip the stack over and use those cards again once you’ve used up all the cards in the discard pile. Every time you go through the deck, keep drawing a card, one at a time.

5. Transfer cards to the foundation piles to clear them

You can move cards from the tableau stacks to the foundation piles when you expose cards and draw cards. There should only be one stack of each suit, and each pile must start with an ace card.

This was a step-by-step guide on how to set up Solitaire. Give it a complete read to become a pro in this game!

Also read: When You are Bored, Alone, or Both, Playing a Game of Solitaire Could Just Be What The Doctor Ordered