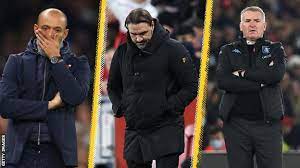 We have passed the halfway point of the 2022-23 Premier League season, so it is coming to that stage of the campaign where clubs might start considering sacking their respective managers in a bid to turn around their fortunes – whether that’s securing a lucrative European spot that is slowly slipping out of their grasp or avoiding the dreaded drop.

Therefore, it seems inevitable that we will witness the sixth managerial casualty of the season sooner rather than later – with Everton boss Frank Lampard, Chelsea’s Graham Potter, West Ham United gaffer David Moyes and Southampton manager Nathan Jones, who was only appointed the Saints’ head coach in November, amongst the favourites to go in the Premier League odds.

So, while we wait patiently to discover who will be the next manager to face the chop,

Let’s take a look at the unfortune five who have already paid the ultimate price for their poor results.

The first manager to be sacked this season, Scott Parker didn’t even make it passed the end of August – being dismissed by the Cherries after just four games due to airing his issues with the board’s lack of ambition and funding in public.

With heavy defeats to Manchester City (4-0), Arsenal (3-0) and Liverpool (9-0) in succession, it was unlikely Parker would have survived for much longer anyway. He has since been appointed the head coach of Club Brugge in Belgium – a move which took many people by surprise.

In hindsight, it became apparent that Thomas Tuchel’s time at Chelsea was coming to an end before the 2022-23 Premier League season even got underway. The Blues largely struggled in pre-season and the German boss disagreed with the new owners’ transfer targets- as Todd Boehly and Tuchel reportedly clashed because the American wanted to bring Cristiano Ronaldo to Stamford Bridge.

Once performances dropped and results turned sour, it was inevitable the Champions League winner was going to be given the boot – and Tuchel was sacked following a 1-0 defeat to Dinamo Zagreb in early September. Things have arguably regressed further under his successor Graham Potter, however.

Wolves were hit and miss under Bruno Lage last season, as they initially struggled under the Portuguese coach before finding some kind of momentum to finish a respectable 10th in the Premier League.

However, with just one win in their first eight Premier League games, Lage was given his marching orders at Molineux in early October. In his defense, lack of quality attackers arguably cost the 46-year-old his job more than anything else.

Less than 12 months after he walked out on Rangers for the Aston Villa job, Steven Gerrard was sacked by the Midlands outfit for a string of mediocre at best results. Villa have the ambition to be a top 10 team, and they have the budget to boot – with the former Liverpool captain given hundreds of millions to spend over the course of two windows.

A 3-0 defeat away to Fulham on October 21 was the final nail in the coffin for Gerrard as it meant Villa had lost six of their opening 12 Premier league games, winning just two. The Scouser has since been heavily linked with the Poland job.

Not a lot of managers have ever managed to survive as many humbling results as Ralph Hasenhuttl, as the Austrian lived to see another day after not one but two 9-0 thrashings against Manchester United and Leicester City in successive seasons.

There were reports that Hassenhuttl had lost the dressing room at St. Mary’s from the beginning of the season and he was sacked in November after almost four years in charge of the south coast side with the Saints in the relegation zone.

Also read: Aleksander Ceferin will Stand for a Third Term as President of UEFA