The Donovan Race: Top 5 Teams That Might Lead The Race 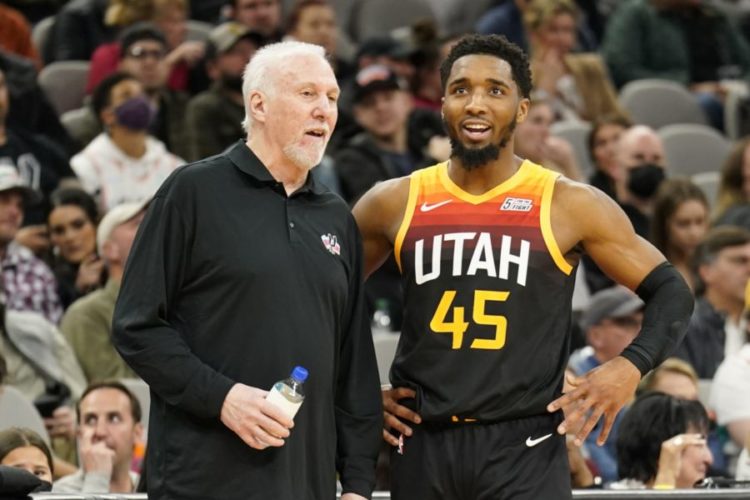 The Donovan Race: Top 5 Teams That Might Lead The Race

The world of sports is a highly competitive one. Irrespective of whichever sport you play, success is the only key to survival. Especially in a popular league like the NBA, a team needs to be very careful in planning its path to success. But for the Utah Jazz, things have not worked out well for quite some time. That is why, following a disappointing season, major changes seem imminent for the Jazz. Tony Jones took to Tweeter to hint at the change. Click the link below to see the tweet :

If the Jazz really reshuffles the deck, then several players will be available this offseason. The likes of Rudy Gobert, Mike Conley, and Bojan Bogdanovic can be real assets for other teams. However, all eyes are on the Jazz star Donovan Mitchell. His ability to score, coupled with the fact that he is only 25 years old, will make him a prime target for other teams if the Jazz decides to release him.

Check out our five teams that can make an intriguing offer to Donovan.

The Spurs have always been a magnet for star players. However, things have been different for them since Tim Duncan’s retirement. That is why there is a fair chance of the Spurs going for Donovan. In fact, they were linked to Donovan earlier in the process. The Spurs at present lack star power. Though they have Dejounte Murray, he cannot do it all by himself.

Therefore the Spurs are looking to build a formidable team and Donovan can be just the right choice for them. Thus they can offer one of the highest picks for Donovan.

The Pelicans had a fair enough season as they made it past the play-in tournament. However their star player, Zion Williamson remained on the bench, as he missed most of the season due to injuries. In fact, rumors have surfaced suggesting a rift between the star and his team. However, the team’s position regarding Williamson’s future remains unclear. They may offer him an extension or, may trade him. But in either of the cases, Donovan’s addition to the team will be a fascinating one. Being a prolific scorer, Donovan will be a much-needed aid to Williamson, as he would take some load off him.

Therefore, Donovan might be the Pelicans’ final attempt to rejuvenate Williamson. Thus, there is a fair chance that they would make a lucrative offer to secure Donovan’s service.

The New York Knicks have many attractive assets to lure the Utah Jazz into making the Donovan deal. Moreover, the Knickers had a forgettable season, and they want to make amends for that. Though they made it to the first round of the playoffs after almost 8 years, they were literally crushed by the Hawks. The Knickers will be desperate to make it to the playoffs again. Thus, Donovan will be a great addition to the team, given his ability to keep on scoring.

Though the Heats at the moment are focused on defeating the Sixers, they can go for Donovan. The Heats have a lot of assets. Since Utah Jazz is looking for assets, Miami Heat can seal the Donovan deal. Donovan will be a prized addition for a team like the Miami Heat, who aspire to stay at the top of the Eastern Conference. As mentioned earlier, the Heats have a lot of assets and this seems to give them an edge over the other contenders in the Donovan race.

The Utah Jazz might go for the 22-years old Tyler Herro, who is steadily growing into a big name, averaging about 15 points in every game of the playoffs. Thus, Miami Heat looks more likely to seal the Donovan deal.

With D’Angelo Russell approaching a possible exit from the Timberwolves, he can be a potential part of the Donovan deal. They already have superstar players like  Karl-Anthony Towns and Anthony Edwards. Adding Donovan to them can make them a formidable side in the Western Conference.

Thus, though it seems a far reality, it will not be unnatural for the Timberwolves to go all out for Donovan.

Also Read: Chris Paul’s Anger After An Incident Involving His Wife & Mother During The Game 4 Vs. Mavericks