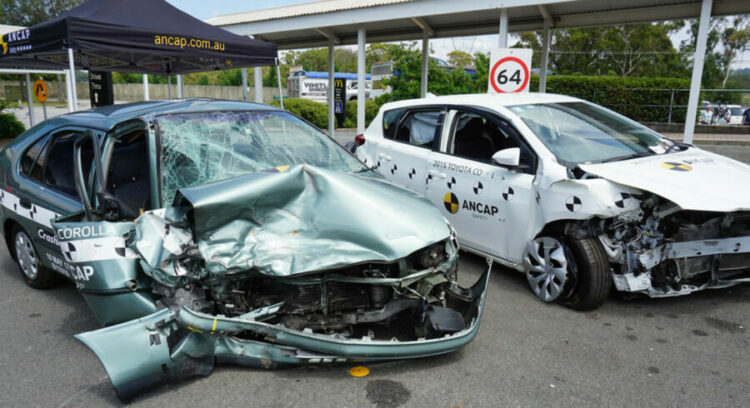 “A large car must be safe.” This is a myth widely accepted in today’s SUV-ruled auto market and remains true from vehicles two decades old. The average age of a car in the United States is about 12 years old, which may not amount to much at first thought. After all, vehicles from those years can be relatively technically advanced, convenient, comfortable, fast, and safe – but are they really safe? There where cars that get listed in the list of the most unsafe cars.

Here are the crash tests of the most unsafe cars from the two most recent decades.

This Audi model was set to become a leading figure in the model range of the German brand. And it did, achieving enormous market success. At the moment, a lot of copies are still on the road, and many are available on the secondary market. But anyone who dares to see the results of crash tests may be surprised.

The bodywork is seriously deformed. The most serious injuries concern the chest and legs. The next generations brought a significant improvement in safety.

Appreciated for its driving characteristics and efficient, reliable power unit, the Japanese sixth-generation Honda Civic does not pride itself on the safety it offers to passengers. In the test carried out in 1998, it obtained only 3 safety stars. In a frontal collision, the driver’s legs are particularly vulnerable, while in a side collision, the chest is in a dire state.

Multiple personal injury lawsuits were qualified to have their day in court involving this model. Successive generations have significantly increased the level of security.

Dear, prestigious, and classy is how the Mercedes C-class was marketed. He achieved quite a success on the market, but those who suffered accidents will certainly not remember the car with pleasure. Legs and chest were the two most reported bodily injuries. It may seem that a car from the premium segment, with a star on the hood, would provide more safety.

It was a grim disappointment and only received 2 Euro NCAP stars. The next generations, however, did almost perfectly well, receiving 5 stars.

There is Mercedes, Audi, and the third of the “German trio” – BMW. It is appreciated for its high-quality driving characteristics, above-average drive units, and sports sensations. But the fun ends in a collision where the two-star Series 3 fares very poorly. Severe deformation of the bodywork and essentially complete life-threatening injuries to the driver ruined the broader appeal. Thankfully, its successor – the E46 – has already received a solid four stars.

Chevrolet Aveo was quite popular in the US for its time, mainly due to its low price and relatively modern design, but a major disappointment. There is an almost complete risk to the driver, except for the head and neck. The passenger receives much better protection, all despite the set of airbags. This result is comparable to cars from the early 1990s.

A big car does not always mean a safe car. This is the case with the Kia Carnival model, and everyone who thought that they would be protected were severely disappointed. After collision, massive deformation of the body is visible, many elements are dangerously displaced, causing serious injuries to all seven passengers.

Another big candidate, an American in addition, and another disappointment. Here, both the 1999 study and the 2007 study are virtually mirrored. In the 1999 model, the driver has virtually no chance of recovering from the accident. Almost a decade of difference did not bring much improvement, and the drive was still terribly exposed to death or disability. In principle, only the head protection had been improved.

Also read: 10 Things to Know Before Buying A Used EV, According to Experts