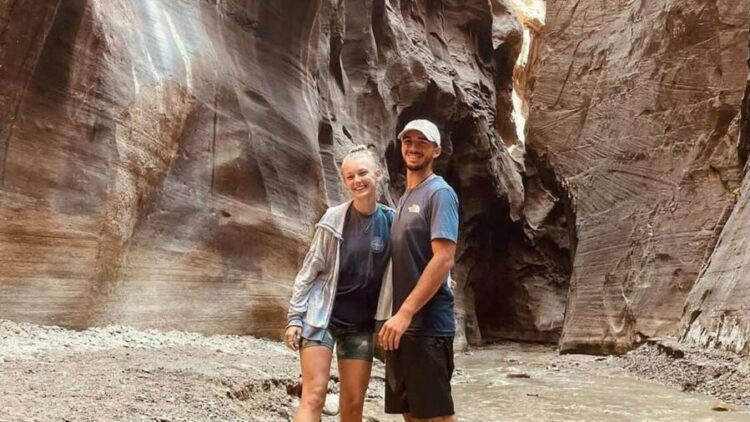 Nowadays, crimes and suicide rates have increased to a great extent. Especially in countries like the United States, often we come to hear some of the astounding crimes. In this regard, we can talk about Gabby Petito and Brian Laundrie’s case from “Van Life.” So as per the sources, the police found a 22-year-old woman from Ling Island in New York strangled in Wyoming’s Grand Teton National Park last September. In fact, several weeks later the police also found her fiance Brian Laundrie dead by suicide.

Pretty shocking, don’t you think? Two of them died mysteriously one after the other. What might have led to the death of this young couple? You might also be quite curious to know, right? Let us share with you some of the significant and spine-chilling details of the case.

The Young Couple Began Their “Van Life” Journey on YouTube

Many of you might be already quite familiar with the faces and names of the young couple that we are talking about here, right? Yes, you guessed it right, Gabby Petito and her fiance Brian Laundrie posted a YouTube video last August. They documented the beginning of their first cross-country journey together in the video.

Do you know what they write in the clip’s caption? Well, the caption was pretty interesting. They wrote that they both decided that they wanted to downsize their lives and travel full time. Therefore, they “handcrafted” their own “2012 Ford transit connect” to embark on their travels.

So just when the couple made so many plans…what might have happened that led to this tragic end? It is very hard to believe that the two young YouTubers are no more in this world. So what led to their mysterious death? Let us find out more down below!

Did Laundrie Hit Gabby Petito in Any Way?

You might be thinking that we are just speculating, however, it is not true. There was a 911 caller who witnessed Laundrie slapping Petito. Let us find out what exactly happened. So a couple of days before they posted their video, a man called the police to report that he saw the couple arguing outside a food cooperative. It was Moonflower in Moab, Utah. The man told the dispatcher that he saw a man hitting a female, according to the audio of the call.

According to the caller, they were driving by and the gentleman was slapping the girl. “He was slapping her?” the dispatcher asked.”Yes, and then we stopped. They ran up and down the sidewalk. He proceeded to hit her, hopped in the car and they drove off,” the caller added.

What happened next? After the 911 call, the Moab police pulled the couple over on Aug. 12, 2021. Moreover, their encounter with officers was captured on body camera footage that has been publicly released. Furthermore, what is surprising is that in the footage, Petito admits to striking Laundrie. At the same time, Laundrie admits to pushing his fiancée. So in the end, the police classified the incident as “disorderly conduct.” The mystery is deepening, don’t you think?

Did You Know Gabby Petito Family Received an “Odd Text” From Their Daughter’s Phone?

There seems to be no end to the mysteries behind the death of the young couple Gabby Petito and her fiance Brian Laundrie. One after the other shocking news is coming up that is adding to the layers of the mystery. So in this regard, the latest addition is that Nicole Schmidt, Petito’s mother received an “odd text” from her daughter’s phone on Aug 27, 2021. We come to know this from the search warrant that the police filed.

So do you want to know what message her parents received? The message read: “Can you help Stan, I just keep getting his voicemails and missed calls.” Schmidt told investigators that Stan is Petito’s grandfather. However, she also mentioned that Gabby doesn’t usually refer to him by his first name.

According to the police, this is what made the mother concerned that something was wrong with her daughter. This was the last communication that Petito had with her family. After Aug. 27, her phone wasn’t operational. Moreover, as per the warrant, she did not post anything on social media.

When Did Gabby Petito Parents Report Her to Be Missing?

Gabby Petito’s parents officially reported her missing on Sept 11, 2021. According to the sources from the media, Petito last verbally contacted her relatives on Aug 25. At that time, she was near Grand Teton National Park in Jackson, Wyoming. Moreover, Petito’s father, Joseph Petito said in an interview that his daughter’s disappearance felt like “drowning with your hands tied behind you.”

In fact, Petito’s father also added: “You can’t describe it. There’s nothing you can do. You can’t control anything.” So following the missing person report, North Port Police spokesman Josh Taylor shared the details of the case with the reporters during a press conference that the authorities in Florida held on Sept. 15, 2021. He said that Laundrie had quietly gone back home 10 days before Petito’s parents reported her missing. Pretty strange, don’t you think? So could it be that Laundrie was the one who ended Petito’s life? Let us find out more!

How Did The Case Resolve at The End? Did Laundrie Confess at The End?

So as the story unfolded and the mystery deepened, people took more and more interest in the disappearance of Petito. They also wanted to find the killer of the young woman. As you know, the police found her body near Wyoming’s Grand Teton National Park. So naturally, Laundrie was a person of interest in the case.

The FBI issued an arrest warrant to find Laundrie who had by then disappeared. In fact, his parents also claimed that they did not know where their son was. According to the medical examination, Petito died from strangulation. The forensics also confirmed that her body was outside for three to four weeks. She was not pregnant at that time.

Needless to say, Petito’s death shocked all of his close friends and family members. All of them wanted the killer to receive an equally painful punishment. It was on Oct 21, 2021, that the FBI confirmed that they found partial human remains in Park that belonged to Laundrie.

The authorities located his remains next to a backpack and a notebook. According to Laundrie’s parents, he was very upset when he left his home. His sudden death shocked the entire family. According to the autopsy report, Laundrie died due of a self-inflicted gunshot wound. His death was ruled a suicide.

He had also confessed to killing Petito to relieve her of her pain in his notebook. However, he later realized that what he did was not at all the right thing and his guilt led him to end his life as well. The FBI also declared Brian Laundrie as the killer of Gabby Petito and closed the case.

So as we conclude, we can say that this was indeed one of the most mysterious and spine-chilling murder cases that we usually hear about. Petito’s close friends could never imagine Laundrie killing his fiance and ending his life as well. As per the sources, Petito’s parents also filed a lawsuit against Laundrie’s parents. Currently, Laundrie’s family has sought to dismiss the case saying they are not obligated to share any info regarding this.