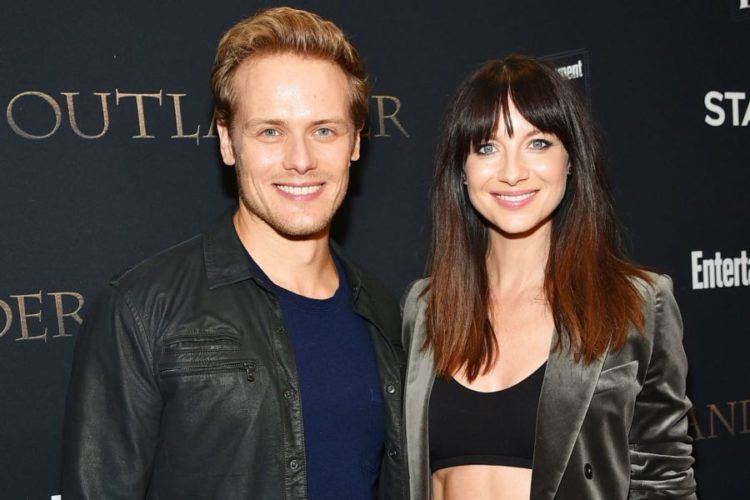 Jamie Fraser from the Outlander series has become our heartthrob and his real name is Sam Heughan. As many ladies are head over heels in love with along with the series character Claire Beauchamp the Scottish actor cannot walk on the streets without meeting his female fans. But many are unaware of his dating life. There is good news for his fans because he is not dating anyone or he is not married to anyone. He is a forty two year old man enjoying his bachelorhood and focusing on his career.

Also along with acting he is an author, producer and entrepreneur. Here you can find all the details if there is Sam Heughan Wife.

The actor shared about his relationship status

Sam Heughan appeared in the Drew Barrymore show and when the host asked him about his love life he frankly told that his demands of his job are not allowing him to focus on romance. But Heughan is dating woman because he was seen kissing a woman in New York after the premiere of Outlander season six. Yet he said “The job is so all-encompassing and we spend so much time on set and at work,” he said. “But I’m open to something. I’m not sure what I’m saying I’m open for, but I’m open”.

Also in the interview he continued saying “Certainly, relationships are hard when you’re working in Scotland 10 months a year. I travel a lot and any downtime I have, I’m trying to do other projects, so very much, my career comes first. Maybe I will find someone eventually”.

Caitriona Balfe is an Irish actress and she appeared in the Outlander as Claire Beauchamp aka Fraser the love interest of Sam Heughan character. After seeing their heartwarming and steamy romance scenes in the TV series many people wanted them to fall in love in real life too. But according to them they are just good friends.

Now Balfe is happily married to her long-time boyfriend Antony “Tony” McGill in August 2019. Her co-star Sam Heughan also came as a guest on the show. She also talked about the expectations of the fans to become girlfriend of her co-star.

She said “There’s a small vocal group that really wanted it, which is just a testament to the characters that we portray, that the love story is so inspiring and so aspirational that people just really wanted to believe in it, “And that’s a nice thing. But I think things are pretty clear now that I’m engaged to someone else. Everyone gets it now”.

So the fans cannot expect anymore of Caitriona Balfe and Sam Heughan romances. She is only Sam Heughan Wife onscreen.

Sam Heughan is a romantic

Jamie Fraser is a handsome, strong, ruddy and gallant landlord. He is also great at romance and that is the reason why fans think that Sam Heughan is a romantic. Yes he is romantic in real life too. When asked in an interview about whether the love between Jamie and Claire can be found in the real world too he said – “I think that’s maybe why Diana Gabaldon’s books have done so well and why we have a great family of people that buy into that, and continued “I think it’s something that we all aspire to and aim for so, yeah, I would like to think it’s real and I’d like to think that one day I could have that myself”.

He is a private person

Sam Heughan is a private person and because of that many details of his life are not known to his fans. His relationships are also private. One time his name was linked to Twin Peaks: The Return actress Amy Shiels. But they are just friends now and not more than that. Further he also dated actress and singer MacKenzie Mauzy when they met at an industry event.

Their relationship met wit lot of public criticism and many even started to troll Mauzy in social media. It really upset Sam Heughan who called it a schoolyard thing. Also his name was also linked with Cody Kennedy and Abbie Salt but there are no real records to prove it. It was all an internet rumour.

Do you know the mystery woman who was kissing Sam Heughan in New York? It was Monica Clarke a pretty brunette and she went on a date with Heughan at a Café Select in the Soho neighborhood on March 7, 2022. But like always when questioned about it Heughan dodged the question like always as he likes to maintain privacy. It seems Monica Clarke is a model represented by Wilhelmina Models. She is working since she was fifteen years old. Also she is currently living in New York City but she is from Victoria, Australia. She also has given an interview in DMARGE in October 2020 where she talks about how her life partner has to be.

She said “Humor is a big thing for me. And someone who appreciates sarcasm. Also, a man who is humble and can always have an interesting conversation, “Confidence without arrogance. A man who makes his woman feel appreciated and respected.” So we do not know whether the couple has found what they want in each other. Heughan fans have to wait and see.

Sam Heughan is a great man. He loves to act and focus on his job and this is the reason why he is not ready to share details of his relationships.

Also read: Have A Look At What Katherine Ryan Feels About Working in This Showbiz Industry