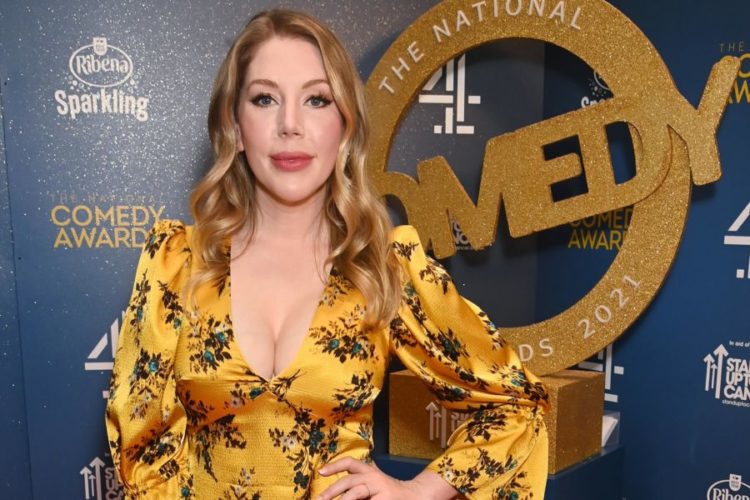 The showbiz world is difficult to live in and make your living. It might seem glamorous and exquisite from the outside; however, you must constantly be on your toes to make a decent living and maintain your reputation. In this regard, let us discuss what Katherine Ryan has said. She claims that showbiz women must constantly assess the potential threat of working with dangerous predators.

In fact, recently, we came across news where she confronted one unnamed celebrity over his behavior. She also insisted later on that it was not an isolated case. It seems she does not feel safe and secure working in this industry. So would you like to know more about Katherine Ryan? Let us share with you the details!

Who is Katherine Ryan?

Since you are reading this article, it is evident that you are curious to know about Katherine Ryan’s life. Well, you are at the right place as we will share some relevant details about the celebrity. Katherine Ryan is a Canadian-Irish comedian, writer, presenter, and actress based in the United Kingdom.

The pretty comedian was born on June 30th, 1983, in Sarnia, Ontario, Canada. Therefore, she is currently 38 years old. Ryan has appeared on various British panel shows. She was also a regular team captain on “8 Out of 10 Cats,” “Never Mind the Buzzcocks,” and several others. In fact, in 2015, she replaced Steve Jones as the presenter of Hair on BBC Two.

At the same time, she has also appeared in various TV series in the UK. This includes the sitcoms like Campus, Episodes, and her Netflix show The Duchess. Moreover, she was also a stand-up comedian. The pretty celebrity has appeared on the famous BBC’s Live at the Apollo. In fact, she also had two live stand-up specials released on Netflix, Katherine Ryan: In Trouble (2017) and Katherine Ryan: Glitter Room (2019).

After her graduation, Ryan started working as a corporate trainer and did several other jobs before becoming an actress. As a comedian, she has gained immense popularity all over the world.

Why is Katherine Ryan Feeling Insecure About Working As An Actress?

The interview which has presently made Katherine Ryan the talk of the town is where she said that women in the showbiz world are in a “constant state of vigilance” over the behavior of predatory men. In fact, the comedian said that nowadays, female actors have to question whether a job is ‘safe’ and if they consider taking it.

As per the sources, this comes after the Canadian star revealed that she once confronted a television colleague. She also accused him of being a ‘se*x pest.’ Moreover, she also put up a question about if this job is safe for her to do or not, even after knowing that she will be working with a person who might be dangerous?

However, she also mentions that now that she has reached the peak of her career, she has fewer problems with se*x pests in the industry. But Ryan mentions that the female comics still speak among themselves about predatory men in this world.

Moreover, she also made comments when the interviewer asked her whether she was facing any problems at her workplace. She recently revealed in a talk show with Sara Pascoe that she had once confronted a television colleague. In fact, Ryan has also accused him of being a se*xual predator.

If you have watched the talk show where Ryan was the guest of honor at Sara Pascoe’s show, you will know what she said. Needless to say, her words sparked a guessing game online about who she was referring to in the remarks. Miss Pascoe replied, “Also, in that instance that you’re referencing, it was about raising it.’

Meanwhile, we also know that Miss Pascoe had reported a male celebrity to a television channel. This was after receiving a phone call from a viewer who claimed to have been raped by him. It was indeed pretty serious, undeniably. So quick action was very much required. However, there was no one besides Miss Pascoe, and she had to handle everything alone.

As per the sources, Miss Ryan joins a long line of high-profile women who made similar allegations against se*xual predators. In fact, it also includes famous actors like Gwyneth Paltrow and Cara Delevingne. Both shared their experiences of abuse by the film producer Harvey Weinstein.

Needless to say, since 2017, several high-profile British celebrities have been the subject of MeToo allegations. In fact, in April, several women also accused ex-BBC Radio 1 DJ Tim Westwood of se*xual abuse. Pretty surprising, isn’t it? Moreover, more than 10,000 current and former secondary school students in the UK have shared similar experiences. So you can guess that most of them are involved in this issue of se*xual abuse.

Presently, Miss Ryan will release her series on Amazon. She also interviews other comedians, including Sue Perkins, Joel Dommett, and others. So you will be able to find out more about what she thinks in this show.

Needless to say, Katherine Ryan is one of the most celebrities in this showbiz world. Her fans mainly know her for her performances as a stand-up comedian. After many incidents where female actors were subjected to se*xual abuse, it is pretty natural to feel insecure. It is due to this reason that Ryan is trying to warn the female actors. She is also asking them to remain careful with whom they are working.

Also read: Katya Jones Talks About Why Her Marriage Did Not Survive Post The 2018 Scandal