The Truth About Nayte Olukoya and Michelle Young Relationship 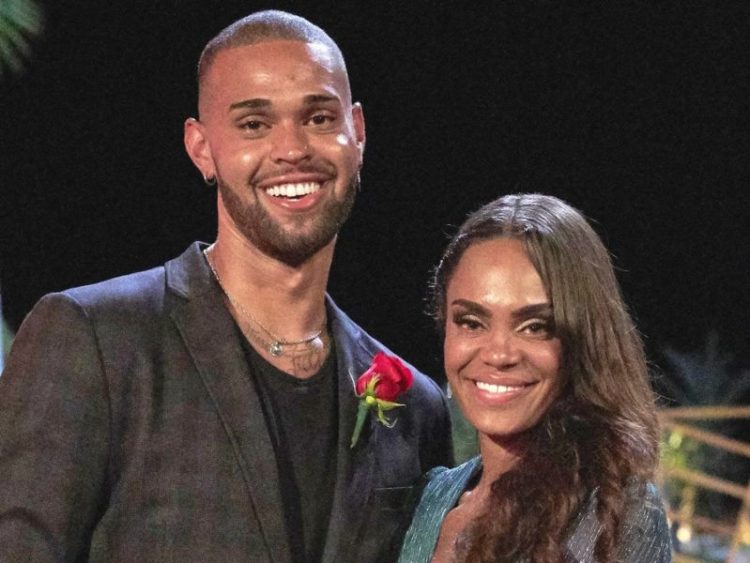 Nayte Olukoya from Bachelorette shares about his connection with Michelle Young. He received the first impression rose and first kiss from her. He explained the wonderful feelings he experienced that night. Nayte even explained what the future might hold for the couple. Everything was first that night. He was the first man that Michelle met and she quickly felt chemistry with him. But during the first meeting, Nayte was reserved with Michelle. He was hesitant to talk about his family because his parents were divorced. Yet Michelle’s parents have thirty-three years of marriage.

After some time Nayte started to open up. Michelle Young started to enjoy conversations with him. Michelle gave him the first impression rose as she felt that he opened to her even though it was hard for him. Then they shared the first kiss of the night. She said, “I feel what I came here to feel–and that’s sparks, butterflies, and everything that you wanna feel when you kiss someone.”.

During the family visit, Michelle met the parents of Nayte Olukoya. This time she learned that Nayte is not ready for commitment. In the course of the episodes, Michelle experienced lots of heartbreaks. Therefore she is not ready to have any more. That is why she decided to distance herself from Nayte. Here find out the truth about Nayte Olukoya and Michelle Young Relationship in The Bachelorette.

Nayte is working as a Senior Account Executive for Indeed.com in Austin, Texas. He is holding his position since January 2021. Before that he worked as an account executive at the company in 2019. He also worked as a Sales Representative for AT&T from 2015 until 2018. Briefly, he was a bartender in 2018/2019 in Spokane, Washington.

Further Nayte finished his studies at Eastern Washington University in 2019. He was also a Bachelor of Business Administration. It was a roller coaster ride for him. He also paid for his college on his own. Nayte Olukoya is a proud dog dad. He got a puppy in 2012 and shared about it on Instagram. It is an English Cocker Spaniel named Percy. Ever since the dog came into his life it has brought him stability.

Nayte did not have any trouble meeting women. But he came to the Bachelorette to find a lasting relationship. The woman of his dreams has to be spontaneous, outgoing, and have to keep up with his swag. He wants to connect with a woman who is just as passionate as he is. He is looking for a partner for life.

Also read: How To Keep Good Relationship with Your Girlfriend?

It was hard for Michelle Young to say goodbye to Olu, Rick, and Clayton. She was left with the final four. The contestant’s Joe, Nayte, Rodney, and Brandon got the opportunity to introduce their family members to Michelle. Everybody was nervous during the time. It seemed Michelle was on best terms with Brandon’s family specifically his younger brother.

Her experience with Joe’s family was not favorable. Things took a different turn when Michelle met Nayte’s mom and stepfather. At this moment she discovered the truth. She had doubts whether Nayte is ready for a long commitment.

Michelle found out that Nayte is not ready for marriage

Nayte Olukoya is a fan favorite. But it seems he has some baggage that he has to drop. Michelle spoke with Nayte’s stepfather and discovered that Nayte had never had been in a serious relationship before. So she found out that he is not ready for marriage.

Nayte’s stepdad also revealed that he also thinks that Nayte is not ready to propose yet. This left Michelle in a quandary. She desires to commit with her partner. But after seeing that Nayte’s interests are different than hers she thinks that he may not be compatible with her.

The fans were also quick to notice another red flag with Nayte’s relationships. He was not emotionally attached to his parents. So it appears that he does not like to get close to anyone. Nayte made it clear that he was not close with his parents. Especially he never shares to them about his relationships. But some fans shared that not everyone has a deep connection with their family members. Some people because of the circumstances prefer to keep a distance from their parents.

Despite having doubts about Nayte’s wish to form a lifelong commitment, Michelle gave him another shot. She sent Rodney home. She called Brandon’s name first and then saved Nayte. After that, she chose Joe and sent Rodney packing. Many viewers were unhappy to see Rodney leave. Michelle was also sad to see him leave. But the next week she made a big decision. She had to choose between the three.

Michelle found her happily ever after with Nayte

In season 18 of Bachelorette, Michelle Young gave the final rose to Nayte Olukoya. They two got engaged in Mexico. As Nayte caught the eyes of Michelle from the very first night he got her first impression rose. Then he received the last rose as well. Michelle chose Nayte over Brandon on Dec 21 finale. Her decision matched with the many viewers who thought that he is the best man for her.

Nayte Olukoya proposed to Michelle Young on the beach. She happily accepted it. In the season their relationship was not always smooth sailing. One time she questioned whether he was ready to settle down or not. But in the end, Nayte desired to form a lasting relationship with Michelle. So she accepted him.

Nayte Olukoya and Michelle Young are enjoying their relationship now. They are a perfect match for each other. After many years Nayte knows how to be in a serious relationship because of Michelle.

You may also read: The Truth About Joel Osteen and Victoria Osteen Relationship