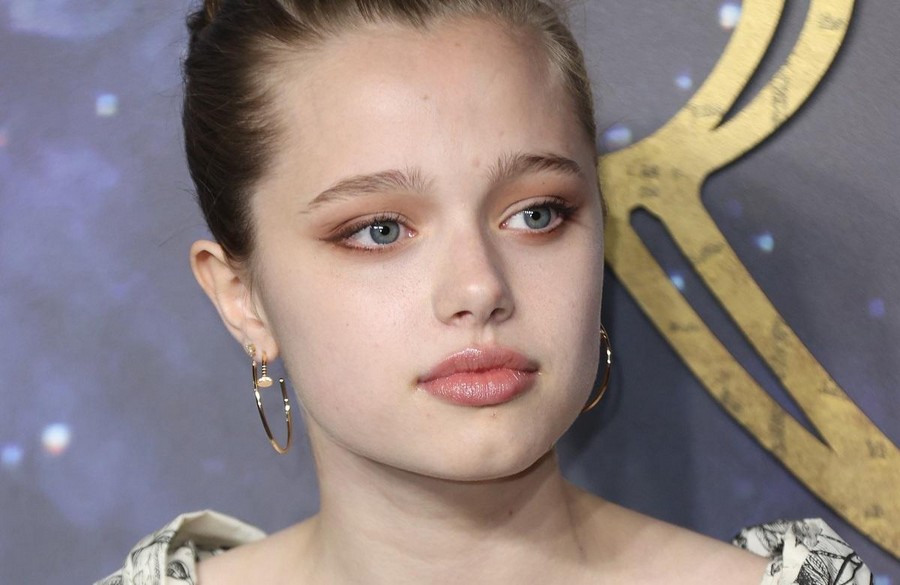 Brad Pitt and Angelina Jolie are not a couple but their children are becoming a big hit on social media. Particularly Shiloh Jolie-Pitt is getting a lot of attention lately. Many consider her as her mother’s twin. But others are saying that she is looking like her father. On the whole, she is a beautiful girl. Like many teenagers, Shiloh had a different fashion sense when she was thirteen years old. She came across as a tomboy because she was frequently seen with loose sweatshirts and jeans.

But during the Eternals red carpet premiere, she looked different. She was all grown up and looked gorgeous in the glamorous gowns. Therefore, many consider this event as her debut. She became the highlight of the night. Her pictures broke the internet. Here find out all the details about Shiloh Jolie-Pitt that you did not know.

1. 2021 transformation from a tomboy to a debutante

In January 2021 many paparazzi pictures of Shiloh Jolie-Pitt resurfaced on the internet. But these pictures looked different because she was all grown up. Gone were her awkward early teen fashions. She was sporting denim cut-offs and had ear piercings. Further, she was also having long hair tied into an elegant bun. It was a far cry from the tomboy she was a few years before when she attended the premiere of Maleficent in 2019.

Her parents shared that Shiloh thought that she was one of the boys and called herself John. They said that she was exploring gender since she was three. Therefore many thought that Shiloh wanted to be a boy. But fans were surprised to see Shiloh Jolie-Pitt in the premiere of Eternals. She looked like a classy lady and her elegance appealed to the fans. Currently, Shiloh Jolie-Pitt’s age is fifteen.

2. Shiloh Jolie-Pitt is close with her sister Zahara

Shiloh is growing up fast. She has an elder sister who always has her back. It is none other than Zahara Jolie-Pitt. Many times they are seen together such as in film premieres, shopping, excursions, restaurants and more.

Zahara is the adopted child of Angelina Jolie and Brad Pitt. She is originally from Ethiopia. They are part of the Brangelina brood who consider all their children equally. Angelina decided to give birth to Shiloh in Namibia. The other children twins Vivienne and Knox were from France. Pax and Maddox are from Vietnam and Cambodia respectively. Although they are from different places the children are close to each other. They respect each other’s place in the family dynamics. But Shiloh is particularly close with Zahara as they share a good sisterly bond. Zahara is two years older than Shiloh so she is her confidante.

When the world found out that Angelina Jolie and Brad Pitt are going to have a baby it created a stir. Shiloh Jolie-Pitt became popular even before her birth. After she was born her mother and father appeared on the cover of People. This issue was sold more than 2 million copies and Brangelina was offered $4 million for the feature. The pair gave the money to charities in Africa.

At that time Jolie was happy to start a family with Pitt. Also, they appreciated the woman of Namibia who helped bring Shiloh to the world. Their daughter’s birth was peaceful.

4. Shiloh preferred to be called John

In 2008 Jolie and Pitt shared an interesting story about Shiloh Jolie-Pitt. When she was two and half years old she asked everybody to call her John. Pitt and Jolie accepted her decision and considered her as a boy. They thought that their toddler was serious about it. Jolie said “She likes to dress like a boy and wants her hair cut like a boy and she wanted to be called John for a while. Some kids wear capes and want to be Superman and she wants to be like her brothers. It’s who she is”. The family did not make a big deal about Shiloh’s desire to be a boy and supported her. But these days Shiloh is comfortable as Shiloh.

Many people are now talking about how Shiloh looks like her mother when she was in her younger years. Jolie also has several times commented that Shiloh is more like her in her character too. She described her daughter as “goofy and verbal” like her. Jolie in her younger years liked to dress up and act. Now she is seeing her daughter doing the same thing. Shiloh appears to be shy but she is playful in her close circle. It seems she likes to entertain others. Many are expecting Shiloh to walk in the footsteps of her parents.

6. Shiloh Jolie-Pitt has her foundation

Angelina Jolie and Brad Pitt arranged for their daughter to have a foundation in Namibia. They founded the Shiloh Jolie-Pitt Foundation that works with N/a’an Ku sê Wildlife Sanctuary in Namibia. It provides care for the animals in Namibia. The animals that come to the facility get good treatment and are sent to the sanctuaries. The staff of the sanctuary also named a Cheetah after Shiloh. After growing up Shiloh watched the videos of the Cheetah and enjoyed them. Then in 2017 Shiloh got to meet the baby cheetah.

7. Shiloh is turning into a humanitarian like her mother

As her mother Angelina Jolie is a well-known humanitarian, Shiloh is also following in her mother’s footsteps. She likes to give back to others. When she was nine she traveled with her mother as envoys to United Nations. They spent a lot of time with the refugee families.

8. The youngest person to be immortalized at Madame Tussauds

Shiloh Jolie-Pitt became the youngest child to get immortalized at Madame Tussauds. Her likeness was captured when she was just eight weeks old. Her infant figure was paired with the wax figures of her father and mother. The general manager of the museum Janine DiGioacchino explained that Shiloh’s figure is a great appeal. She is an iconic figure in the museum.

Many people are interested to know more about Shiloh Jolie-Pitt. In the future, we can expect more from her.

You may also read: Jesse James Keitel Biography: Is she related to Harvey Keitel?