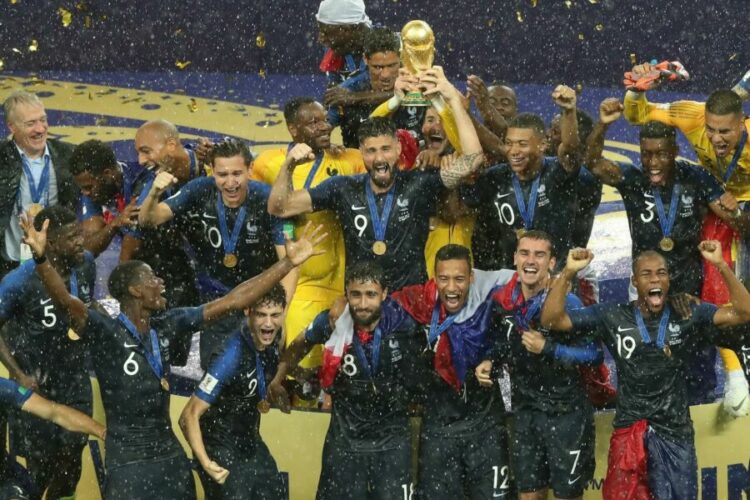 As we approach the 2022 World Cup, the pressure must be mounting on defending champions France. Didier Deschamps’ side, who lifted the famous trophy in Russia four years ago after a 4-2 win against Croatia, have been almost perfect in recent times, winning their qualifying group for Qatar unbeaten and conceding just three goals. It’s form that makes them one of the favourites to win the tournament with most World Cup bets.

France seem to have gone from strength to strength since that summer in Russia, and despite the core of that side still earning caps for their country, some have obviously moved on. The great work at Clairefontaine has ensured the conveyor belt of fresh talent is rolling out more future champions, with Deschamps stacked in a variety of positions.

While the World Cup 2022 news suggests Paul Pogba and N’Golo Kanté have struggled with injuries as of late, there are plenty of young talents emerging through the ranks that could play a big part in Qatar. Read on, as we take a look at the best young players that could help France retain the World Cup.

While it took some time to register Jules Koundé as a Barcelona player, the centre-back finally got his move from Sevilla to Catalonia over the line this summer and will now look to establish himself as a regular in the France team, given Adil Rami will be 37 when the tournament starts and is unlikely to be selected. At 23, Koundé has all the makings of a top defender and his passing range and reading of the game could be invaluable to Deschamps, especially in the early stages of the tournament where sides will set up in a low-block.

Despite plenty of competition for places in that position, with both Dayot Upamecano and Liverpool’s Ibrahima Konaté impressing this year, Koundé looks the most suitable candidate to partner either Lucas Hernandez or Raphaël Varane in the back four.

Of course, a good defence is only as good as the protection it receives from the midfield and while it’s unlikely Steven Nzonzi and Blaise Matuidi will be selected again, having Aurélien Tchouaméni in the side will certainly be a solid addition. The holding midfielder, who left Monaco this summer to join European champions Real Madrid in a deal worth up to £70 million, has already started brightly in the Spanish capital, with a string of good performances easing the blow of losing Casemiro this summer.

If a coach as highly-rated as Carlo Ancelotti is selecting Tchouaméni so often, he’s clearly made a good impression and would be a great option for France to have at the World Cup.

If France do indeed make it all the way through to the latter stages in Qatar, their squad depth will be tested, and having a lightning-fast winger like Moussa Diaby to rely on and run at tired legs will ultimately hand Deschamps a massive boost. The 22-year-old, who applies his trade in the Bundesliga für Bayer Leverkusen, was a target for both Chelsea and Newcastle this summer, but ultimately remained in Westphalia after a deal fell through.

A powerful runner on the ball and tireless worker off it, Diaby might not necessarily be a starter in Qatar but his inclusion in the France squad can certainly be justified by his youthful exuberance from a substitute role.