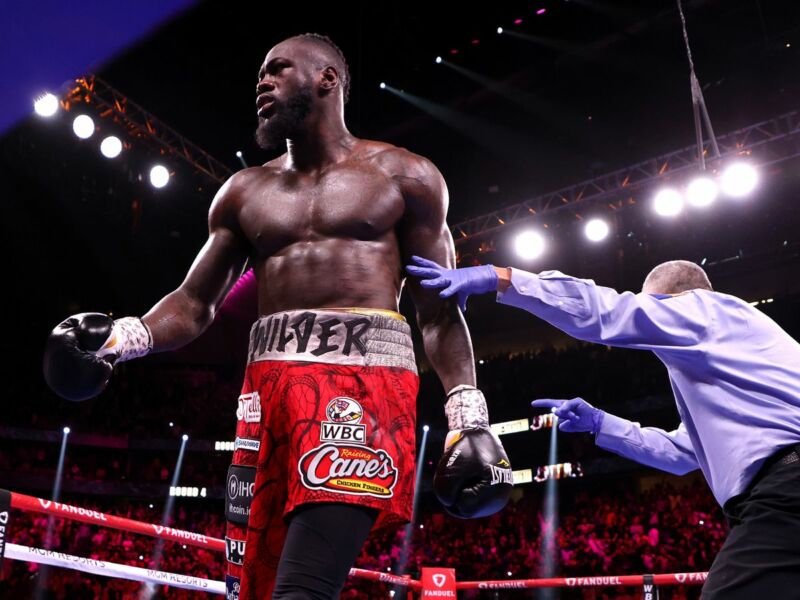 Deontay Wilder will look back on his career when he eventually retires, and in all likelihood, regret trying to claim the scalp of Tyson Fury cheaply. It almost worked, yes, but Fury miraculously rose to his feet during the last round of their first fight together in Los Angeles and from that point on, began categorically unboxing Wilder after returning to the best version of himself.

Essentially, these beatings had been so comprehensive that Wilder had even considered retirement but a year on from his third loss and the Alabama-born heavyweight was set to return. Ordinarily, this would have been the biggest fight of the year, but the latest boxing odds indicate that this is far from the case with the heavyweight industry on the brink of seeing an almighty dust-up between Anthony Joshua and Oleksandr Usyk in the desert that will shape the division as we know it.

Indeed, the Joshua v Usyk betting has been the talk of the industry since the odds came out with the Ukrainian at a price of just 1/2 to beat the Englishman for the second time in a row. It is this highly anticipated showdown in Saudi Arabia that will steal the headlines and overshadow Widler’s return but the question still needs to be asked: what can the world expect from the Alabama native when he returns?

The short answer is that it’s hard to know. To begin with, Wilder has spent much of his time following his defeat to Fury working on his debut music release. It is a pastime that the 36-year-old is passionate about which is why he launched his first single in June to a somewhat lukewarm reaction.

With this in mind, it’s difficult to understand how focused Wilder is and whether he is spending the large majority of his time preparing for his second act outside of the ring or if he is still determined to get back to the summit of the boxing charts. Usually, a boxer’s Instagram account is a good indication of how much they are training but in Wilder’s case, the majority of his recent posts have been dedicated to his fledgling music career.

Of course, it’s important to keep in mind that the news of a fight with Finnish heavyweight Robert Helenius, scheduled for October 15th in New York, has only recently been announced. Put another way, a significant amount of time is still left for Wilder to get himself into fighting shape by undergoing a rigorous training camp.

The Bronze Bomber set for return 💣

Encouragingly for Wilder fans, there was footage shared of him and UFC heavyweight Francis Ngannou meeting in the gym at the beginning of August. During the brief exchange, Wilder can be heard telling Ngannou that he was “trying to get back into the groove” which indicates that the former WBC champion now intends on putting down the microphone and putting on the boxing gloves once more.

Should this be the case then the world can expect Wilder at his best when he enters the ring again, a year after his last appearance in the heavyweight division.