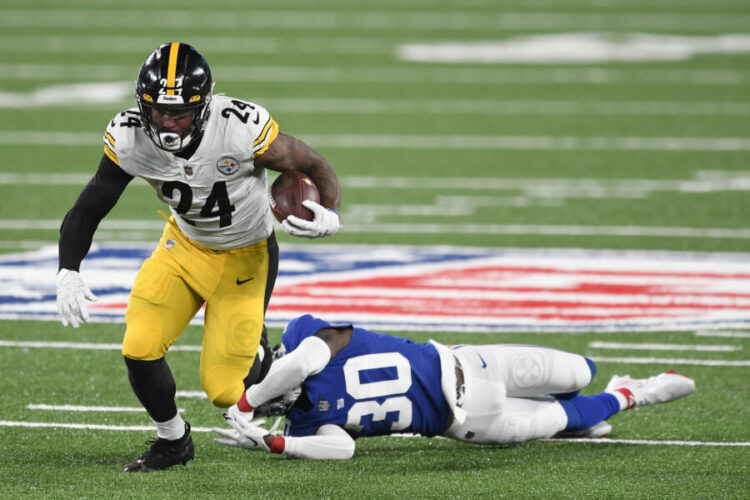 We’re a little under a month away from the start of the 22-23 NFL Season and training camps are heating up across the United States. Players already in consideration are fighting to prove that they’re worthy of their position within their teams and those who may not quite be up to scratch are pushing themselves harder than ever to take that next big step towards the big time. Every football playing kid in the states dreams of lining up for, well, pretty much any NFL team really but particularly a big team like the New York Giants.

That is exactly what Darnay Holmes is hoping to achieve for this upcoming season. The Giants Cornerback has already begun to establish his name in the NFL after being selected as the 110th pick in the fourth round of the 2020 draft and while he hasn’t started every game for the Giants partly due to injuries, he has managed to rack up 23 games across 2 seasons for the New York franchise.

But can he put his hard work to good use and help his team reach the playoffs for the first time since 2016? A playoff run that ended in a wild card loss to the Green Bay Packers.

Now anyone who knows football will know that being a cornerback is one of the toughest jobs on the field, after all, being the guy who has to stop the receivers is no small feat. The receivers are some of the most athletic people in the game, so cornerbacks have to match that, but equally, be strong and smart. Darnay Holmes has always had the athletic part down, he’s pretty strong and can hold his own, maybe the only thing lacking is game IQ? But who can say for sure.

At 24 year old however he has the best years of his career ahead of him still and while there are plenty of rookies in the Giants squad that people have been keeping an eye on, with the likes of Evan Neal and Saquon Barkley around the training ground, so given the fact that Darnay Holmes has been the stand out name this camp is impressive, nobody was really looking out for him after all. Granted, if you look at his statistics from the last 2 seasons (2 interceptions in 23 games) you begin to see why he’s standing out this season.

Those around him have noticed that in the off season Darnay Holmes has improved across the board, he appears healthier than ever, quicker than ever and is seemingly motivated massively by the recent opening at VB after the Philadelphia Eagles acquired James Bradberry from the Giants. Leaving an open position that Holmes is clearly pushing for. But is Holmes the answer to the Giants questions at CB? If you consider that the actual trade deadline isn’t until November 1st, it’s possible that the Giants could find answers elsewhere. But the Giants happen to have Aaron Robinson AND Darnay Holmes to pick from at home and both have been looking impressive in training.

Now, putting in the work in training is one thing but getting results in the regular season is where they need this work to shine, so what do the sportsbooks seem to think about the Giants for this upcoming season? It’s time to take a look at what odds they’re giving the Giants across the board. It’s worth pointing out that none of them seem to be expecting a lot from the Giants and as such they could prove to be the surprise of the season.

First up, there’s the NFC East Division winner. Most sportsbooks seem to be putting the Giants around the 7/1 area, which puts them firmly as the LEAST favourite team to win the division. Because of this, looking at any market that hopes to predict the two teams in the final will give you massive odds if you’re wanting a match up with the Giants in it, ranging from 200/1 for Bills Vs Giants all the way up to 7500/1 for Texans vs Giants. Well, that’s a bit much isn’t it?

Taking a look at some new jersey sports betting sites for the Giants we can see that not only are they seemingly the sportsbooks favourites to be bottom of their division, they’re way down the pack at 40/1 to be the #1 seed overall in the NFC. Not quite as bad as the Falcons or Seahawks but that’s a story for another day.

One interesting thing to point out is, given the two young names that are currently fighting for CB at the Giants, it is seemingly impossible to find any betting odds on either of them. In fact, none of the CB’s that the Giants currently have on their roster have odds on them for defensive player of the year. Granted a CB doesn’t win the award often, but still, no odds is wild!

Now, back to Darnay Holmes. If he’s to be the starting CB, the one Brian Daboll relies on for this coming season, the one that can help the Giants make a playoff push. What could he improve on in particular? Like we said he’s already looking sharp. But on the field, in the heat of the moment when it matters most, what do we need to see from Darnay? The first thing would be making more interceptions. One interception per season isn’t enough by any stretch especially seeing as he was targeted 33 times last season. If he wants to take the step into the elite, then this is one thing he needs to work on for sure!

What else could he work on? In certain situations, using his athleticism he could probably be used to pressure the QB more frequently. Last season he only managed to hurry the QB once and knock the QB down once. Other than that it would just be a mentality thing, but that’s something that comes with experience and as we mentioned earlier, people around him are seeing him act way more mature.

That’s going to do it for this one, it could be an interesting season for the Giants, especially with the battle for CB heating up in house. As I said, there could still be a trade on the cards but perhaps picking from their current roster would be the best option with the least hassle. What do you think Giants fans? Do you agree with the bookies? Do you think you’re gonna be last in your division?

Or are the “experts” overlooking the Giants? They have a couple pre-season games to go but come the 11th September when they take on the Titans, all their questions will hopefully have been answered.

Also read: Paolo Banchero Might Have Added A Boost To His NBA Resume