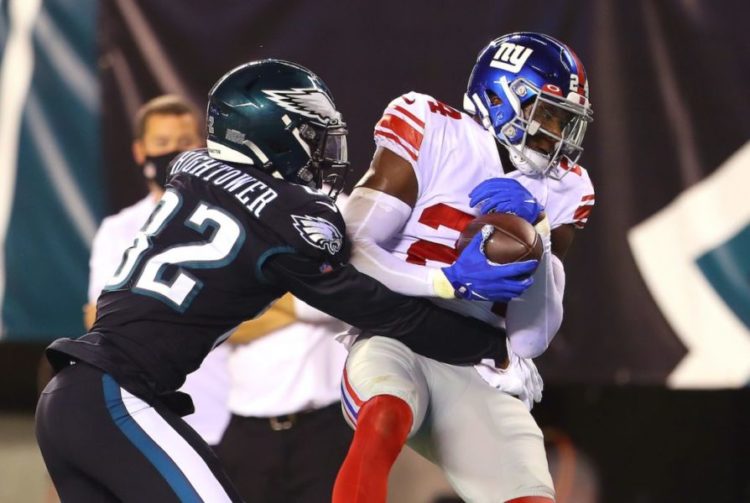 The CB Crisis at Philadelphia Eagles and the Giants’ Solution

The National Football League or the NFL is certainly one of the most popular leagues and people keenly follow the developments in the pre-season team construction of various clubs in the league. This year the Philadelphia Eagles have been particularly a center of interest. Headed by their manager, Howie Roseman, the Eagles stepped up their efforts in building a formidable team before the start of the 2022-23 season. The team had a number of weak spots and the Eagles looked determined to solve them.

When we talk about football, we generally speak in terms of teams. It is true that at times individual names of certain superstar players overshadow the team’s collective reputation. But individual brilliance does not always save the day for you. Winning a match demands a team effort. A team has to be strong in all the sections of the field in order to put up a stellar performance. As a result, football teams from around the world, pay special attention to building strong teams before the start of a new season.

In fact, this weekend has been an exceptional one for them, as they were able to make some brilliant additions to the team. But still, their cornerback position remains the weakest point. However, the New York Giants seem to have solved the problem of the rivals by releasing James Bradbury. Read the article to know more.

A stellar weekend for the Eagles

The Philadelphia Eagles had a number of spots that needed special attention. In what turned out to be a stellar weekend, the Eagles were able to cover up all the loopholes within the team. In March, they were able to sign Haason Reddick, the pass-rusher, on a three-year deal. They strengthened their defensive line by resigning the Fletcher Cox and Derek Barnett. To add to this they drafted Davis with a view to further solidifying their defensive formation.

Further, the additions of Kyzir White and Dean through drafts, have bolstered the linebacking section. However, the most shocking move of the NFL draft this year has been that of A.J. Brown, as the No.1 wide receiver for the Eagles.

Thus the Philadelphia Eagles have successfully put together a much stronger team than the one they had last season. But the starting cornerback position is still worrying the Eagles. Zech McPhearson had only one start in the n last season, defending only one pass and making seven solo tackles.

Thus, the Eagles would not prefer sending him out on the field from the starting. Thus, Roseman will be looking for a proper CB to fill up the only loophole in his team.

The New York Giants seem to have solved the CB crisis

The Eagles are in their search for a proper CB before the start of the season. This position remains their prime concern, as there are not many preferable options available in free agency. However, their arch-rivals, the Giants seem t have provided the Eagles with a highly desirable CB option.

The Giants released the former Pro Bowl CB James Bradbury, on Monday. Bradbury had been a great playmaker in his first six NFL seasons, with 82 defended passes and 15 interceptions against his name. He is also a fit player, missing out on just two games in the last five seasons. All these make him a natural target for the Eagles, who are struggling with their CB position.

Given the crisis of CB for the Eagles, Bradbury’s availability seems to have solved their problems. The stats of Bradbury are sufficiently attractive to invite the Eagles’ interest in him. The Eagles have suffered from multiple injuries the last season. On the other hand, Bradbury missed only two games in his last five seasons.

This speaks highly enough of his strength. Therefore, Bradbury is a great option for the Eagles, as they look to form a formidable team for the upcoming 2022-23 season.