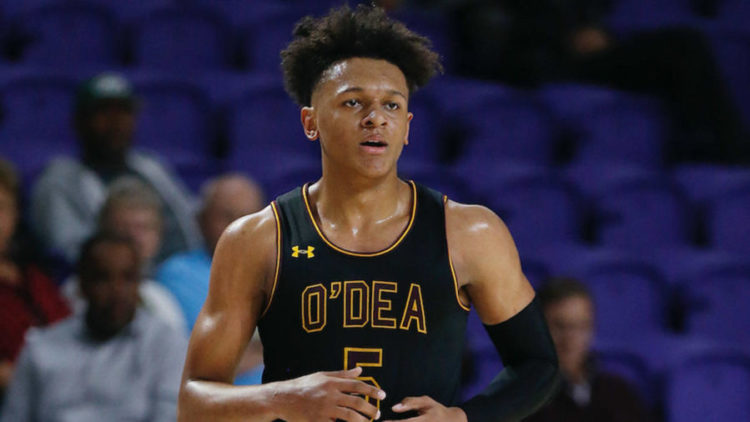 Paolo Banchero has already started to make a mark in the world of basketball. In fact, the Duke Blue Devils’ power forward has been named the ACC Rookie of the Year 2022. Moreover, he is also projected as a top-3 pick in 2022. Therefore, it goes without saying that Paolo is one of the best players in the 2021 batch.

The 2021-22 season was not been a memorable one for the Duke Blue Devils. In fact, they ended the season with a crushing loss to North Carolina. However, Paolo Banchero still managed to put up a glorious performance for the Devils. In fact, he largely lived up to the hype surrounding him. He ended the season with an average of 17.2 points, 7.8 rebounds, and 3.2 assists per outing. Therefore he entered the 2022 draft with a greater boost.

In fact, most of the mock drafts suggest that he is going to be one of the top three picks this season. Read the article to discover more about Banchero.

The Issue About Paolo Banchero Height

While Paolo Banchero played for the Devils, his height was listed at  6-foot-10. Therefore he is never a small guy by any means. However, the Devils fans seem to suggest that there can be more to him. In fact, he might turn out to be much taller than it seems.

Recently Chris Vernon of The Ringer interviewed Banchero, ahead of the Nba draft. An Overtime Elite-affiliated workout session was going on at the time of the interview. Paolo was obviously not officially a part of the session. Vernon explained on  The Mismatch podcast that Banchero came out in the middle of the workout. He was with some of his friends. But as he came closer, Vernon described him as “big”.

In fact, Vernon talked with someone else out there and came to know that Paolo Banchero stands at  6-foot-10, without shoes. Now, this is something really interesting to note.

Though the NBA standardized that their height measurements have to be done barefooted, his towering height seems really intriguing.

Also read: Milwaukee Bucks Get Ready To Face The Heat of The Boston Celtics

What is So Special About The Height?

As audiences, we might think that a shoe will not add any significant change for Paolo. But height really matters in the NBA. If the words of Vernon are taken as true, then Paolo Banchero will stand at 6-foot-10 in the NBA official list. Now, this makes him head-to-head with Kevin Durant. Moreover, with that height, he will go a clean 2 inches taller than Jayson Tatum. Therefore, he will become a player of a different sort in the NBA.

Previously, it would have been easy to think that any manager will prefer to use Paolo as a stretch winger. But now, as we know that he might be a perfect 6-foot-10, that thought seems to cancel out. That height might obviously lead managers to picture Paolo Banchero as an interior player. In fact, with that sort of height, Paolo might be capable of doing much more than just banging bodies in the post.

Therefore, this fact adds a note of versatility to Paolo’s profile. In fact, this pictures him as a forward who will be able to match the heights of most big men in NBA. Therefore, this seems to add a little more to Paolo Banchero’s resume before the NBA drafts.

Paolo Banchero still has a long way to go in the NBA. In fact, he has not yet been inside the NBA. However, we know that morning always shows the day. In the case of Banchero, the morning seems to show a brighter day ahead for him. Therefore, let us tighten our seatbelts as the NBA drafts are about to get rolling.