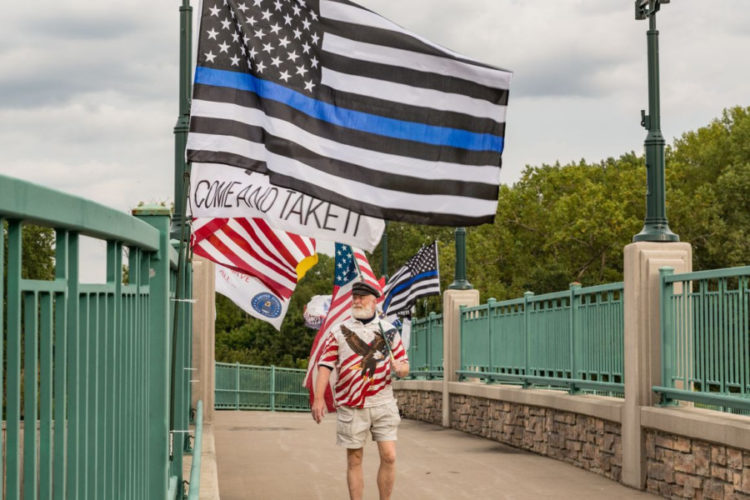 You can know what this flag means for the people of America. Many have used these flags in marches and protests. So know the meaning of this Black and white American flag and also other color variations too.

What does the Black American flag mean?

In the 18th century, the Black American flag was introduced as a symbol of defense. The flag was either entirely black or only the stripes and stars were black or white. Further, they were used during the American Civil War of 1861-1865. The confederate army soldiers used the black flag in the place of the white flag. But in the present day, its meanings have changed. For instance, during the Black Lives Matter protest, the supporters used the flag.

What does the “Thin Blue Line” in the flag symbolize?

The black and white American flag means that no quarter will be offered. But the flag with a thin blue line is different. This flag is used for law enforcement. So the people who use this flag support the police officers who are serving in a dangerous position. When they fly the flag it is an acknowledgment of this fact. Also, it is recognition of all the work they do for their duty.

The Thin Blue Line flag became a subject of controversy over the years for undermining the Black Lives Matter movement. But it has become a well-known variation of the American flag. In the places of the country where there are more Republicans, this flag is often seen. So in the US, this is one form of the variations of the flag which has led to political tension and partisan division.

What are the meanings of the different colored flags?

This flag is used by ecological campaigners. So someone who uses this flag is a supporter of environmental efforts. This design contains the blue field of stars in the upper corner. Then instead of red stripes, there are green. But the white stripes stay the same. Therefore whenever there is a green, blue and white flag then it means that there is a green supporter nearby.

In 2015 a black and the grey American flag was displayed in Washington D.C. It was done to commemorate the MILLION MAN MARCH 2oth anniversary. Many black men gathered in Washington, D.C for this event. The organizer of this event was Louis Farrakhan and it took place in the National Mall.

This event served as a political demonstration of African American unity. Many people marched during this occasion to honor it.

If there is a purple color in place of red and blue areas of the flag then it does not have any specific meaning. This is one popular design of the flag that anybody can use.

This flag was made to honor the book “The Stars and the Stripes” written by Boleslaw and Marie-Louise D’Otrange Mastai. Also, the All-white flag was sold by Paramount Flag Co during the 1970s and 80s. There are also different types of this flag used by many over the years.

The red and black flag is an attention-grabbing flag used to mean punk rock music. So many punk fans use this flag to show their support for this form of music.

What is the meaning of the original American flag?

The 50 stars of the flag symbolize the 50 states of the US. Then the 13 stripes of the flag mean the thirteen British colonies that got independence from the Kingdom of Great Britain. Also, they became the first states of America. Some of the nicknames of this national flag are Old Glory, Star, and Stripes, and Star-Spangled Banner. The citizens of America display the flag in their homes.

The American flag is a vital symbol that depicts the different states of the United States of America. It unites the people. That is why it is an important symbol of the nation.

You may also like: How to Change The Address with The United States Postal Service?