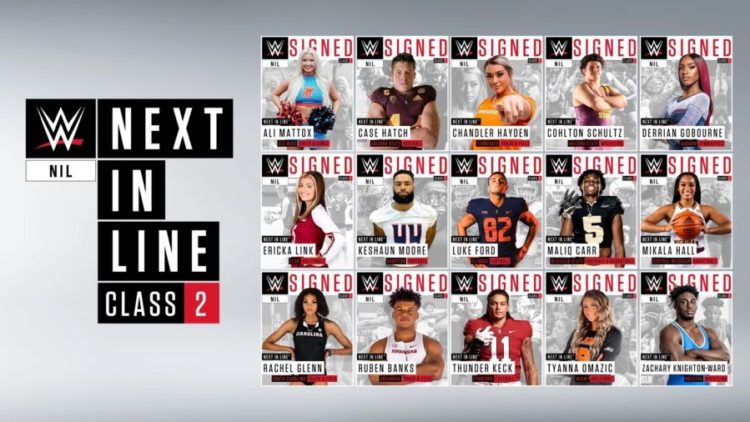 WWE shared through the press that they have unveiled 15 college athletes who will be joining their NIL program. It is the Name, Image & Likeness “Next In Line™” program which offers a clear pathway for college athletes to become part of WWE. The second NIL program is going to have athletes from 14 universities, seven sports and seven NCAA conferences. Also, the program’s first athletes like cheer & dance, gymnastics, volleyball and a lot more.

The fifteen following athletes were unveiled on the evening of the inaugural NIL Summit at the College of Football Hall of Fame in Atlanta. Many talented names were on the list. Here you can find all the details of the NIL program WWE.

What is the NIL program?

In 2012 WWE started the NXT brand to find fresh faces to work for them. Through this program, many wrestlers proved their worth like Seth Rollins, Roman Reigns, and Big E. They all became part of the WEE roster. In 2015 WWE introduced the WWE and this also attracted many new faces and it excited the fans.

Then the WWE’s NIL program was launched in December and it was created to recruit potential future Superstars. It is going to further enhance the WWE’s talent development process will collaborative partnerships with athletes from different backgrounds. Now Next in Line has signed 31 full-time college athletes after its inception and has 25 active athletes.

The company shared details of the NIL program back in July. It happened after the NCAA released a new policy related to college athletes. This allowed the college athletes to get money for their name, reputation, and likeness.

Paul Levesque WWE Executive Vice President of Global Talent Strategy revealed many details about the program. He said that the NIL program offers the potential for the students to showcase their amazing skills. Plus they can join the WWE directly. It is a great chance for them as it is not easy to join WWE a well-renowned sports company through other means. It gives young wrestlers room for improving their skills so they can join WWE after they finish college. They can have a great job ready.

The young will feature will perform and practice at the WWE centres in Orlando, Fla and benefit from the resources in the building like brand building, media training, communications, community relations and more. After the completion of the NIL program, some of the select athletes will get an amazing opportunity to be offered a WWE contract. The six athletes who graduated from the class are in the process of signing a contract or in a discussion with the WWE to join full-time.

Four of the sixteen initial members of WWE’s NIL program are nominated for awards such as the Olympic gold medallist Gable Steveson for the position of Male Athlete of the Year. Then another member Haley & Hanna Cavinder (University of Miami) is selected to get Female Athlete of the Year. Similarly many are getting an award for their hard work.

Who has the largest NIL deal?

Recently a college athlete named Jaden Rashada received the largest deal from WWE. The deal is possibly $9.5 million and it is expected to break records. But it also led to lots of controversies.

Rashada is committed to the University of Miami and many rumours are spreading about his NIL deal’s financial implications. Many speculators are alleging that he refused many lucrative deals. But the attorney of Rashada supported him by saying that the athlete’s decision was not based on money as many people think.

Jaden left millions on the table Caspino revealed in a statement. He did not think of choosing the biggest offer. He signed a deal with WWE because he loved Miami and the coaches. But no one can deny that the deal is massive.

Who was the first person to get the NIL deal?

The first athlete to sign the deal in the NIL program is Gable Stevenson. He is the Olympic medallist in wrestling in 2020. He finished in the first category of 120kg at the Tokyo Olympics 2020. Then in the 202 drafts, he was chosen to play for Monday Night Raw. But he is yet to get his name listed on the main roster. Now he is studying at the University of Minnesota where he is defending for the University of Minnesota.

So because of the NIL program, many young athletes who have not yet finished college can train with the help of WWE. They can learn many important skills which will help them in the long run in their sports career and they can become WWE superstars.

We have to wait and see how many fresh faces we are going to see in the NIL program of WWE. In the future, they can become the superstars of WWE. Until then they can become a part of the elite members of the NIL.