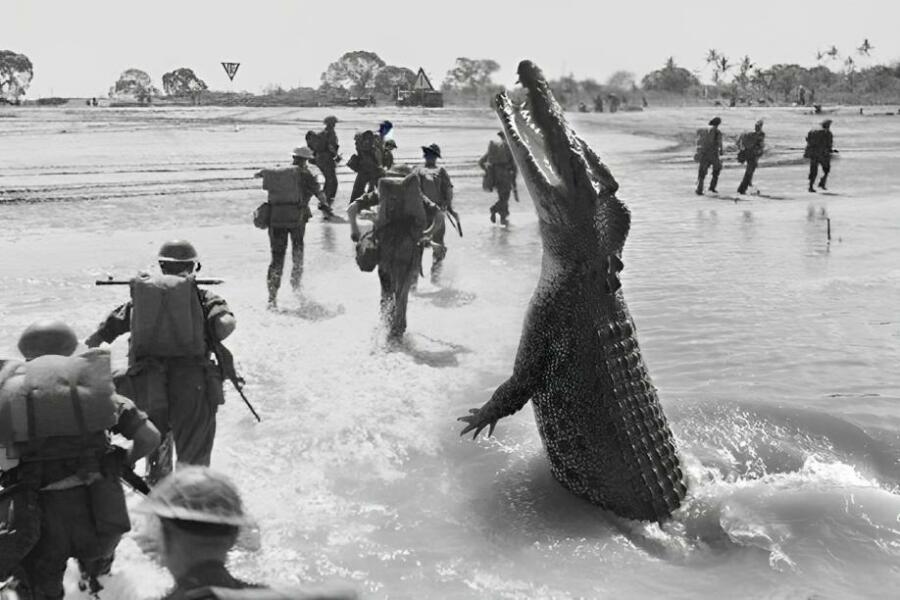 Ramree Island is located off the shore of Myanmar’s Rakhine State, formerly known as Burma. The horrific part it played in one of the most unusual battles during World War II is more popular than its moniker. The Ramree Island Massacre will lead to the loss of hundreds of lives by the time it is over. Given the circumstances, it was difficult to be between a rock and a hard place for the Japanese Imperial Army.

In the latter stages of World War II, Ramree Island was caught up in a conflict. The situation the Japanese soldiers would be in a while fighting British soldiers was rather difficult.

In the area of Ramree Island, British forces sought to secure an airbase. However, the enemies surrounded the location. The Japanese soldiers would be further attacked using this.

Thousands of soldiers from the Japanese Imperial Army engaged in a six-week fight. This left both sides exhausted with no gains.

But as soon as the 36th Indian Infantry Brigade and the British Royal Marines could take advantage of their opponent’s position by outflanking them, the stalemate would see momentum.

The outcome would divide the Japanese combatants into two groups. One of the groups separated into a small faction with about 1,000 troops.

British soldiers could connect with the group and request that the Japanese fighters surrender. They refused.

Instead, a disastrous course of action was chosen, which would prove fatal for the group. The Japanese troops would start an 8-mile trek across a swamp since they had no other way to reorganize.

As one might anticipate, the swamp was full of mud. And had treacherous topography that made it difficult to move quickly through. Crocodiles were also in great numbers there.

Due to these factors, Allied Forces permitted the gang to continue in that direction and merely waited for the inevitable outcome. A rough estimate puts the number of Japanese soldiers killed in the Ramree Island Crocodile Massacre at 900.

The saltwater crocodile is one of the popular animals throughout Southeast Asia and some of Oceania. Making it through a swamp may be challenging for humans, but for them, it’s just another day in the mud.

The largest reptiles on the globe can reach lengths of 20 feet. And weights of just under 1,000 pounds in saltwater and brackish water habitats.

When given a chance, saltwater crocodiles will deliberately seek out humans to consume as food in addition to various other animals.

Many of the crocodiles on Ramree Island could gain the upper hand on their prey at night by taking advantage of their surroundings. An all-too-clear illustration of this technique is the Ramree Island Massacre.

There are some disagreements on what exactly happened in those mangrove wetlands. However, the Guinness Book of World Records listed the incident as the greatest crocodile attack on humans in certain editions.

According to reports, there may have been further deaths at the Ramree Island Massacre. Snakes, scorpions, and mosquitoes were among the various lethal hazards in the marsh that caused these.

There was famine, dehydration, and weariness as well. According to other reports, there were “only” 500 deaths. According to these reports, the number of Ramree Island Massacre survivors could be as high as 480.

Whatever the cause or number of fatalities, it is undeniable that several hundred individuals died from heinous diseases, horrifying fauna, and the savagery of war.

On A Wrap: Watch the Ramree Island Massacre Movie

In final words, if you want to learn more about the story because a movie was made about the World War 2 crocodile massacre.

Saltwater: The Battle For Ramree Island is available to Amazon Prime Video subscribers to stream on their preferred streaming gadgets.

This Glenn Salvage-starring movie will have your heart racing for about an hour and a half.

The Ramree Island Massacre occupies a peculiar spot in history and can remind us of the difficulties our current military encounters. Although not directly facing an adversary, troops are in danger and must make great sacrifices—yet another good reason to appreciate the U.S. military.

Also read: A Step-by-Step Guide on What to Do After Being Attacked by a Dog