Who is Corinna Kopf Dating? 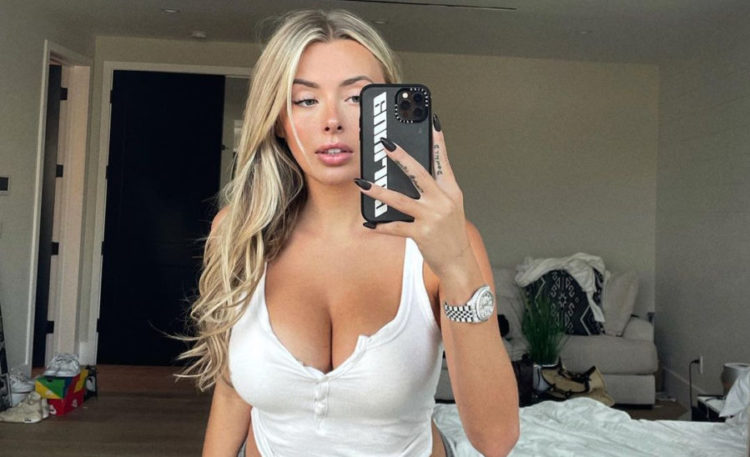 Corinna Kopf is an internet sensation who makes her living showcasing her multifaceted talent. When it comes to launching herself career-wise, she chose to become a model on Instagram. However, with her rising popularity, she easily took over YouTube as well as Twitter. By taking one of the three most significant social media platforms, she has now turned into an Onlyfans model as well.

To add to her accomplishment, she also had created a clothing line of her own. This is something that sets her apart from other streamers. This kind of accomplishment has attracted her attention worldwide. And as a result, she has a wide range of fans from varying demographics. Enough about the careers, now we are coming to her dating life.

Most people only know that Corinna Kopf has only dated Tfue. However, there is much more to the story than what meets the eye. There are many things that we don’t know about her. The kind of person she is, and who she has dated are only the tip of the iceberg.

How Corinna Kopf started on the Instagram platform is something many know. However, her entry into the youtube platform remains a mystery. Although many might have guessed wrong. But her first appearance didn’t take place when she was living with David Dobrik in LA. Rather, their relationship staffed we’ll ahead of it. Both the couple met at a Jack & Jack concert. And soon, they become good friends.

Who is Corinna Kopf?

Let us start with the most common question, which is “Who is Corinna Kopf?”. Corinna Kopf was born on December 1st, 1995 in Illinois, United States. When it comes to her origin, she hasn’t shared much about it. However, we have come to know that she is of German lineage. Her family is based in Germany. So, when she was a kid, she used to visit her grandparents there every summer.

Her mother was a single mother. So, as a result, her mother worked especially hard. She has always shared with her fans that her mother worked hard while Corinna enjoyed her time with her grandparents. Because of her lineage and how she spent most of her time in German, we know that she can speak German fluently. Although, this has changed a bit. As it happens, she now can understand German better than she speaks it.

Her ambitions and anxiety issues have been on the news along with her boyfriend for a long time. Corinna Kopf grew up in the company of dogs. She has become very fond of the canines because of her housing habits. As a result, she recently adopted a dog in 2018. As a child, she loved animals and she still does. This is the reason why she wanted to become a vet.

However, it was in her college years that she understood her potential to become a model. She achieved Instagram modeling fame. So, she decided to drop out of college to pursue a career in modeling. Moreover, she succeeded in making a career in social media and gaming. Although sources have revealed that she has gone through severe anxiety issues from the time she was a child.

When she was seven or eight, she started showing symptoms of anxiety. What started as simple homesickness manifested into separation anxiety. Although it soon snowballed and grew to be bigger. Her father has also dealt with anxiety issues. Nonetheless, he was the one who often took a step up to calm her down. Her father often talked her through her attacks by telling her funny stories.

Corinna Kopf’s dating history is pretty interesting. Although there isn’t any rock-solid proof, her fans speculate much about her dating life. Sources have confirmed that David Dobric was her best friend She even commented that she wouldn’t be where she is now without the help of Dobrik. His friends are referred to by her fans as the Vlog Squad.

If you go through the videos of Dobrik, you would notice the presence of Corinna at least in some of them. One of the most famous relationships is the one where she was with Todd Toddy Smith. He was also a member of the Vlog Squad. The couple documented their relationship on David’s vlog. Not only that, but they also included it on their accounts as well.

As Corinna Kopf shot to fame online using the social media platform, it is not surprising factor that she dated quite a few internet personalities. According to sources, in 2017, she dated blogger, Brennen Taylor. He even went ahead and put up a video regarding the pregnancy scare on his channel. Although they didn’t confirm whether they ever dated or not. Toddy and Corinna have been in a relationship from 2017 to 2018 before they split in April of 2018.

Moreover, David’s video showed the couple splitting up and making up again and again. After she dated Toddy, she was with Logan Paul. They both were spotted at a Lakers game. Although she joked about running into Paul. But fans didn’t believe her. However, in March of 2019, she was then again linked with gaming YouTuber Turner Tenney aka Tfue. Currently, Corinna Kopf is dating Toddy Smith. Although they broke up, they made up again after years and started dating.

Although the dating history of Corinna is pretty interesting, what is more interesting is Corinna Kopf Onlyfans accounts. She has quite a large fan following base which only continues to grow with time.

Also read: Where is David Dobrik Now? Is He Stuck in Slovakia Because Green Card Issue