Will Kyrie Irving and Kevin Durant Coexist in Brooklyn? 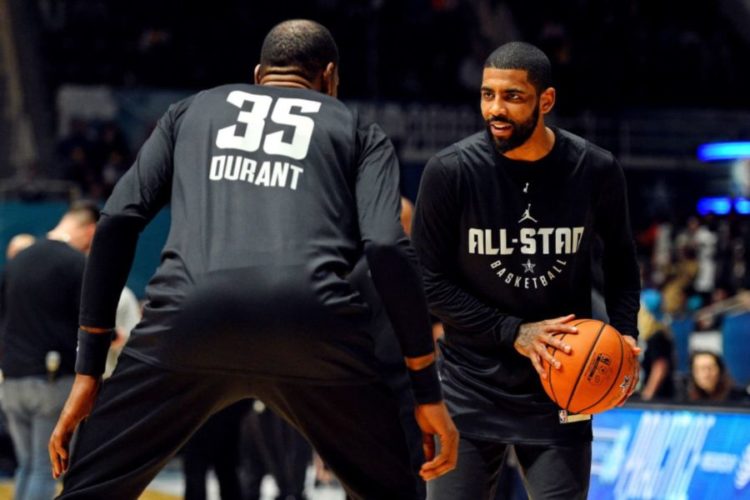 With a successful run in Golden State ending with two titles and two final MVPs, Kevin Durant has signed a four-year contract with the Brooklyn Nets. Alongside Durant, Kyrie Irving has also signed a four-year contract with Brooklyn. Breaking away from their teams, the superstar duo is looking to carve their own paths away from their previous NBA title runs with the Warriors and Cavaliers respectively. Durant, who has been branded a ‘villain’ after his move from the Oklahoma City Thunder to the Warriors back in 2016, comes into Brooklyn seeking redemption.

Irving is in a similar position because of his messy exit from the Celtics, with him previously promising to stay but turning around and leaving for the Nets. He has been branded as a ‘diva’ by many people, because of events that transpired during his time with both the Cavaliers and the Celtics.

DeAndre Jordan commented on the criticism that his new teammates have received. ‘I think it is what it is. People just wanna say [expletive] to have something to talk about. You know, a topic to talk about.  Irving has dealt with numerous injuries in the 2019-2020 season. This includes a knee injury and a shoulder injury that has sidelined him for the rest of the season. Irving’s health has become a massive question mark for the Nets.

When healthy, Irving is definitely one of the top point guards in the league. He has averaged 27.4 points in his 20 games for the Nets this season, his highest average since his last year in Cleveland where he scored 25.2 points. On the other hand, Kevin Durant is considered to be the best pure scorer in the game. He has averaged a staggering 27ppg in his career, winning four scoring titles from 2009-to 2012 and in his MVP season in 2014.

The combination of the two superstars will definitely change the complexion of the Eastern Conference. With the Milwaukee Bucks cementing themselves as the definitive favorites in the East, the Nets are looking to compete with the Bucks and the other contenders.

The Brooklyn Nets will have massive expectations for the 2020-2021 season with a complete lineup headlined by the two superstars. However, they are not the only players who are important contributors to the team. In Irving’s absence, Spencer Dinwiddie has stepped up immensely, averaging 21ppg in the 2019-2020 season.

With Durant’s experience in the Warriors and having to play off-ball most of the time, it is right to have hope in the Brooklyn Nets next season because Irving and Durant’s playstyles complement each other. Caris LeVert and Joe Harris are players who benefit from the space the two stars provide. Meanwhile, big men like Jordan and Jarrett Allen become bigger pick-and-roll threats.