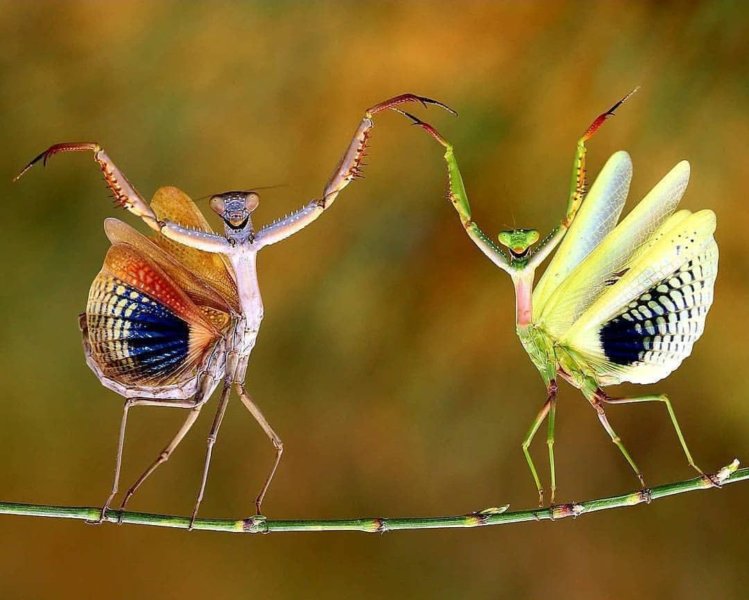 Our ecosystem has numerous creatures inhabiting it. One of those creatures is the little insect praying mantis. So, where does this name come from? Well, the word mantis is derived from the Greek word Mantikos, which means a prophet. In fact, the insect does look like someone doing a prayer. However, these little insects can be horrifying as well.

1. Tropical Area Is the Favorite Spot For Them

There are a lot of species of praying mantis that inhabit the tropic area. In fact, nearly all of them are tropical creatures. You will see the baby mantis going about the tropic area if you ever visit there. Moreover, we know only 18 native species from the North American continent. In addition, 80% of them belong to the family of Mantodea.

2. What Do Praying Mantis Eat?

A praying Mantis is a carnivorous insect. Therefore, it preys on crickets, grasshoppers, butterflies, beetles, and spiders. At times, it also attacks and eats other mantis as well. In fact, they are really tough when it comes to fighting. Therefore, people have also seen them consuming hummingbirds.

So, we got an idea of how much of a predator this little fella is. However, the question is, if you ever feel like holding one in your hand, can it bite you? Well, it’s highly unlikely. Since it doesn’t have any venom, it won’t sting you. However, it can give you a little peck, if it’s an unfriendly one.

The short answer, yes they can. However, they can’t fly like the other insects. It’s like they are clumsy when it comes to flying. Therefore, they can’t fly a lot of distance. Moreover, people know predators as jumpers more than flying insects. Another interesting part is, only male mantis knows how to fly. The female ones don’t even have wings to fly.

5. How Long Do Praying Mantis Live?

Well, it depends on the species actually. In fact, the larger species of mantis generally live longer than the smaller ones. In addition, the female mantis lives longer than the male counterpart. So, to calculate roughly, a mantis may live up to 4 to 6 months. In fact, an orchid praying mantis can live up to 5 to 6 months as well.

6. Protecting The Eggs In Winter

Well, these praying mantis can be really protective. A female mantis drops the egg on a small twig and then protects it with a substance she secretes from her body. Thereafter, it will become a sort of protective case. So, that way, a mother mantis protects the eggs. Furthermore, you will come across a lot of praying mantis eggs in the winter.

Just like a black widow, female praying mantis can also eat their partner after a sexual act for making a baby praying mantis. In fact, in some cases, they would obliterate the heads of the poor male partners. It’s really crazy, right? Well, praying mantis is known for their cannibalism. Therefore, it’s not really surprising, but, one-minute silence for the little soldier.

8. The Eyes Have It But Not So Much The Ear

Well, this is another interesting fact about mantis. So, we have seen their large round, compound eyes, through which they detect their prey, right? However, what if we tell you that these insects have only one ear? yes and in addition, it is located under their belly, and forward to the hind legs. Therefore, it can detect ultrasonic sound.

We will get nightmares from that 180-degree head turn from the movie The Exorcist. So, what if we tell you that these little creatures can do the same? Moreover, this speaks about their flexibility as well. Furthermore, no other insect possesses this type of ability. So what makes them do this? Well, it’s the flexibility of their joint between the head and prothorax that makes them move their head 180 degrees.

10. A Mantis Uses Front Legs to Capture the Victims

So, a praying mantis does like to hold its prey with the front legs in an upright position, as if they are praying. However, this angelic pose doesn’t mean a thing because these insects are predators. So, if by chance, a bug or fly gets in front of them, it’s the end for those little ones.

Thus, we got an idea of how dangerous, yet unique a praying mantis is. So, these were some interesting facts about the creature. So, if you are planning to keep one as a pet, then we hope these pieces of information helped you.