Actors From Bollywood Stand Up For Neha Dhupia Amid ‘Roadies’ Controversy 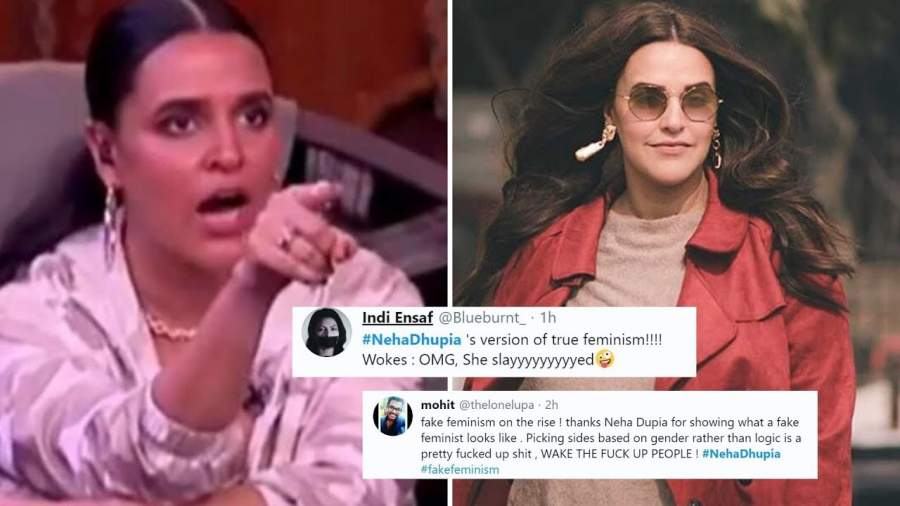 Neha Dhupia has been in the news for so many days. You all might be aware of what all she has been going through. She has revealed that her family and friends are being harassed over her comments on physical abuse in a relationship that she made on the reality show “Roadies”, with people “flooding” her father’s text messages with abuse.

A clip from MTV Roadies got viral

In a clip that has gone viral on social media from the audition of MTV’s “Roadies Revolution”, Neha Dhupia allegedly slammed a contestant who confessed to hitting his ex-girlfriend who was cheating on him with five men.

See what Neha Dhupia has to say about this

The actress had reportedly said that is was the girl’s choice if she wanted to be with five men but nothing justifies physical violence. It was due to this, the actress has been heavily trolled for making these comments, with any calling her as “fake feminist”, a “hypocrite”. Netizens have pulled out that old video of hers from the same show where a female contestant had confessed of hitting someone and Neha Dhupia is seen reportedly smiling.

In a statement on Twitter, Neha Dhupia said she does not stand for cheating, as “adultery is a moral choice” regardless of any gender but she is strictly against any kind of violence.

Clearing her same statement, she further said, “What I do stand for is women’s safety. Sadly, as a reaction to my opinion, I have been subjected to weeks of vitriol. One of my posts had over 56k comments! Yet I was silent but now people close to me who have nothing to do with this – my family, my friends, my co-workers, and even my dad’s personal Whatsapp are being flooded with abuses and harassment. My daughter’s page is nothing less than a barrage of abuses and this is not acceptable to me,”

Neha Dhupia who appears on the Roadies shows as one of the judges among Rannvijay Sartaj Singha, Raftaar, Prince Narula, Vijender Singh, and Nikhil Chinapa. She said what a man or a woman does in a relationship is their choice and moral choices are “always ambiguous.”

“But no matter what they are, they cannot lead to physical abuse. I stand by the fact that no matter what physical abuse or assault is not acceptable. Obviously, a man’s physical strength is a lot more than girls and gender-based violence against women is a huge problem in our country and across the world.

She further added, “I urge people, whether a man or woman, to educate themselves about domestic violence. If you’re a victim of abuse, please stand up for yourself. You are not alone,”

Also read: 5 Parts Of Your Personal Life You Need To Keep For Yourself

Other actors from Bollywood who are in full support of her

Actors Malaika Arora, Taapsee Pannu, Ayushmann Khurrana, Sonam Kapoor, Angad Bedi, Tanuj Virwani, Karan Johar, Amrita Arora, Sophie Choudhary, and many others came out in support of Dhupia after the entire “Roadies Revolution” episode unfolded. Each of them has also penned a note on their social media handles asserting that people should rather discuss and debate the matter and not spread hate online.

Twitter is full of the memes about the Controversy

#hypocritenehadhupia
Hypocricy at its best,splash some water on face aunty ji, @NehaDhupia
People like you are really mocking the serious/prestigious issue of #feminism #shameonyou #shameroadies #antisocialist

Shame on people like @NehaDhupia, who show such double faces on equality !! https://t.co/z6XWMOFHIj

@NehaDhupia having 5 boyfriend and it’s her choice , and the problem lies with the loyal boy !! Sasta maal fukna bandh karo dumbhead #dumb_roadies

If a person is dating someone and he/she dates other people at same time thn he/she is 100% characterless .Here I said it. #NehaDhupia

Also read: 5 Reasons That Will Tell You Why Feminism is Important in Countries Like India

How to Reduce Stress Around Christmas Time?

Launching an E-commerce Site: Plugins You Simply Must Have

Check Out The NZ-41 Warzone Loadout: Know About The Attachments, Class Setup, Perks