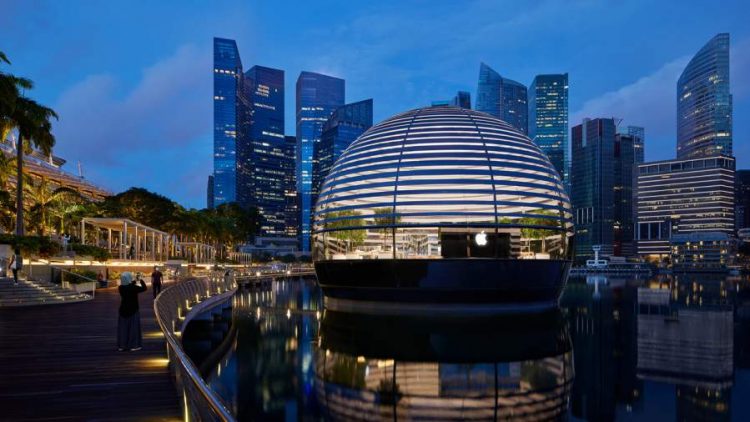 Apple on Monday revealed the world’s first floating marina bay store in Singapore. It is the most ambitious project of the tech giant till date. The store sits on the water which is the popular attraction of the locality now. It is a floating object that provides uninterrupted panoramic views of the city and also its well-known skyline. The designer of this incredible project is foster + partners. The store is in the shape of a sphere built with 114 pieces of glass. The dome is a structural connection that can float well.

The well-built design impressing many

The store opened its doors to the public on Thursday, September 10. The locality of the store is one of the hotspots in Singapore. It is near to the Marina Bay Sands hotel and casino. Apple’s SVP of Retail and People stated that the company is excited to open the Apple Marina Bay Sands. They were planning to build a special store for 40 years. Now the dreams have come true. It is a breath-taking store located in an upscale area. So definitely it has become one of the popular sports in the locality.

The beauty of water surrounds the store and the dome provides a 360-degree view of the city. The company has shared that the design of the sphere is unique forming a beautiful structural connection. The dome looks similar to the pantheon in Rome which is one of the historical attractions. In the nighttime, the store looks even more brilliant because of the lights. So it is certainly a sight to behold. There are trees in the interior of the dome that offers extra shading and shadows for the lighting effect.

In the lower level of the store, there is an underwater boardroom where the businessmen and developers can meet up with Apple members to get training and advice. The visitors can also view the stunning dome. There is a video wall inside the dome which serves as the arena for ‘Today at Apple’ sessions. It is a stage for musicians, artists, and creators in Singapore who will take part in the sessions.

Who will be available inside the floating Apple store?

There will be over 150 Apple employees working in the floating store who will speak more than twenty-three languages. This is to make customers visiting the store to feel at ease and receive excellent service.

The visitors can get a glimpse of the curated products of Apple and also get technical support from the agents. So they can admire the look of the store and get their job done.

We can say that the tech giant Apple is always ahead of its competitors. The company also proves that it is above par in technology and marketing strategy. Surely this store will attract lots of customers in Singapore. More details of the store will get revealed in time. Until than admire the photos of the store.

The floating store of Apple in Marina Bay Singapore is a great innovation. There is no other company that has its store in a floating dome with lights. Apple is very proud of its creation.

Also read: ‘Tehran’ Season 1: Apple TV+’s Thriller is Going To Be Better Than ‘Fauda’ – All Details