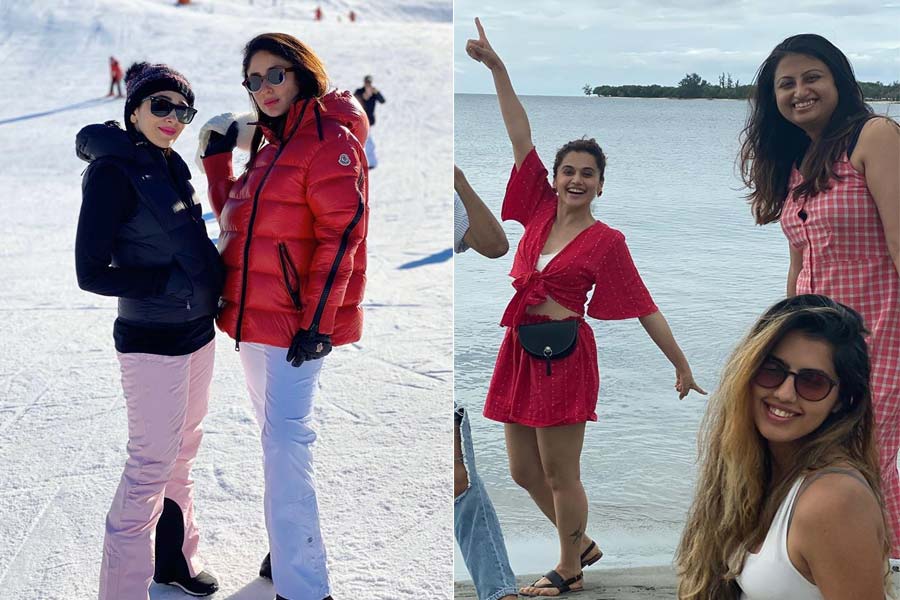 New Year is that time when most of the Bollywood stars fly to their favourite destinations to ring in the joy of New Year. Well, this is not something new to mention. This year also some of the top Bollywood celebrities have gone out of India to usher a brand New Year. We have Spotted Virushka, Varun Dhawan with beau Natasha Dalal and Parineeti Chopra who have enjoyed their holidays like there’s no tomorrow.

Let’s see further how these celebs have celebrated their New Year in style.

Let there be snow ☃️?wishing everyone out there a very happy new year 2020

Varun Dhawan along with his girlfriend, Natasha Dalal has been spotted spending their quality time in the snow-capped mountains in Switzerland.

Bollywood’s hotty and most glamorous diva, Malaika Arora was found spending time with her sister Amrita and her husband Shakeel Ladak in Goa along with some of their friends.

Also read: Heartwarming Pictures of Kids Who Just Got Adopted will Surely The Best Thing You Will See Today

Hot chocolate with a view ❄️❤️☃️

One of the top actresses, Parineeti Chopra was seen chilling in the cold winters at Munich. Her latest Instagram post shows that she is in Austria now experiencing an even colder climate. She posted on her social media, “Hot chocolate with a view.”

So… no complaints ❤️?? ? @cavanaughjames

Well, on the other hand, Priyanka Chopra was seen enjoying with hubby Jonas Brothers, Nick Jonas. But no one knows about their destination where they have been spending a good time. Previously, they were spotted in Mammoth Lakes, California.​ Even they have posted many pictured from their vacation on their social media. Nick has shared a loved-up photo without revealing the destination and captioned it as, “From the snow to the ocean. #lifeasitshouldbe.”

Also read: This Young Couple Earns a 6 Figure Income by Travelling The World

Not a destination but a journey…. #Sisterhood #TravelBums #TapcTravels #Puchi #Mauritius

Taapsee Pannu has also hit the beach at Mauritius to welcome the New Year with a bang. She said, “Not a destination but a journey…. #Sisterhood #TravelBums #TapcTravels #Puchi #Mauritius,” She captioned the picture along with her friend she captioned a photo in which she and a friend are seen appreciating the view.

One of the cutest couples of Bollywood, Soha Ali Khan, and Kunal Khemu were spotted celebrating their holiday season in Sydney, Australia. Kunal captioned the pic as, “New year New Day #2020” where he is enjoying the view of the ocean with daughter and wife Soha.

Kapoor’s are known for their frequent visit to Switzerland, especially in December. This time also Kapoor sisters were spotted in Switzerland where they could be seen enjoying too much in the snow.

The power couple of the Bollywood has also enjoyed their New Year between the mountains. They are currently chilling and skiing in Gstaad, Switzerland. Well, if you will have a look at their pictures you will get to know how much quality time they have been spending together.

Well, it seems Switzerland is one of the favourite destinations for most of the Bollywood stars as they have been spotted enjoying and spending good time with their loved ones there while others have seen enjoying in Australia and not to forget our very beloved Goa.