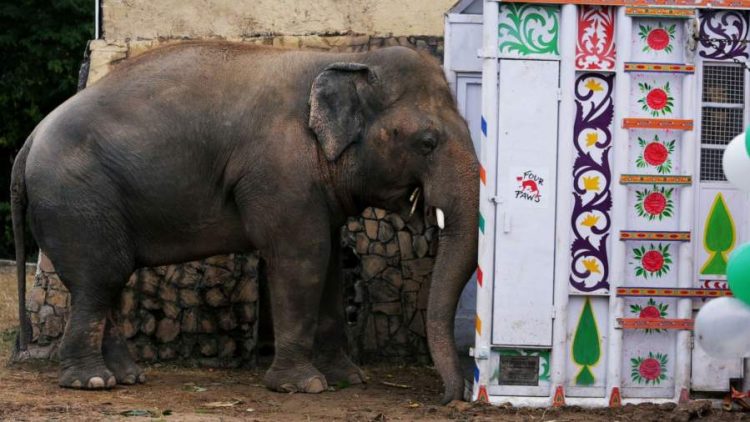 The popular American singer Cher has welcomed the world’s loneliest elephant to a new home. The creature got rescued from terrible conditions from a Pakistani zoo and now has found a home at a sanctuary in Cambodia. The name of the elephant is Kaavan which is a thirty-six-year-old elephant. It looked sick and many animal rights activist started campaigns to save the elephant.

Then Cher supported the campaign through social media and travelled to Pakistan to save the elephant. Then she brought the elephant to Cambodia and gave it a new home. She wore a black mask and went to receive the elephant which got transported through a flight. The plane landed on Siem Reap airport at 2:30 pm.

Cher shared that she is very proud to be there. She also said that the elephant will be happy at his new home. Now the ordeal of Kaavan is over. The Oscar winner also wrote songs for the elephant to release him from the badly maintained Islamabad Zoo. She also met up with a crew who documented the life of Kaavan. For more than seventeen years Kaavan lived in a dark shed with no nourishment.

Just Came From Meeting To Thank Prime Minister Imran Kahn For Making It Possible For
Me To Take Kaavan To Cambodia. Kaavan Will Be Able To Leave For Cambodia On The 29. Think Documentary Will Be Heartwarming??.

A good journey undertaken by Kaavan

The journey of Kaavan did not have any problems. Veterinarian Amir Khalil shared that he travelled in the flight like he was a frequent flyer. Kaavan ate in the flight and did not look stressed. He also slept by leaning at the wall of the crate. Transportation of an adult elephant is a hard task and it has happened only a few times before.

The trip got arranged with 200kilos of food for the elephant. It took seven hours for the elephant to travel from the zoo to the destination. A tube system got installed in the flight which is a Russian cargo plane. The tube helped to manage 200 litres of urine. After Kaavan landed he got visited by monks who sprinkled holy water on him and welcomed him. Then the transporters put him on a trunk and took him to Oddar Meanchey province where a wildlife sanctuary is available. Cher also followed the truck.

Neth Pheaktra the deputy environment minister shared that Cambodia is happy to welcome Kaavan and he will no longer be the loneliest elephant in the world. They are also planning to breed Kaavan with the local elephants to save the genetic fold. Moreover, Cher shared that it is one of the greatest moments in her life.

Now many animals have got removed from the Islamabad Zoo and still many others remain. Hope they will also get a new forever home with good conditions.

Also read: Animals Which Are Under The Threat Of Getting Extinct, It’s Because Of The Cruel Acts Of Humans