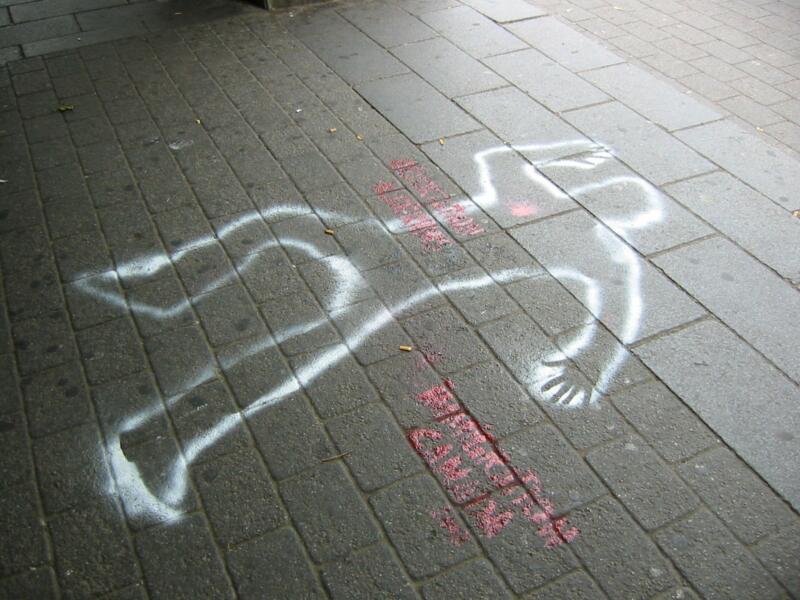 Crime scene photos are one of the most bizarre pictures in history. The photo and their chilling back story show the true horrors behind the crime. These true crime stories are surely terrible but there are some people out there who are curious to read such stories. Due to this, you may want to take a look at crime scene photos.

Also, there are lots of serial killers in the past who have been arrested. For evidence, the photos of such cases still exist. Most of the crime photos in history are in black and white colour. However, the effort to gather these clues by the cops is huge. Now let us take a look at exclusive crime scene photos of serial killers and merciless murderers.

The picture of the first ever photo of a crime scene

Forensic photos have been part of the crime scene for many decades. These photos are the main evidence to catch the killer. However, you need to know about the first-ever forensic photo taken at a crime scene. The first photo dates back from 1903 to the murder scene of Parisian women. Madame Debeinche is the victim of this crime who is dead in her apartment.

They did have the photo of victim’s body and her limbs twisted unnaturally. This is the time when the police department thought that Forensic photos are useful. These photos help to see the evidence even after cleaning of the crime scene.

The use of forensic photos becomes official in the police department

Alphonse Bertillon is the first forensic photographer. He is the man who suggested the importance of such photos. He took a photo of not only the victim but the entire crime scene.

Taking photos of blood stains, furniture, doors, and everything made it easier to solve the case. Bertillon also invents a tripod to have a centre focus on the camera while taking photos of the victim’s body.

This top-view tripod that helped to take clear photos of the victim later became popular. Due to this, the forensic photos are a crucial part of the police department. The effort of Bertillon proved useful to solve crimes. Further, the cops also start to take mug shot images of criminals after making forensic photos official.

Forensic photography is important for investigation. However, several true crime fanatics collect these photos. Few people who are curious to read about true crime can easily find the photo belonging to a serial killer.

Even though, the crime scene photos in history are in black and white few details allow people to know what crime it is. There is a photo of a murder scene that is trending on the internet.

In the photo, a criminal is holding a spade card in his blood-filled hand. In this photo, some people predict that the photo belongs to a mafia king. For many years people are collecting such crime scene photos.

Even though some of the photos are bizarre this does not stop the true crime fanatics. Let us see more about some of the brutal crime photos of victims of serial killers.

The horrendous serial killers in history and photos of their victims

There is one true crime story that still terrorizes people. Charles Manson was a serial killer who did brutal crimes in America. There are several Manson murders and the crime scene photos which are still preserved. Sharon Tate’s murder is one of the most horrifying homicide cases you will ever hear. The brutality of this murder is photographed by the forensic department.

The victim is Sharon Tate and her friends. At 10050 Ceilo drive, Sharon and her friends were together in the mansion.  Manson and his cult members after breaking-in murdered five people in the house. The victim’s body was lying in the garden, in the house and bedroom.

Through the photos, people could see the blood-filled mansion. Also, all the victims were killed by stabbing several times. The photos of the nerve-wracking murder scene exist even today.

Serial killer ED Gein disturbingly killed many victims. What he did to the victim’s corpses is even more upsetting. One day a missing person report came to the police. A hardware store owner suddenly went missing. When investigating they find that the last person in contact with the owner is ED Gein.

When making an arrest cops could find shocking details about Gein. They found that he was not an ordinary criminal but a serial killer who has murdered several people. Also, ED Gein used the victim’s body to decorate his house.

After dissecting thee corpse he made lamps, curtains and much more. The gruesome pictures of this crime exist even today. These crime photos remain evidence of the horrors of the past. Also, Buffalo Bill’s character from Silence of Lambs was created after the serial Killer ED Gein.

Do you want to know about the horrific crimes in history? Then take a look at the above crime scene photos and their story. These photos are a crucial piece of evidence that helped investigators to solve the case.