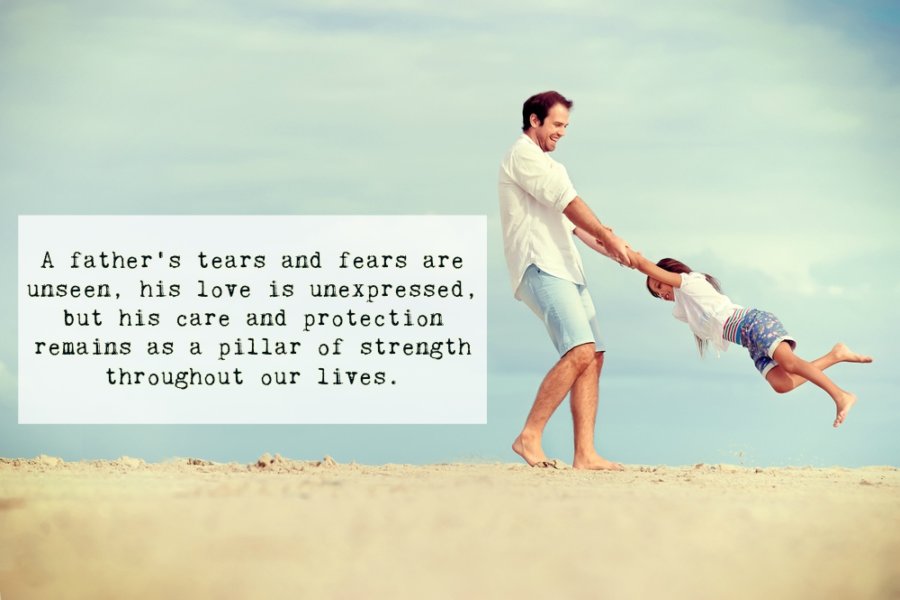 Every familial relationship on earth is special. But the relationship between a daughter and father is very special. It is because the daughter is her daddy’s little princess. They cannot stay away from each other for many days. When a father comes back from his home the first one to hug him will be his little princess. Also, the daughter feels protective when her father is there with her. So the father and daughter bond is unbreakable.

When the daughter leaves for college or gets married the first one to miss her is her father. He gets anxious about her future but still, he lets her go for her to face her life’s adventures on her own. Also, he believes that he has taught her well to handle all the problems she may face. But the daughter carries away half of his heart when she moves away to her life. This is reality, but still, they are always together.

Are you your dad’s princess? Then here are some amazing Daddy Daughter Quotes you can read to know the specialness of your bond. You can also send some of the quotes to your father and know how he feels about it. So have a look at the quotes and enjoy.

To a father growing old nothing is dearer than a daughter.

A daughter’s first love is her daddy.

It is admirable for a man to take his son fishing, but there is a special place in heaven for the father who takes his daughter shopping.

I am not ashamed to say that no man I ever met was my father’s equal, and I never loved any other man as much.

I’m proud of many things in life, but nothing beats being a father.

There’s two things I know for sure: She was sent here from heaven and she’s daddy’s little girl.

If you ever want to torture my dad, tie him up and right in front of him, refold a map incorrectly.

When my father didn’t have my hand, he had my back.

Dear daddy, no matter where I go in life, you’ll always be my number one man.

Anyone can be a father, but it takes someone special to be a dad, and that’s why I call you dad, because you are so special to me.

When you’re young, you think your dad is Superman. Then you grow up, and you realize he’s just a regular guy who wears a cape.

When my daughter says ‘Daddy, I need you!’ I wonder if she has any idea that I need her billion times more.

There is no place higher than on daddy’s shoulders.

Some superheroes don’t wear capes. They are called Dad.

You fathers will understand. You have a little girl. She looks up to you. You’re her oracle. You’re her hero. And then the day comes when she gets her first permanent wave and goes to her first real party, and from that day on, you’re in a constant state of panic.

A girl’s first true love is her father.

When I’m at my best, I am my father’s daughter.

A father is a son’s first hero and a daughter’s first love.

A little girl giggles when she is denied an ice-cream by her mother. She knows daddy will get her some later.

There’s something like a line of gold thread running through a man’s words when he talks to his daughter, and gradually over the years it gets to be long enough for you to pick up in your hands and weave into a cloth that feels like love itself.

Daddy, you have been many things to me; my chauffeur, my financial support, a listener, a life mentor, a friend, a guardian, my hero…But what I am most grateful for is that you have always been there for me whenever I have needed you.

The bond that links your true family is not one of blood, but of respect and joy in each other’s life.

Dad, you’ve always been the coolest – like all those times you said ‘yes’ when Mom said ‘no.

One of the greatest things about daughters is how they adored you when they were little; how they rushed into your arms with electric delight and demanded that you watch everything they do and listen to everything they say.

Being a daddy’s girl is like having permanent armor for the rest of your life.

Some people don’t believe in heroes, but they haven’t met my dad.

Fathering is not something perfect men do, but something that perfects the man.

There is this girl who stole my heart and she calls me Daddy.

Certain is it that there is no kind of affection so purely angelic as of a father to a daughter.

My father was the one who taught me to value myself and I am forever grateful.

He sweeps her hair back from her ears and he swings her above his head. He says she is his émerveillement, he says he will never leave her, not in a million years.

A father holds his daughter’s hand for a short while, but he holds her heart forever.

To the world you are a dad. To our family, you are the world.

The heart of a father is the masterpiece of nature.

Daddy, thanks for being my hero, chauffeur, financial support, listener, life mentor, friend, guardian, and simply being there every time I need a hug.

When I come home, my daughter will run to the door and give me a big hug, and everything that’s happened that day just melts away.

They say that from the instant he lays eyes on her, a father adores his daughter. Whoever she grows up to be, she is always to him that little girl in pigtails. She makes him feel like Christmas. In exchange, he makes a secret promise not to see the awkwardness of her teenage years, the mistakes she makes or the secrets she keeps.

Old as she was, she still missed her daddy sometimes.

My Daddy was my hero. He was always there for me when I needed him. He listened to me and taught me so many things. But most of all he was fun.

My father gave me the greatest give anyone could give another person: He believed in me.

Fathers, be your daughter’s first love and she’ll never settle for anything less.

He loved his daughter better even than his pipe, and, like a reasonable man and an excellent father, let her have her way in everything.

A son is a son till he gets a wife; a daughter is a daughter for the rest of her life.

A daughter needs a dad to be the standard against which she will judge all men.

I am a princess not because I have a prince, but because my father is a king.

My dear father; my dear friend; the best and wisest man I ever knew, who taught me many lessons and showed me many things as we went together along the country by-ways.

You brought me every single toy that I wanted when I was young. I hope I can return the favor when I grow up by achieving every single goal that you always wanted me to. I love you.