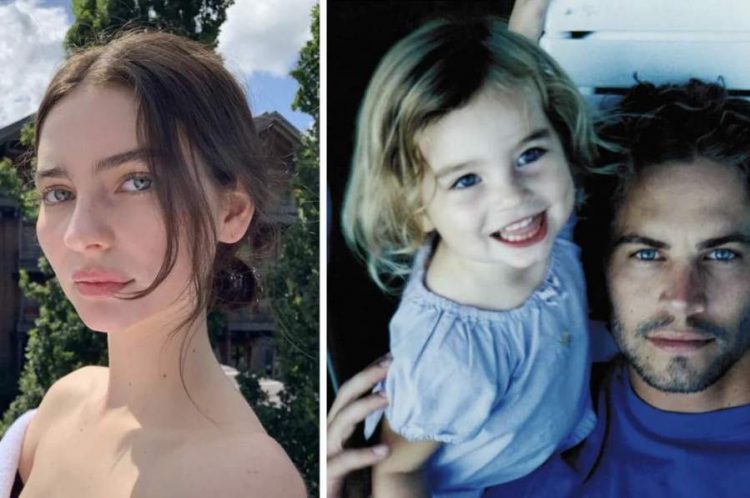 Meadow Rain Walker is the Daughter of a famous actor Paul Walker. She was born to Paul Walker and his girlfriend Rebbeca on November 4th 1998. Unfortunately Paul died in a fatal car accident in 2013. He was best known for his movie series Fast and the Furious. Meadow mostly spent her childhood in Hawaii, where her mother kept her away from the glam of Hollywood. While during her teenage she started spending time with her father, and she used to visit the sets where her father used to shoot.

However in 2011 she started to live with her father at his residence, and she was also invited to the fund raising event that her father was going to attend right before his death. She did not attend the event due to her other plans that day.

Meadow Rain Walker started a charity organization ‘Paul Walker Foundation’ in 2015 after having the legacy of her father to her. Most of the celebrities or actors that worked with Paul Walker in Fast and the Furious, visit Meadow Walker regularly and also invite her to their movie premieres.

Many actors do not wish to talk about their love child. But Paul was one who used to openly talk about his daughter, because he knew that he is a proud and loving father for his daughter. Therefore working with Vin Diesel in the Fast and the Furious movie series, Paul chose Vin as the godfather for his daughter Meadow Rain Walker. Meadow spent her early ages of childhood in Hawaii where she spent most of the days with her mother.

However Meadow was very good at studies, but she was also inclined toward show business, and she loved to visit the sets of movies where Paul used to shoot. Now because she visited there regularly she shared a good bonding with the co-stars of Pual Walker on the Fast and the Furious sets.

She was 13 when she moved to California to live with her father. Therefore, she took a good education there, and was also keen to work in Hollywood.

Meadow Rain Walker’s mother Rebecca raised Meadow till she was 13 years old, after fighting a battle with the alcoholic abuse that caused her to give up Meadow to her father. While at the age of 13 Meadow moved to California to love with her dad Paul Walker, she had no idea that she was spending the most precious last days with her father, before his  death.

Meadow Rain Walker is a model, she started her career doing modeling for brands. It seems that she is all set to follow her father’s footprints and to fulfill his dream that remained unfinished.

However, Meadow is also a social worker now, as she started a charity foundation in the name of her father, Paul Walker Foundation, in 2015.

Whom Paul Walker’s Daughter is Dating?

Well, the answer to this question is that Meadow Rain Walker is currently single. Right now she seems to be more career oriented than being dating anyone or being in a romantic relationship. Meadow is a great and keen social server, and she is actively working for it. In September 2017 she had posted a picture where she was seen donating a food bag.

Additionally, she also said that she will be donating food bags to the homeless people as well. Apart from this, Meadow is a fan of Justin Bieber, however Justin is also her friend. So after the death of Paul Walker, Justin invited Meadow to his premier for Believe on 18th Dec 2013.

What is Meadow Rain Walker Net Worth

The pretty star kid is 22 years old now as of 2021. Even at this young age she managed to have a million dollars of income as a successor of her late father. After the death of her father on 30th Nov 2013, Meadow became the sole beneficiary of her dad’s net worth of $25 millions. Right now Meadow lives at her father’s residence worth $10 million. After having all these, Meadow Rain Walker lives a lavish and good life.