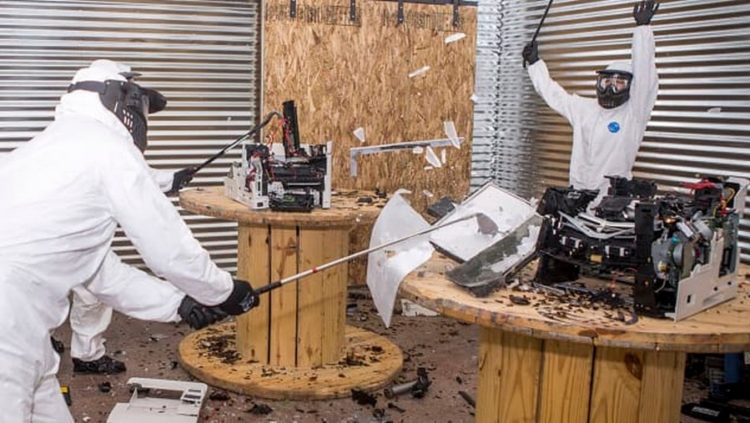 Many people like to smash something after a long day’s work. In this way, they try to release all the tension. Some people try to cut logs while others throw random stuff to get rid of stress. But do you know that there are rooms specifically allotted to control rage. They are called rage rooms. So what is a rage room?

The rage rooms, anger rooms, or smash rooms are opened in the cities around the world today. Many people use these rooms to control their rage. It offers a safe place for people to release their pent-up anger. There are many properties available in these rooms such as plates, sledgehammers, and golf clubs to shatter other things. For instance, one can throw away the plate across the room and give release for their emotions. Or they can also smash objects with the sledgehammer. The rage rooms have become popular because people require an outlet for their anger. But are rage rooms beneficial for stress relief? Here you can find all the details about the use of these rooms.

What is the origin of rage rooms?

The first kind of rage rooms opened in Japan in 2008. After that the concept of rage rooms became famous. It spread across the countries like Serbia to the United Kingdom to Argentina. Today there are many rage-rooms or anger rooms in the US. Many rage rooms are opened in cities like Charlotte, North Carolina, and Tuscon, Arizona. Now the these rooms have become affordable. But prices vary according to the comfort offered in the rage rooms.

What are available in the rage room?

In Glen Maryland, the visitors can pay as little as$15 for the package called BYOB. With this package, you can bring a keepsake of your own which you want to break. Then in a rage room in New York, there is an offer of Couple’s Therapy package that comes with two electronic items, ceramic plates, two buckets of dishes, and more. You have to pay $95 for this package. Similarly, different types of innovative packages are offered in the rage rooms.

How do the rage rooms work?

The people who enter the rage rooms are given some tools used for breaking and shattering everything in front of them. They are opened in many countries with permission from the Ministry of Health. It is more acceptable for people to go to rage rooms to vent their anger than to indulge in violent deeds.

It is thought of as a relaxing method for people. After coming out of the rage room people feel satisfied and light. It is as if the huge burden is off their shoulders. These rooms are helping those with anger issues. But this room is not a therapeutic cure for people with chronic anger problems. It is considered healthier than taking drugs, smoking, and drinking.

There is not any specific research done on the benefits of the anger rooms. But many people think that these can serve as an outlet. Also, there is a belief that it helps people to learn good management skills. The idea behind Rage rooms is around for a while. So the people who want to break something in anger get an outlet to break things. They instantly book a rage room and release all the pent-up tension in it. But studies are still going on to know if the rage rooms are good or bad. Some existing studies give us some clues about the benefits of the rooms.

There is a catharsis theory about aggression that says that if people can release their anger and frustration then their anger will decrease. This is the theory that is believed for many years. But the research debunking this belief is also there.

One study conducted in 1959 gave some angry people the opportunity to hit some nails with hammers for ten minutes. The researchers wanted to know if that action enabled them to lessen their anger. But the other subjects were left to wait ten minutes without any physical activity. The results showed that the hammer-wielding subjects were angrier than the other group of subjects. So the catharsis theory is not the best way to get rid of anger. It also shows us that acting on anger is not always the best idea.

Is venting anger the best idea?

Many researchers are suggesting that increased aggression can only become even more serious if people vent it by breaking or destroying things. So the answer to the question is that rage rooms can be used for entertainment purposes. But whether they can be used to vent anger is a huge question. Many people try to vent their anger by punching a punching bag. They think that they can use it as a way to release their pent-up anger.

But studies show that they only get used to releasing their anger in some way. They may even hit a bystander to vent their anger. So the ways to release anger can also lead to dangerous situations. Even-though their anger may decrease for a while; in the future, it is likely to increase even more.

What are the healthy ways to manage anger?

There are many ways to control anger and manage stress. Here are some of the healthy ways to get relief from stress.

Rage rooms have become popular today. Many people are visiting these rooms to reduce stress and anger. But moderation is important if one is frequenting these rooms.

Also read: How are PTSD and Stress Affecting so many Athletes and Celebrities?